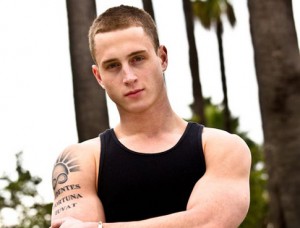 Frankly if you haven’t heard of Chet Haze, it’s understandable. But you’ve probably heard of his father. Tom Hanks is a multi-award winning actor, producer and director, but Chester (born Hanks) isn’t planning on going into the family business just yet.

No, this year marked the launch of his hip-hop career in a dirty frat basement at Northwestern University, where he’s a sophomore. His first mix-tape details his experiences with drugs, drinking and being an all-round achiever, providing some valuable insights into, well, being Tom Hanks’ son. Tracks include “Adios Motherf****r”, “Roll Up” and “Chivalry.” In his remix of Wiz Khalifa’s “Black and Yellow,” called “White and Purple,” Chet describes an average night in Evanston: “I got a call from the brothers in the frat house/ I’m with my girl, tryin to get up under that blouse/ She a freshman/ She a freak though/ In the bed, but a lady in the street, yo.”

Yes, Chet’s music is boringly explicit, aggressive and generic—frat boys have sung about much worse—but it’s also hard to ignore. Whether it’s the Hollywood genes, or the image of Forrest Gump rapping to a hip-hop beat, everyone from the Washington Post to the UK’s Daily Mail has found him uninspiring and very, very self-assured. Despite the fact that he was more talented in “Bratz: The Movie” than he is with an expensive microphone, Chet actually believes that he’s good.

Perhaps his confidence spurned him to invite me to record a song with him in January, through the savvy medium of Facebook chat. “No grenades,” wrote Chet’s ‘friend’, suggesting that I bring only attractive girls with me, “and you have to sing about smoking weed with him.” I politely declined. There was no way that Chet Haze, a seemingly well-educated and terribly conceited rap-star from Northwestern, was going to make a fool out of me. (Lauren Kelly-Jones)