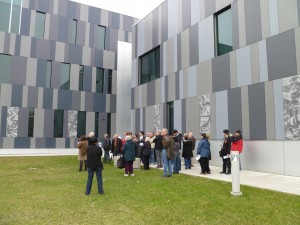 It’s an early wake-up call for participants in the “Emerging Chicago” tour—which changes annually and selects breakthrough designs—with the Chicago Architecture Foundation. “Everything we have focused on so far has been on the forefront, on the cutting edge,” Nancy Cook, tour director announces on the way to the first location. “And I’m thrilled to say that we’re on the cutting-edge again.”

Ronan meets the group at both institutions and offers his input, explaining his inspiration. At Christ the King, the building is concentrated on the Jesuit belief Corus Personalis, or care of the whole person. “The building is conceived like a body—the vital organs being the chapel, library, gym and cafeteria,” Ronan says. At Gary Comer, which works in conjunction with the youth center that shares its namesake adjoining the school, Ronan chose an almost-neon-greenish color for the exterior to reflect youth and optimism. “The school is very much about transparency and accountability both on the students and the staff,” Ronan explains. “And I put glass walls within each classroom to get the effect, to bring the natural light from two directions into each classroom.” 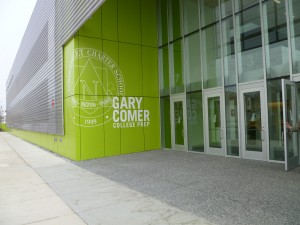 Ronan says that both schools send a message to their students that they will be protected within but also challenged. “We put the buildings right up on the street because we wanted to tell everyone that we are a part of the community,” Ronan says. “We’re here to help and we want the community to take ownership.”

At the end of the tour, Cook directs the driver to the construction site of the Poetry Foundation, one of Ronan’s current projects in Chicago’s River North neighborhood. The 22,000-square-foot building is expected to be open in June and Ronan says that it will have a mysterious quality that he wants people to be intrigued by. (Nancy Wolens)