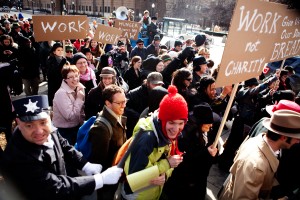 Striking laborers and plotting anarchists crowd Haymarket Square while policemen attempt to keep the peace. Suddenly, a pipe bomb explodes on the police line from an unknown source. Thus began the Haymarket Riot, which is still considered the day in which the Chicago Police Department lost the most officers it ever has in a single day. Consequently, this will also be what occurs on April 30 at 2pm with Paul Durica’s fourth reenactment, which he plans to “remind us that we all share in the legacy.” To do this, the Pocket Guide to Hell teamed up with the Illinois Labor History Society, the Version Arts Festival, Haymarket Pub & Brewery and the Fulton River District Association, enlisting the help of Chicago’s historian Tim Samuelson and musician Jon Langford, who will perform the song one of the convicted anarchists sang in his jail cell. Just like on his walking tours, Durica sets this reenactment at the actual site of the original Haymarket Riot—Randolph, Desplaines and Halsted—which demonstrates his goal of “reanimating spaces and connecting past and present.” Considering the current state of labor affairs in Midwestern states like Wisconsin, this connection should not be difficult to find. Volunteers will don period hats and badges, and everyone is encouraged to wear a costume. In fact, everyone will become a participant by acting either as a policeman, an anarchist, a laborer or a curious onlooker. For more information, visit pocketguidetohell.tumblr.com. (Elizabeth Kossnar)