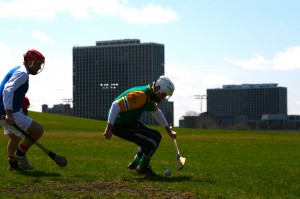 As he explains the ancient Gaelic sport of hurling, Colm Egan spits on his hands, rubbing them over the leather-covered cork ball, the size of a baseball, called a sliotar. Behind him, a few men in brightly colored jerseys unwrap long metal poles to set up as end posts on opposite sides of the field, setting down bags of full-coverage helmets and wooden bats with flat paddles at the end.

“It’s an honest game,” he says, explaining that the only thing that keeps players from truly hurting each other in the fast-paced sport, which involves heavy wooden bats called hurleys and no protective padding, is the players’ honor. “There’s not a lot of rules.”

Each Sunday until May 8, Chicago’s Gaelic Athletic Association (G.A.A.) will be holding informal hurling games for all skill levels, hoping to recruit more Chicagoans to the game before the league’s season starts up on May 15. They’ll provide the equipment, the team and, of course, the instruction.

Egan, 42, first picked up a hurley as a 5-year-old in County Tipperary, Ireland, where hurling is the national sport and the local G.A.A. forms the basis of almost all social activity. Last year’s entirely amateur national championships in Ireland attracted 84,000 spectators.

“I genuinely believe hurling is the single greatest sport in the world,” Egan says. “It’s the fastest field game in the world.”

And Greg Miller, public relations officer for the Chicago G.A.A. , says that it’s one of the fastest-growing sports in America. It is a sport built on tradition: most players have Irish parents or grandparents that played. But it has taken root in collegiate athletics with its wide appeal, combining parts of lacrosse, field hockey and even baseball with its own unique flair. 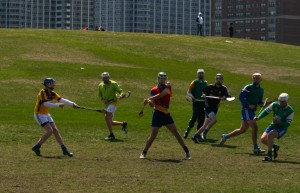 Like lacrosse, you can run with the ball balanced on the wide paddle-end of your hurley. Like field hockey, you can send the sliotar flying across the grass underfoot. But you can also grab the ball out of mid-air with your bare hand and bat it through the end posts with a hard thwack. There are few rules: you can’t hit anyone in the hand with your hurley, and you can only run three steps with the ball in your hand.

Other than that, it’s almost a free-for-all, with fifteen players on each team sprinting across the field for two half-hour periods. Mid-stride, they can pop the ball off the ground into their hand using their hurley, bouncing it between hand and stick as they run. To send the ball soaring over the goal posts (a score) garners one point; to roll it through the posts (a goal) three. Everything happens quickly, and with no protection other than a helmet, hurling can be kind of dangerous. Hurleys get cracked, helmets broken, shins bruised.

Today, most of the hurlers on the field are members of the Michael Cusack Hurling Club, an all-American team that plays at Gaelic Park on the South Side. Many have only been playing for a year or two, though they blend in well with lifelong players like Tom Sheehy, an Irish native who started playing when he was eight.

Sheehy now serves as the Games Development administrator for the North American G.A.A., and helped establish Hurling at the Lakefront last year.

“We were looking into promoting it in the city, to expose more people to the game,” he says of the event’s origins. “We hoped that people would pass by and take up the game.” It has been fairly successful, attracting six or seven new players to the league.

Of course, with the “fastest game on grass,” just picking up a hurley and giving the sliotar a whack isn’t quite as easy as it seems. “It’s tough to start off, no kidding with anybody.” Egan admits. But for a Sunday afternoon recreational game, the players are welcoming to even the most uncoordinated beginner.

“Everybody on that field only started a couple years ago. But when you get going, you really enjoy it.” (Shaunacy Ferro)

Hurling on the Lakefront, Montrose Harbor, Sundays noon-2pm until May 8. Free.