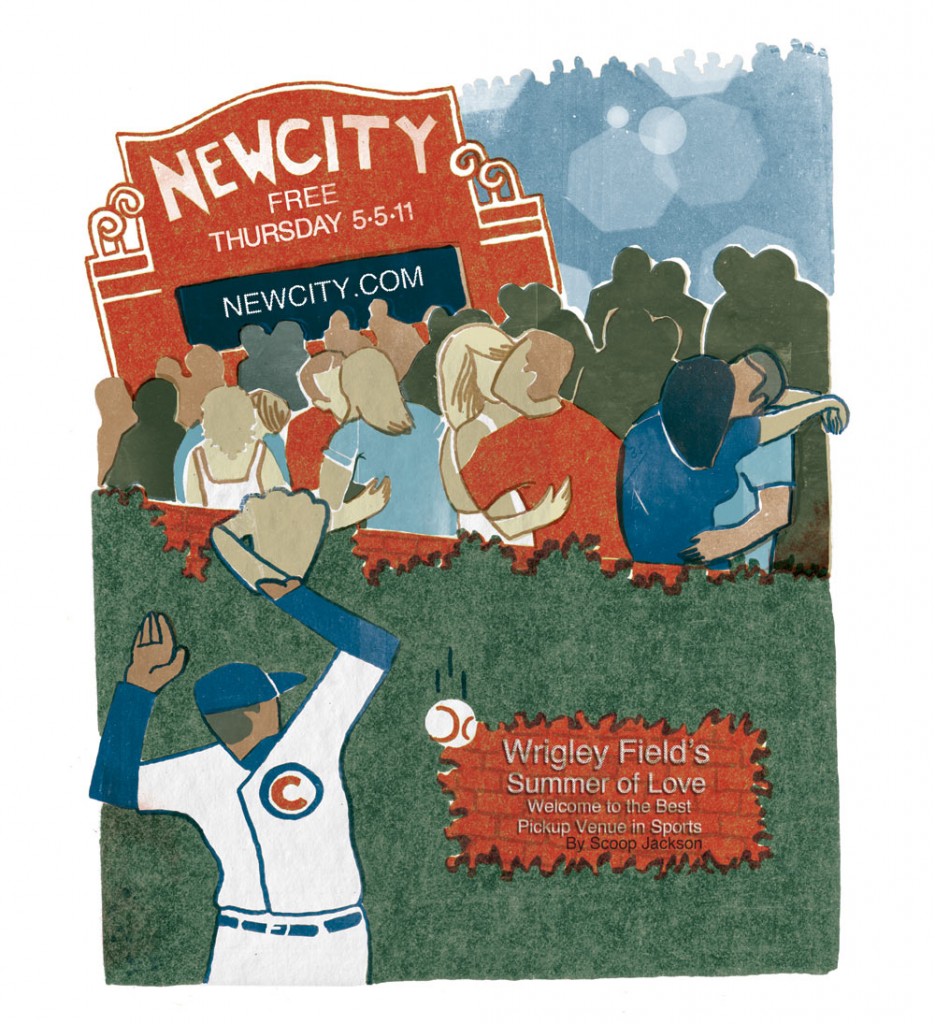 It’s Year 103 of the Drought and by the initial look of things, nothing’s changed. It’s cold, raining, damp, wind blowing… perfect baseball weather for opening day on the North Side. Baseball’s “other” worst team has come to visit, but the place is still packed.

For the fairweathered, non-diehard, quasi-apathetic Cubs fan, this is simply the best time of the year. It’s when Wrigley Field turns into the Playboy Mansion East. When some of the most beautiful women this side of South America­—or LA, depending on who’s asking and who’s telling the stories—migrate to one place for the next five months, treating the national pastime like Fast Times at Cooley High.

When everyone gets to enjoy Wrigley Field for the “second best” thing it is known for: Welcome to the best pickup venue in sports. Period.

“The women that come to Wrigley beat any club or bar you can go to in the city.”

The guy behind that comment asked to remain nameless. See, he’s an attractive young man who doesn’t want his employer to know that while he’s standing inside Wrigley every game selling Cubs gear for the organization, he’s also collecting phone numbers like Phil Jackson does rings.

“I can easily get ten numbers during a game,” he says. “And out of those ten, eight of the women are super hot.”

Game-in, game-out, guaranteed at least eighty-one times a year, the “talent” that makes it out to Wrigley trumps that at any other ballpark in the country. Fenway, Camden, new Yankee, Petco, Ebbets. Sorry. It’s like Sinead and Prince sang: Nothing compares.

“Give credit to WGN,” Cubs fans Gabe Clark and Shannon Newsome told me at one Cubs game. “’Cause they find ’em.”

Talk to guys who frequent Wrigley on the regular, and they will tell you that the games broadcast on Channel 9 are the equivalent of watching “Gossip Girl” or “The Hills” or anything on Telemundo. The attention and time paid to the crowd at the park by the cameramen and producers is a greater marketing tool than Lauren Conrad or Olivia Wilde. Thousands of women, cute women, partying women. It’s the greatest product placement in the history of sports.

True, writing something like this—to those who come out to Wrigley to support the Cubs (wink)—violates the unwritten, unspoken code of North Side ethics behind why Wrigley has become one of the most popular and beloved sports venues in the world. And why a team that has not won a World Series in more than a century was sold for $845 million. As much as going to Wrigley and attending games is all about baseball, for at least the last four decades we all know there’s something else at play: The singles in the stands are as big a draw to many as the singles on the field.

Even as a married man one would have to admit (as many married men who go to Wrigley will also attest), it is easy to get caught up in the atmosphere that surrounds and defines Cubs baseball. The main reason: the ratio. More than anything, this is what distances Wrigley from all other professional parks. In the process of doing this story alone, going to a random sample of about ten games, it’s easy to say the ratio of women-to-men is consistently fifty-fifty—same as a bar on Division Street.

Which for any professional sporting event is borderline preposterous. In a good way.

According to the Cubs media coordinator Danielle Holmes, “I would say (the ratio) is sixty percent/forty percent men-to-women. It increases when it is colder to maybe seventy-thirty in favor of men. Not as many women when it gets cold.”

“On any given game out here,” Cubs fan Colin O’Keefe says, “you will see hundreds of beautiful women. And the key is, if by the seventh inning the Cubs are losing, go straight to a bar.” According to O’Keefe and others who cosigned the strategy, that’s where “deals” get done, where “projects” get green-lit. Where the hook-ups are finalized. As one other guy said while standing outside of Sluggers, “[The women] come to the bars a lot of times before the game is over just to beat the post-game crowds.” And if the fellas are smart, he said, they get here early, too.

But it’s not just the guys who benefit from Wrigley. On the first day of a series against the Cardinals (always one of the biggest series of the year), there was an “only on South Beach” kind of sight on Sheffield Avenue: six women, all under 30, all dressed in skimpy red Cards gear. They tipped the “10” scale at 10.5. When I asked, they all said they go to ballparks all over the Midwest—Milwaukee, Cleveland, Cincinnati. But for meeting and mingling with members of the opposite sex, nothing comes close to Wrigley. One member of the group, Amanda, said every time she comes to see the Cards at Wrigley she leaves with “six or eight guy’s cell numbers.”

The smile on her face when she says this has Samantha Jones’ cryptic overtly undercover sexiness written all over it. I read into it, read into her. She’ll probably end up with fifteen numbers by the time “Take Me Out To the Ball Game” is sung.

Stephanie Mierau goes to at least twenty Cubs games a year and is a Blackhawks season-ticket holder. Hours before the 2010 season opener, while watching Waddle and Silvy broadcast live from Central, she offered a perspective on Wrigley from the double-X chromosome vantage point. “It depends on where you’re sitting,” she says of Wrigley being the pick-up spot. “The bleachers are a free-for-all. In the grandstand, the people watching is limited to whoever walks/sits in front of you. But the beer line is always a good spot to start up conversations.”

Justin Dodd came in from Indiana for this year’s opening weekend at Wrigley. He’d heard the stories. As the brother of a producer at ESPN, he knows that, in the business of baseball, selling the game is only part of the game.

“Wrigley isn’t the only ballpark with a party atmosphere,” he said, “but the women here seem to know they’re a part of something special.”

For two days he watched it on display.

“There’s something about that Cubs blue and red—the women at Wrigley know how to work their team colors like no other fan base.”

It’s the land of the beautiful people. Not all single, but many acting like they are. And because the Cubs are what is considered one of the four “national” teams in MLB (meaning their fan base spreads across the country and they are just as beloved outside of Chicago as they are in other parts of the country; the Yankees, the Dodgers and the Red Sox are considered the other three) and Wrigley is one of the greatest experiences in sports, people come from all over the world to watch the Cubs play. To many that is what separates the women and men in attendance at Wrigley from those at any other park. It’s not just the regulars that show up, it’s people who might only be there for the one-time experience ready to post stories on Facebook.

For them, Wrigley Field is Las Vegas.

And what goes on at Wrigley, stays at Wrigley. Talk to many of the people who have been frequenting the grounds for years and they’ll tell you stories. As one very (very!) cute bartender at Murphy’s admitted before a night game against the Braves last year emptied, “I don’t know if there is a lot of hooking up, but after almost every game there are always people here who had met that you’ll see making out.”

Personally, I know people (friends, me included) who have used Cubs games as a social playground. Before we one-by-one fell off the living-single market, getting cheap tickets to a Cubs game was always a “hella good” idea when we wanted to meet honeys. One of our best moves, back in the day, was when me and my man “D” used to sneak in a six-pack of bottled import beer that they weren’t selling inside Wrigley and find a couple of cute girls and tell them, “We got something better than Old Style.”

Former ESPN AM 1000 radio engineer Ernie Scatton puts it in visual perspective: “I went to a Cubs/Sox game a couple of years ago and what got me was the conga line going through the stands. It was thirty people deeeeep!” And nothing sets the table for picking up women/men better than… a drunk-infused conga line. Especially one in a crowd of 41,000 people.

At the ballpark during two different home stands, I asked several women and men if they’ve ever used Wrigley as a pick-up spot. Most responded with strong “Yeses” and stories that followed. Saying that because of the culture of fun that embodies the Wrigley experience, “hooking up” is a large part of what makes Wrigley legendary. Or as one guy put it, “It damn sure isn’t the Cubs.”

Across the street from Wrigley the man manning the door at Casey Moran’s has seen it all. In a bar that has nothing but female bartenders, it typifies what everyone—especially men—looks for in the Wrigley “experience.” When I ask him, “Does Wrigley Field live up to the rep of being the best pick-up spot in sports?” he gives me a look. Sorta like that “Did you really ask me that dumb-assed question?” look. That “You already know the answer to that” look.

As one ballpark vendor summed it up: “It’s good in the summertime out here… It’s like heaven.”

See also: How to Hit a Homerun: The best of Wrigleyville bars