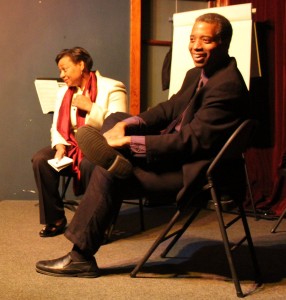 While Mayor Emanuel is still settling into his new office, political website Mayoral Tutorial (mayoraltutorial.com) will be celebrating its new angle: keeping an eye on him. The site, which provides research and commentary on public policy in Chicago, was set up as a way to keep track of the issues during the 2010 mayoral campaign, but has been static since the election.

Creator Don Washington, a political director and policy researcher, says it’s high time to update as Mayor Emanuel goes from just a Twitter handle to the real deal. “During the campaign people went to it in droves,” he says. “Folks said you should really keep it up, as a way to keep track of the Emanuel administration and the city council.”

The relaunch party at the Heartland Cafe on May 17 will include skits, songs, stand-up and speeches from artists, activists and musicians. While it might be a celebration, there will definitely be an educational component to the night.

Washington regularly sets up “agitational” town halls around the city as a way to shake up citizens and get them engaged in the political arena. He brings in speakers from unions, universities and the business world to discuss policy issues with ordinary people, often dispelling political rumors and misinformation.

“It’ll have a sense of celebration of the fact that now that the mayor’s going to be taking office, now comes the part that’s really important for us,” he says. “We should celebrate the fact that we live in a country where we can actually engage in politics, and we should get engaged in a way that’s substantive.”

Washington wants to set up a direct way for voters to access policy research that they might not be aware of, essentially providing them with all of the benefits of opposition research presented in a friendly, easy to understand way.

“This kind of information doesn’t usually come to ordinary people—we usually don’t get it until much later, after it’s been massaged a lot by somebody else,” Washington says. He hopes that by giving people access to that information, they will be able to make up their own minds on the issues, rather than being influenced by powerful political figures. “You can never have too much information in a democratic society,” Washington says. “You just can’t.” (Shaunacy Ferro)