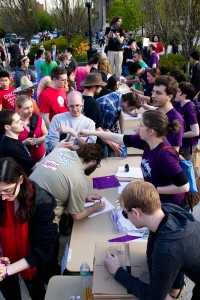 One young college student, balanced on the shoulders of another, wobbles dangerously while the lower one cringes. “Low five!” he screams, and claps hands with the scavenger-hunt judge beside me, successfully fulfilling said item on the list of required finds or feats. Over the next hour, as people rush around the quads trying to figure out “Nearest what classroom building you can find a Ferrari?” and “the theorem illustrated on Eckhart” before time runs out, this happens thirty times. Thirty.

Students from the University of Chicago are attempting to break the official Guinness World Record for the largest scavenger hunt, one currently held by 212 children from St. Anthony’s Catholic School in Ontario.

This record-breaking attempt is happening just as the twenty-fifth annual UChicago Scav Hunt, one of the school’s zaniest and talked-about traditions, is underway. The entire event is a four-day-long frenzy to collect almost 300 items, including “The most evil thing you can build using only the parts and materials included with one IKEA item” and “brownies baked using only the power of the sun.” Captivated students abandon their student groups, midterms and souls to fulfill hundreds of insane challenges, putting their intellects to use in ways that seem both geeky and totally, unashamedly cool. So today, in the warm sun of a late Friday afternoon, they’re trying to break the Guinness World Record, an effort that is just one small part of the larger Scav Hunt.

“It’s crazy,” says one student, a first-year, who is sitting beside her team and planning their attack, “I want to break a world record! I want to buy the ‘Guinness Book of World Records’ and say, ‘Hey, I did that.’”

At the finishing point—after the hour-long hunt is over—judges collect the answer sheets from waiting teams. “I think this went very well. I think we have around one thousand people,” says Daniel Citron, who organized the event—more than doubling the standing record set by the kids in Canada. (The official tally is 924.) No wonder he’s grinning. And despite the fact that it will take a little over a month for the record to be officially certified, UChicagoans can draw strength from the fact that while they wait, they still have the grander Scav Hunt to enjoy.

“Scav is, as always, a mad rush of insanity! But the imaginative kind of insanity,” say a couple of students at the finish point, on their way to collect the complimentary ice cream awarded to participants, and bask in the glory of a job well done. How did it feel to break the record? I ask them, as they stand with their arms around each other. “Easy.” (Lauren Kelly-Jones)