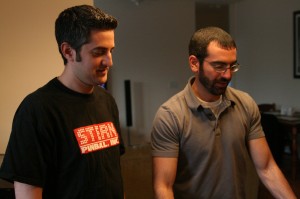 They’re a dying breed: lurking in bowling alleys and bars, movie theaters and Chuck E. Cheese’s. Immortalized by The Who. Forgotten by almost everyone else.

They are pinball wizards.

Though it’s not exactly something they print on the brochures, Chicago is the birthplace and the capital of pinball and home to some of the world’s best players—including two of the sixty-four competitors at the World Pinball Championships in Sweden May 27-May 29.

Ranked at number 4 and 7 in the world, Zach and Josh Sharpe are something of legacies in the pinball world. Their father, Roger Sharpe, a game designer, testified before a jury in 1976 that pinball was a game of skill, not gambling, paving the way to its legalization. (From the 1940s to 1970s, the game was illegal in many states because machines paid out money, much like slot machines.)

A nook of Zach’s living room is devoted to pinball: there are three games, and a shelf of trophies covers one wall from floor to ceiling. The younger Sharpes each have a copy of a game their father designed, called Cyclops. They point to the artwork: two Cyclops holding a woman, with a mustachioed man on a horse coming to her rescue.

Josh, 31, and Zach, 29, are President and Vice President of the International Flipper Pinball Association, which puts on the world championships. 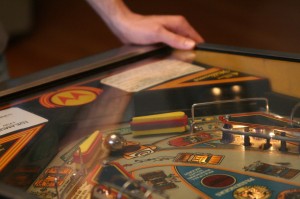 The tournament stretches over three days, with players competing for up to eleven hours a day. One of the toughest challenges for competitive pinball players is just standing for that amount of time without losing focus.

“One small mental lapse and the tournament can be over,” Zach says. But come day three, the longer you play, the better. “If you miss your flight, that means you’re doing very well.”

The brothers played their first tournament in 1993, after begging their father to allow them. He was worried it might start a rivalry. But although the competition is fierce, it’s not the sort of game where fights are common.

The sheer variety of games presents another challenge to the world of competitive pinball games. Each game has a different set of rules and characters, and it’s hard to accumulate a lot of points without knowing the ins and outs of them.

“To remember everything you have to do on this one game, then multiply that by fifty…we make a lot of phone calls to our dad, especially when we get to the older games,” Josh says. But “there’s a lot of learning on the fly.”

There is now only one company that manufactures new pinball machines, Stern Pinball, Inc., so there are only a few new games to learn each year. But that presents its own set of complications.

“It’s tough too,” Zach says, “because the Stern games are so sophisticated now with moving parts and all the different rules.”

Despite having machines in their homes, though, they say they rarely practice outside of league tournaments. The games they play at home are even harder to use in any other setting, since they might be a different height or differently adjusted. But now that Stern comes out with mostly pop-culture-based games, they do have to at least familiarize themselves with the story.

“Their newest game is TRON, and I just watched “TRON: Legacy” so I would have some inkling of what’s going on,” Josh says.

Zach, who works at a marketing agency, and Josh, an accountant for a coin-operated game company, say they rarely have trouble getting time off from work to travel to tournaments around the U.S. or to the world championships.

“There’s something special about being good at something so random, people supporting your passion,” Josh says.

Rather, it’s only helped them professionally.

“It definitely helps on the resume, to be able to say you’re a world-ranked pinball player,” Zach says. “I’ve gotten calls where they say ‘you’re not qualified for the job, but I really just wanted to talk to you.’” (Shaunacy Ferro)