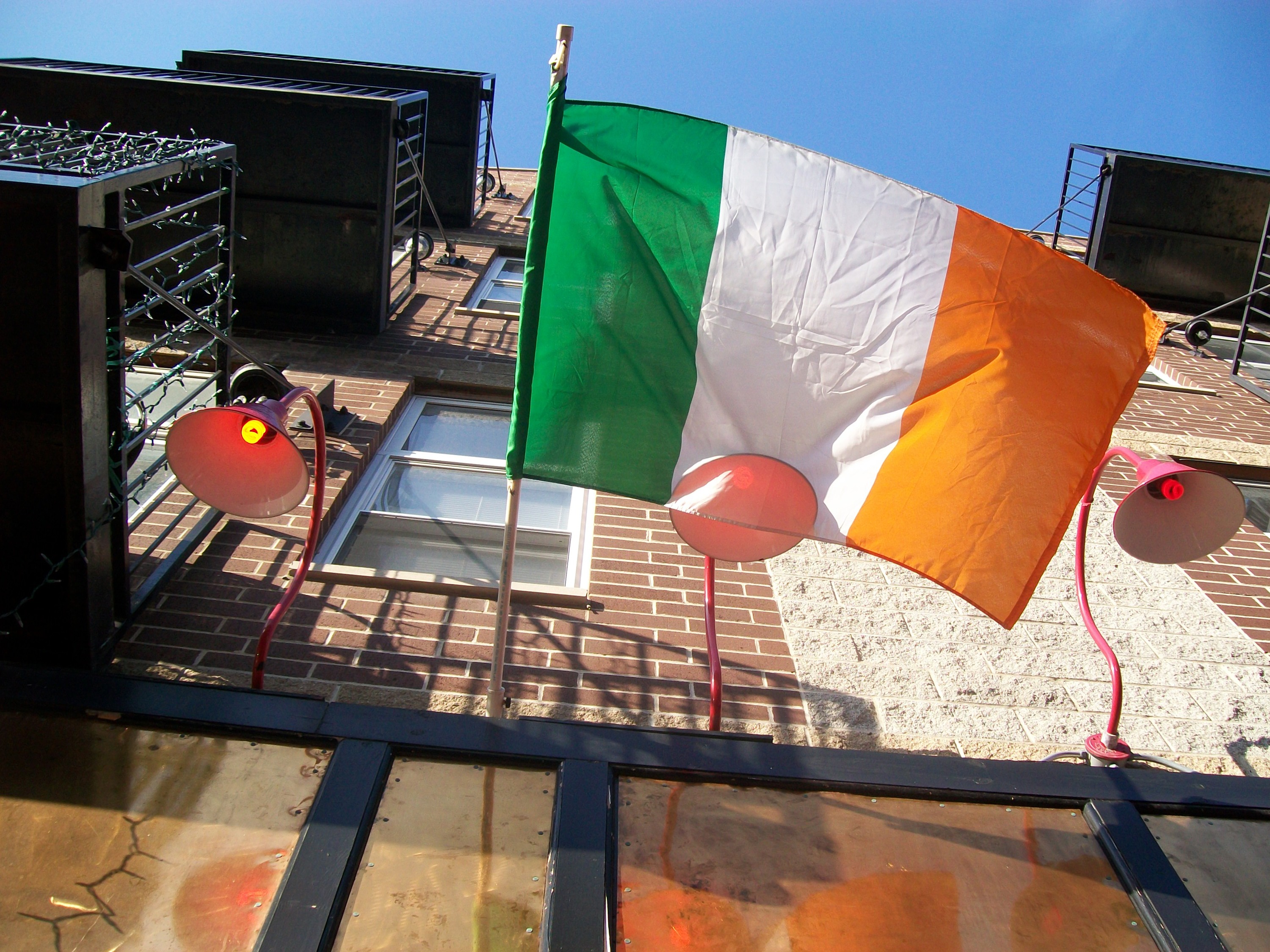 It’s the end of May, and the invasion has already begun.

Every summer, an influx of Irish flock to Chicago. Like migratory birds, 1400 to 1500 Irish students descend upon the city with J-1 visas in hand. The J-1 is a three-month work visa for students between college semesters. Usually 19-21 years old, they seek out seasonal work—furniture removal, scooping ice cream at Navy Pier, slewing drinks in the beer gardens of an Irish pub. For the span of the summer, these “J-1-ers” work and party hard, sleep by the dozens on air mattresses, then return home.

“J-1-ers don’t tend to travel in ones or twos. They come in twelves,” says Paul Dowling, a former J-1-er who now serves as the Director of Social Services at Chicago Irish Immigrant Support.

Of the thousands who come, anywhere from 550 to 700 make their way to Armitage Hardware, its nondescript windows lined with Girl Scout cookies, tiki torches and barbecue grills for sale. They come seeking one man: Dan O’Donnell.

O’Donnell sits at his paper-strewn desk in the cellar of the hardware store. On the phone, a girl from Sligo asks, “Am I talking to Mr. O’Donnell? He’s a legend over here in Ireland.”

O’Donnell has owned Armitage Hardware since 1967. One bright June day in 1998, he looked across the street; there, on the curb of Bissell and Armitage, a dozen despondent Irish students sat with knapsacks on knees.

“They were really upset.” The problem, O’Donnell says, is that many of these students arrange their three-month sojourns through “youth travel specialist” companies like USIT Ireland or Sayit Travel. The company arranges the round-trip airline ticket, insurance, visa, homeland security card, and social security number—all for the hefty price of 1,400 euros ($1,900+ US dollars). However, once the students step off the plane at O’Hare Airport—many of them rural teenagers who are away from home for the first time in a foreign city—they’re on their own to find housing and jobs.

That’s where O’Donnell steps in. “When the kids leave Chicago, I want that they will have the best experience they can.” He helps them with everything that USIT and Sayit does not: finding apartments and work, getting CTA passes and phones, arranging for use of the internet facilities at DePaul University, directing them to the Social Security office, providing maps, purchasing household items on the cheap at Target… anything they may need to get set up for the summer. 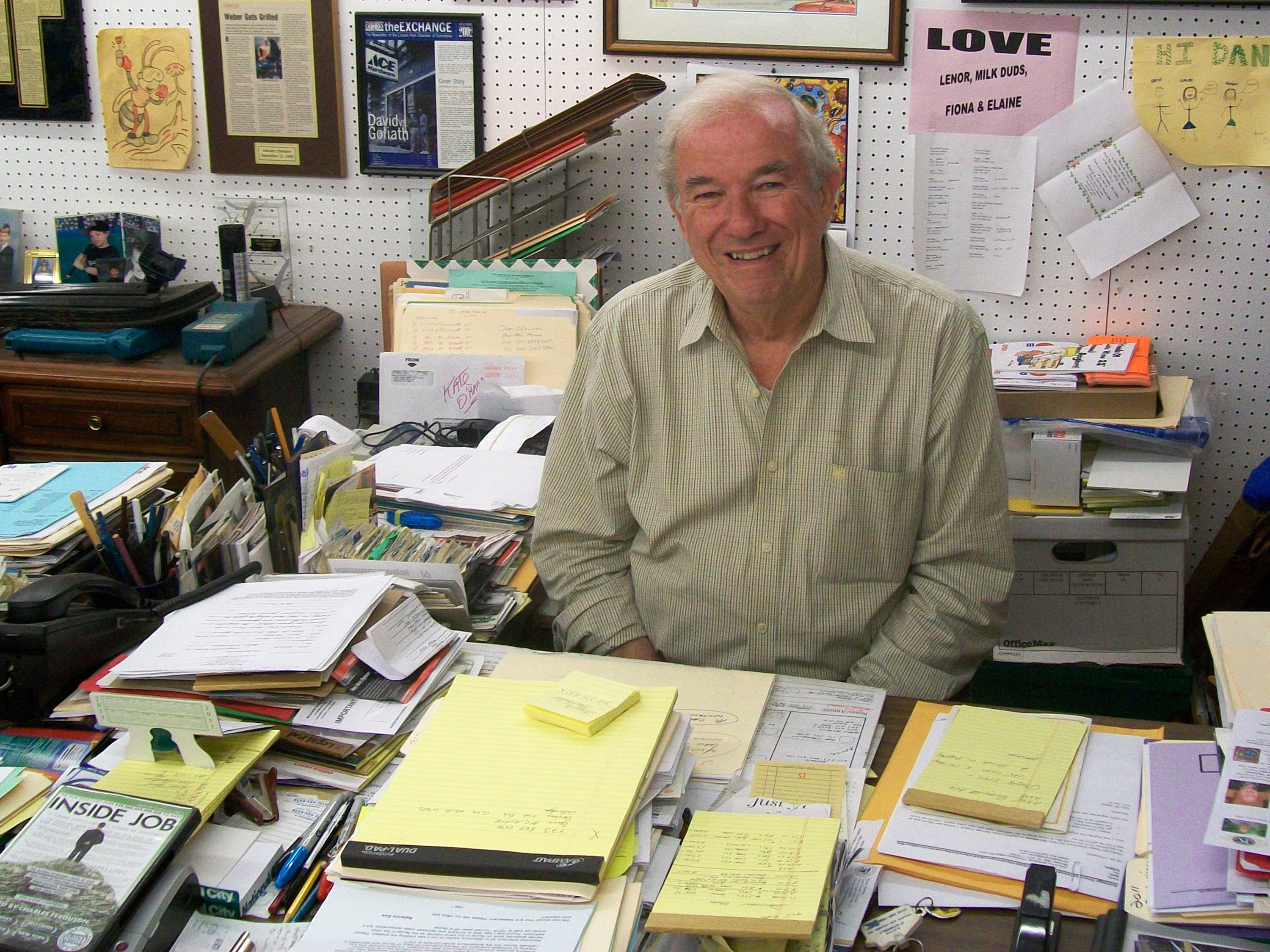 Dan O’Donnell: The “legend” himself, sitting in front of all his J-1 paperwork in the cellar of Armitage Hardware

“They’re here to learn about the culture and the city, and be away from home for the first time. But truly,” says O’Donnell, “It’s party, party, party. They sow their wild oats. They drink more than they’ve ever drunk in their whole lives before. They do everything that a kid is busting out to do.”

Brendan Murphy, 20, of Cork, says “doing a J-1” is a tradition in Ireland. “[In America], in the one country, everything’s so different. But wherever you go in Ireland, everything’s the same. Same people. Same climate. We kind of have to leave.”

“Chicago seems to be a big destination this year,” adds Katie Murphy (unrelated), 20, of Dublin. The J-1-ers decide on destinations through word of mouth and social-networking sites. Right now, Chicago is trending. “Every year there’s different places that are popular… like last year was Boston. There will be an onslaught to Chicago this year.”

Why Chicago? Brendan and Katie say it’s a matter of cost… and size. “Everything’s huge, like nothing I’ve ever seen before,” says Katie. “The lake… I can’t believe it’s a lake! It’s roughly the same size and length of Ireland, and close enough to the same width, so it’s hard to get your head around.”

The J-1 migration is as familiar as the changing of the seasons to the Chicagoans who live in the Irish’s favored neighborhoods: Wrigleyville, Lakeview, Lincoln Park, Bucktown and Wicker Park. Chicago resident Lindsay Leonidas recalls the J-1-ers who rented the apartment below hers at the corner of Halsted and Lill. “It was only a two bedroom with a den. It was a very small apartment. I think in the beginning there were seven, but by the very end of the summer, the peak number was twenty-one. They were sleeping in shifts on air mattresses on the floor.” 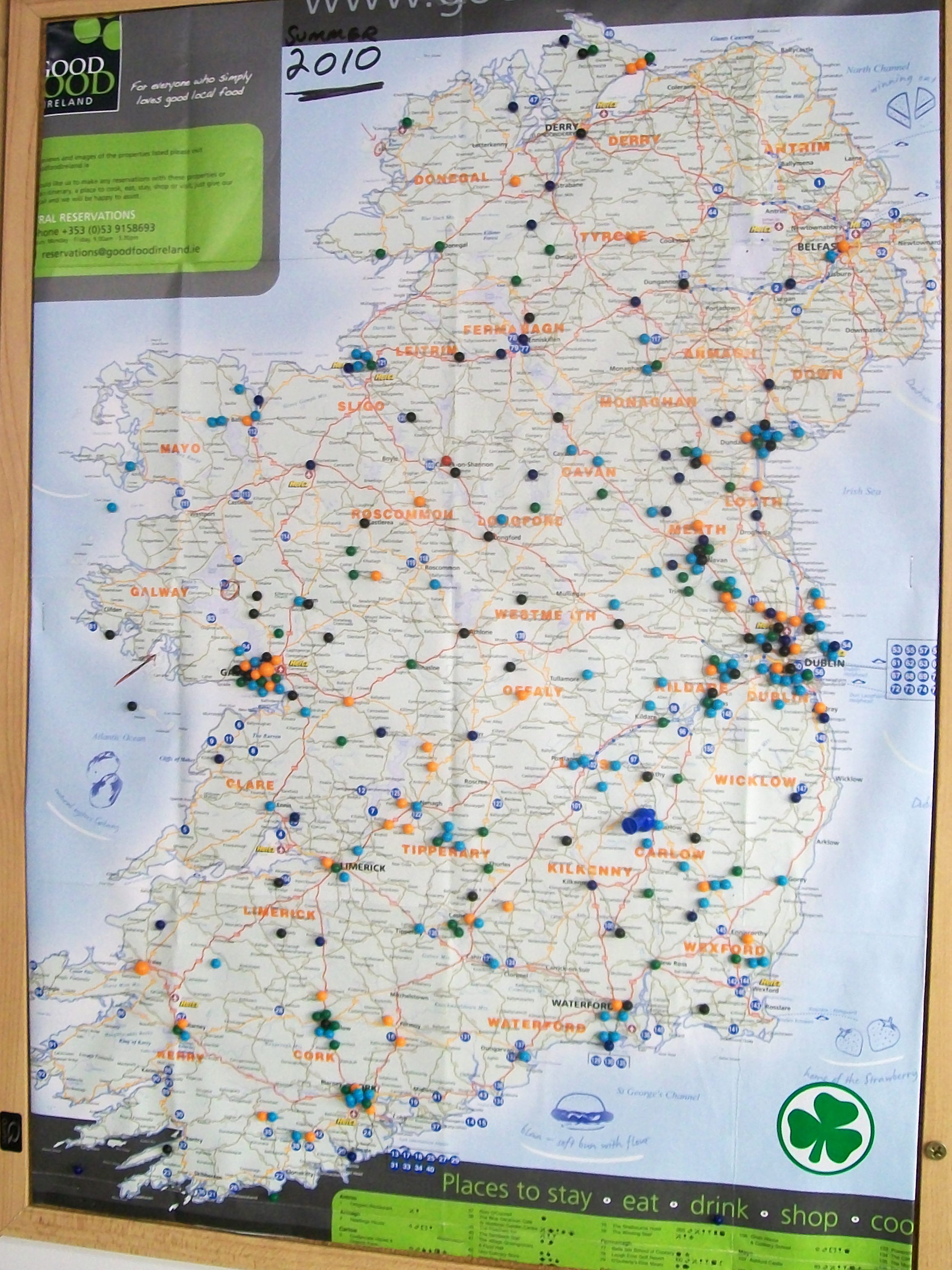 This is the map of Ireland in the cellar of Armitage Hardware. The pins mark all the places that J1-ers hailed from last year.

Alec Thorsen is a floor manager at Kincade’s Bar and Grill, just a block down the road from Armitage Hardware. “Wednesdays are dollar bottle nights. On a Wednesday night [in the summer], if there are 400 people here, probably 150 are Irish,” he says.

Leonidas says her Irish neighbors threw massive parties and trashed the apartment when they left it, the kind of behavior that has led to an overall bad reputation with landlords. “It can be hard to find accommodations,” says Dowling, “Unfortunately, it’s the same with everything: a couple of bad apples spoil the barrel.”

For Katie and Brendan, it was a struggle finding any landlord who was willing to rent to them. They became so desperate, they had to arrange a three-month lease without informing the landlord they were Irish. “We’re just not used to being the discriminated one, just ’cause we’re Irish from Ireland,” says Brendan.

O’Donnell agrees that the J-1-ers have a bad reputation, one that is spurred on by a few students who take their summer too far. “Most of them are pretty good, but a few aren’t. I only had one last year: 950 Fletcher…” his voice trails off and his head falls into his hands. “My God, it was a nightmare.”

The address in question was actually two buildings scheduled to be gutted in September. Within two weeks, forty-five players from two opposing Irish football teams—one from Donegal and the other from Kerry—were living there. “These kids are arch rivals on the football field, and you get them drunk, and it creates monster problems,” recalls O’Donnell. Wild parties with hundreds of Irish lasted all night, beer cans littered up and down the street—and all of it taking place next to the brand new million-dollar houses on Fletcher.

“So I went over there twice, and I raised all kinds of hell,” says O’Donnell.

Other issues the J-1-ers encounter include robberies, lost passports (fifty last year), late paychecks and unscrupulous landlords. There is also the threat of medical emergencies. Last year, a J-1 girl fell down the stairs after a party and broke her jaw in three places. At Northwestern Hospital, O’Donnell has a few doctor friends who are willing to treat the J-1-ers free-of-charge. “She was wired for a month, but she was OK, and she stayed. She didn’t go home. She was having too much fun here.”

Other accidents are far more serious. On July 29, 2009, Keith O’Reilly was celebrating his twenty-second birthday with friends at North Avenue Beach when he dove into six inches of water. He broke his spine in seven places, and died later at Northwestern Hospital. It took two days to contact O’Reilly’s family; as a result, O’Donnell now has his J-1-ers provide him with emergency contact information. He also provides support during times of tragedy, like paying $1,000 for emergency bereavement plane tickets.

Luckily, events like these are few and far between, so O’Donnell can focus on ensuring that the J-1-ers just have a good time in Chicago. “As long as you have your rent paid and a little bit of money for food, you can enjoy tremendous things.” J-1-ers can work at Lollapalooza and see 200 bands for free; they can do the same at the Taste of Chicago. O’Donnell treats them to lunches, or orders them an Eiffel Tower at Margie’s. He takes them out on his thirty-six-foot boat to watch the Navy Pier fireworks over the lake. Plus, the people of Chicago are incredibly friendly. “Americans love Irish people,” says Katie. “Everybody seems to like us to talk, like say ‘grand’ and what else we say.”

O’Donnell estimates he spent $6,000 on J-1-ers last summer, but insists it’s worth it, just knowing he’s giving the kids a great experience while they’re far from home.

“Dan O’Donnell… he’s a thing of legacy,” says Dowling, himself a native of Gorey in County Wexford. “He’s so well known in Ireland… the President of Ireland got in touch with Dan O’Donnell. He just gives very practical help to the J-1-ers, and he does it all voluntarily. Dan has turned it into a fine art.”

O’Donnell laughs, “Besides, I am getting paid! We’re selling air mattresses upstairs in the hardware store…$15 each. So we’re making something on the deal.”

[…] O’Donnell, father of Wicker Park’s Pint Pub owner Kevin O’Donnell, was featured in this New City story by Laura Hawbawker about a privately sponsored program offering 3-months of city life to near or recent graduates […]

thinkin about goin to chigago for the summer under a student visa.. would be greatfull if i could get some help in looking for work and a place to stay.. fair play to the odonnells they sound like ledgends for helping out irish abroad..!

Wow amazing story and one awesome extra ordinary man.As I was reading this article I got different reactions.Awed for the amount of Irish going to Chicago every summer ,happy because of there’s a certain man helping really those in need,teary-eyed because I was really touched by what Mr.O’Donnell is doing without even expecting anything in return and shocked about some Irish on how they spend their vacation and felt sad to those people who got hurt and died.But all in all I was glad to know that there’s a Mr.O’Donell that’s assisting them in any way they need to.Making their… Read more »