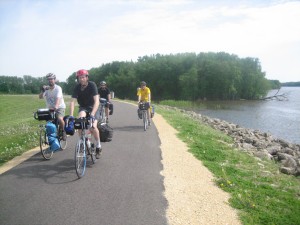 If you’re a car-free Chicagoan, you don’t have to hit up Hertz to take a kick-ass road trip this summer. Here in the nation’s railroad hub, bicycle plus train is a powerful combo, not just for getting around the metro area but the entire Midwest.

Case in point is the beer-soaked bike camping trip my buddies and I took earlier this month along the Mississippi River, across Wisconsin and back using Amtrak and Metra. It was our annual Men’s Trip, a chance for the married guys to take a break from family obligations, and since most of the guys are serious beer snobs we planned our itinerary around brewpub visits. Late spring wind and rain made this tour a bit of a death march for us, but if you’d like to try the route (tinyurl.com/brewpubride) it’d be a blast to ride in July sunshine.

On a Wednesday evening we loaded our touring bikes with tents and sleeping bags and hauled them aboard Amtrak’s Carl Sandburg line to Kewanee, Illinois, near the shoulder of the state. Soon we’re flying west across the prairie past dozens of white modern windmills tinted pink by the setting sun.

When we pull into Kewanee, a sign says we’re in the “Hog Capital of the World,” so down the street at the Pioneer Club I tackle a breaded pork tenderloin horseshoe sandwich. The horseshoe is a downstate Illinois specialty often called “a heart attack on a plate”—white bread, fries and a protein, drowned in cheese sauce.

We camp up the road at a park donated to the city by Fred Francis, an oddball inventor, artist, poet and nudist. In the morning I tour Woodland Palace, the futuristic dream home Francis built on the site in 1890, featuring wind-powered heating and cooling systems, automatic doors and many other clever gadgets. I’m most excited to see his bicycle, with a seat installed over the front wheel so he could carry his wife Jeanne to church.

Soon the six of us are pedaling northwest toward the Mississippi in gorgeous weather with the wind at our backs. We reach the Big River near Fulton, a town whose Netherlands heritage is advertised by a big old-fashioned windmill by the levee, surrounded by tulips. Continuing along the Great River Trail we get awesome views of the Mississippi, three or four miles wide in places, and pass the Thomson Correctional Center, an unused prison where Obama proposed housing prisoners from Guantanamo.

We stop for the night in Savanna at Poopy’s, a complex offering everything a Harley rider might want: motorcycle parts and accessories, tattoo parlor, campground and a pub with a scatologically-themed menu. I shudder at the thought of a huge, hairy biker scarfing down a one-pound burger called the Big Poop, but the menu promises, “A hot cup of joe will get this bad boy sliding south.” 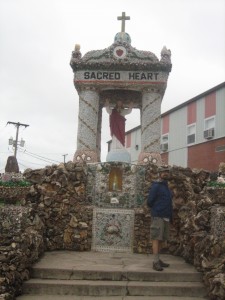 Conditions are a hell of a lot tougher the next day as we grind up steep river bluffs and then zoom down them on the way to Galena under leaden skies. This pretty little city, once home to Ulysses S. Grant, features dozens of perfectly preserved old buildings and lots of boutiques and knickknack shops. At Galena Brewing Company we fortify ourselves against the chilly weather with hearty grub and glasses of Uly’s Dark oatmeal stout.

Soon we’re crossing the “Cheddar Curtain” into Wisconsin, tackling more big hills in a light rain. In the small town of Dickeyville we check out the Grotto, an epic work of outsider art next to Holy Ghost Parish church. Between 1925-1930 Father Matthias Wernerus built several massive shrines to God and America out of stone and mortar, studded with brightly colored glass, semi-precious stones, fossils, seashells, gearshift knobs and more. There are multiple statues of Jesus and the saints, plus Columbus, Washington and Honest Abe.

The stretch from Dickeyville to Potosi is the most beautiful leg of the journey. We roll along curving country roads over lush green hills with breathtaking river views—it’s like something out of “Lord of the Rings.” Our dinner stop is the Potosi Brewery, founded in 1852, closed in 1972 and recently reopened by a nonprofit foundation—all proceeds go to charity. The beautifully restored pub serves tasty brews and classic Wisconsin fare like pan-fried walleye and beer-boiled brats. The National Brewery Museum is onsite, with fascinating exhibits of “breweriana.”

We camp at nearby Grant River Recreation Area and get poured on that night, but my tiny one-man tent keeps me snug and dry. The next day we turn east, enduring cold rain, a stiff crosswind from the north and nonstop roller-coaster hills, except for a stretch along the flat-but-rugged Cheese Country Trail. Our goal is New Glarus, a charming Swiss-themed town that’s home to the New Glarus Brewing Company which refuses to sell its delicious beer outside of Wisconsin.

But by late afternoon we’re soaked and exhausted, so we decide to cut our mileage and detour to Monroe, another Swiss town that’s home to the Huber Brewing Company, which makes house beers for Chicago’s Berghoff Cafe and Billy Goat Tavern. Rather than crawl into wet tents, we happily check into a Super 8, order pizzas and ease into the Jacuzzi in our bike shorts, sipping the New Glarus’ Fat Squirrel Ale we bought nearby. 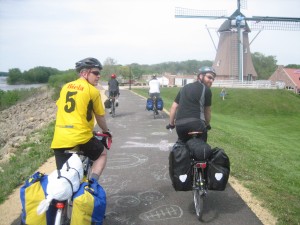 In the morning, the north wind continues to buffet us as we pedal towards Harvard, Illinois, where we’ll catch Metra home. As usual, I’m bringing up the rear and I get separated from the group as we navigate the Beloit-Rockford metro area. After stopping for a serene picnic beside the Rock River, I take my time pedaling the last twenty-five miles, still battling the crosswind. A few miles from Harvard I realize that if I hustle I might be able to catch up with my buddies onboard the next train to Chicago. I shift into high gear, stand up in my pedals and sprint. I surprise myself by zooming into the station, drenched in sweat, with seconds left to drag my bike onboard.

Lo and behold, my friends aren’t on the train. I later find out they took a wrong turn down a gravel road and got to Harvard a half hour after me. Nevertheless, I slump down onto a seat, exhausted but happy. Grateful for Metra’s liberal alcohol policy, I pull a warm Fat Squirrel out of my saddlebag and take a satisfying swig.

Donate to Newcity today and your contribution will be tripled!
+