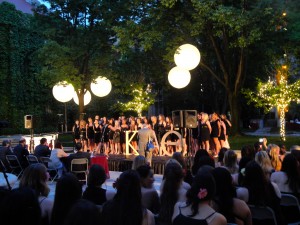 Lanterns have been strung from the trees around Hutchinson Courtyard in the University of Chicago quads, speckling the area with light on a dark and warm summer night. This is the Saturday of Alumni Weekend, so the campus is already buzzing with tradition and remembrance, but the chairs of the courtyard tonight are specifically (but not exclusively) filled with alumni who were in the Greek system.

The Interfraternity Sing is an annual University of Chicago tradition that harks back to June 1911, when it began as a way to replace the less popular Senior Sing. Now, it’s a beloved and successful Panhellenic singing competition. In 1916, twenty fraternities marched into Hutchinson Courtyard, but by 1922 there were thirty fraternities and more than 18,000 participants. Today, the IF Sing draws over 1,000 and is 100 years old—so it’s more than ready to have a birthday party.

“We are just really excited for Sing in general this year,” says Jessica Sheft-Ason, Kappa Alpha Theta’s public relations VP. “I think because it is the 100th anniversary, many of the girls in our sorority are looking forward to it even more than usual.”

Sorority members wear black dresses, each specific chapter defined by their accessory, and fraternity brothers wear suitably dressy blazers and ties. But four Delta Upsilon alumni are sure that by the end of the night, one brother won’t be so well-dressed. “We run away and throw someone into Botany Pond as soon as we’re done singing,” he reveals as the festivities get going. “They either have to build a boat, or get thrown in the pond. The current student is a senior, and he has to claim the island in the middle of the pond for DU, name the next commodore [next year’s pond-dweller], and then everyone runs full speed back to the house or he gets to hug them.” The other alumni laugh. “D is for Delta, U for Upsilon,” they start singing, “DU Delta U, Delta Upsilon.”

The night features performances by every recognized sorority and fraternity on campus, who compete for the Best Overall, Spirit, Quantity and Quality Cups. By the end of the night, these go to Kappa Alpha Theta, Delta Kappa Epsilon and Phi Gamma Delta (tie), Alpha Omicron Pi and Delta Gamma, respectively. In addition, student singing groups “Ransom Notes,” “Men in Drag” and “Voices in Your Head” perform. Beneath the lights, the strength and the breadth of Greek Life on campus feels much larger than the ten percent of the student body that it includes. One of the most cherished parts of IF Sing is the opportunity it provides for current and past students to reconnect with alumni. 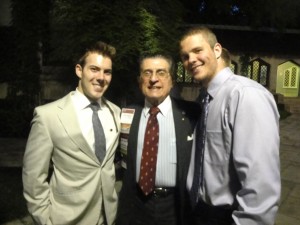 Bernie DelGiorno and his Fiji brothers

For Bernie DelGiorno today marks another special anniversary: it’s his sixtieth IF Sing. As an alumnus of Phi Gamma Delta, he’s been one of the many cornerstones of house life for Fiji brothers, as they’re known, playing as important a role for them as he has for the university as a whole. He regularly makes generous financial contributions to the College and to the Booth School of Business, and directs much support towards improving the athletic facilities on campus, while an entire house in the South Campus Residence Hall bears his name. But DelGiorno always makes time to attend the Sing and serenade the waiting crowds, ever since his first in 1951. “It’s a gathering point for brothers of many generations and decades,” he says as the girls of AOPi sing. “It’s a chance to try and present ourselves very creatively and musically on the university campus, to do a good job and have fun.”

“I’ve never left the university area,” explains DelGiorno, “so it’s easy to go to athletic competitions and lectures and parties, and I do a lot of fundraising and I’m involved in a lot of development work for the university. This is the center of the universe, the greatest campus in the country.” As he says this, in the distance, I can hear the splash of someone happily being thrown into Botany Pond. (Lauren Kelly-Jones)