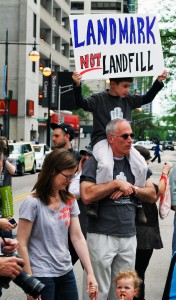 Architecture advocacy groups Landmarks Illinois and Preservation Chicago have spent more than a year trying to save the old Prentice Women’s Hospital in Streeterville. On Wednesday, they made it a national issue.

The National Trust for Historic Preservation named the now nearly vacant building to its list of America’s 11 Most Endangered Historic Places during a press conference and rally held just outside the building.

Both groups continue to fight for granting the building landmark status. In April, Northwestern University, the building’s longtime owner, agreed to table its demolition plans for sixty days while Chicago considers its possible status. But the Landmarks Commission deferred its vote on June 2, and now the advocates remain uncertain as to whether it will be even on the agenda for the July 7 meeting. In what he feels is a closing window of opportunity, Preservation Chicago director Jonathan Fine says the city needs to recognize the need to preserve its cultural legacy that extends inward from its most visible areas.

“Chicago, as great of a city as it is, sometimes can’t look beyond its own navel when it comes to architecture,” he says. “Two years ago we lost eight of the nine Gropius Buildings on the Michael Reese Hospital campus, and in exchange we now have a sea of taxpayer-funded mud down there. We are on the verge of making the same mistake twice.

“We can’t just save the buildings visible from Lake Shore Drive.” 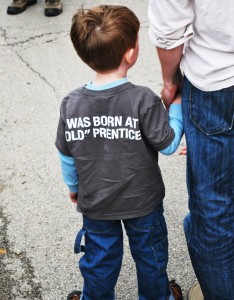 The old Prentice Women’s Hospital in Streeterville is one of famed Chicago architect Bertrand Goldberg’s most striking contributions to the city skyline. Yet, the now-thirty-six-year-old clover-shaped building, long a part of Northwestern’s Feinberg School of Medicine, has been mostly empty since 2007 when the school opened a new women’s hospital. The university has announced plans to raze the building in September to make room for a state-of-the-art research facility it feels necessary to become a leading academic medical center.

A study of the building by Landmarks Illinois determined its reusability as a residential and office space. However, Northwestern released a response in late May saying it does not need such space, and it does not meet the standards necessary for the research facility it envisions, mainly because the floors currently do not have adequate height, attempting to fit it for such a facility would drastically reduce efficiency. Still, the two advocacy groups maintain the buildings architectural merit and connection to Chicago’s history.

“Show me another building in the United States, or anywhere, where concrete defies gravity,” Fine says. “It is a forty-five-foot, cantilevered hospital floor. That alone, architecturally and engineering-wise, is a masterstroke. It is vitally important we put the breaks on demolition.”

Both Landmarks Illinois and Chicago Preservation hope Prentice’s place on the National Trust for Historic Preservation’s list can bring the national attention needed to finally secure the building’s place in the Chicago Skyline. With enough spotlight on the issue, Fine believes this should become a major opportunity for the Emanuel administration to choose which direction the city’s cultural legacy is going to take. (Alex Baumgardner)