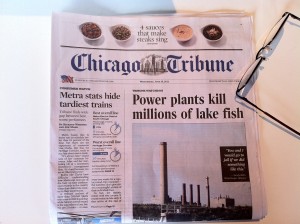 It sure did feel heftier, as promised, but that sixty-two-page property-tax-sales insert added much of the weight to the ninety pages of news sections. Coincidental timing or?

The redesign is handsome and telegraphs “serious newspaper” instead of “almost like television, but…” or “almost like the Web, but…” or “almost like the RedEye but…”. The black-and-white skyline in the nameplate, a faux engraving, evokes the publication’s longevity while hinting that it, too, is a landmark like the skyscrapers. The typeface change, from Nimrod (an unfortunate name given the paper’s recent leadership) to Mercury Text is subtle but seems ever-so-slightly friendlier to the eyes of an aging population.

The absence of an ad on page one? Thank you. This page is your ad, for your product, Mr. Tribune.

The serious tenor and design of page one is partially offset by the colorful image of steak sauces above the nameplate, which reassure readers that, “Yes, we’re  more serious now, but there’s still fun content within, where it belongs.” This is probably the most carefully considered page one in years, if not decades: Investigative story to show how serious we are, check. Consumerist Metra study to remind suburbanites that we really really love them best, check. A story about moms and another about the declining life expectancy of women to appeal to the challenging female newspaper reader, check.

Who the heck is this James Janega pontificating about the redesign on page two? The editor? No. The publisher? No. A Google search reveals he is the “TribNation manager,”  whatever that is. Shades of wishful imperialism in the Colonel McCormick mold? (The publisher and editor did address the redesign helpfully in a pull-away wrap around section one. The Janega thing seemed superfluous and kind of weird. He does say, sort of, that the Trib even enlisted the Big Guy in the Sky for this one. Talk about a Hail Mary!)

Who really thinks it’s a good idea to still put columnists’ photos next to their words?  Sorry guys, but the reality of your mug is always a letdown versus the fantasy your words might conjure. And many of you actually look better in person than these oddly inauthentic photos indicate.

I really appreciate the new content. But why flag each new page and force me to decide, “Ah, this is the story that all the hoopla is about. Is it really worth it?” You’ve told us about the new pages, but keep the redesign notes in the wrap and let me just read the paper. That being said, I dug the Valerie Percy murder rehashing. That unsolved mystery, with its elements of wealth and national power, doesn’t seem to get old. The other “new” pages? So-so. See what I mean?

Good Eating retains its name which indicates that the imperative of cross-platform branding still holds, even if the section name now feels like a holdover from the old days.

I like the expanded Nation & World section—will the bureaus expand as well?—and the hard-hitting editorial about CPS, at least in its subject matter and imperative voice.

The Chicagoland section, an old and now-incongruous name for coverage “about health, parenting and schools” is a mess, as its ambiguous name indicates. Is it hard news, or soft? It feels like the latter, till you find a piece about new CPS honcho Jean-Claude Brizard’s compensation.

Very good to see an expanded Business section. This has long been one of the paper’s biggest embarrassments. Chicago is one of America’s business centers and the Tribune should devote serious assets to enterprising coverage of the subject as news, especially at a time of real dynamic activity, from the impending IPO of Groupon to the public greenmailing underway by the likes of civic cornerstones such as CME and Sears. The execution, today at least, is still a bit soft, but this will be a section to watch.

A&E: Yes, thank you for the renaming. What the hell was the difference between “Live” and “Play” anyway? Was Live meant to be “live” as in live shows? Or “live” as in living well?  Putting theater, which is the strongest franchise under Chris Jones, front and center is bright, as well as tying in the strong local comedy tradition to the carpetbagger Just Laughs Festival in town.  I really liked the Jazz Record Mart piece, and was cheered to see the interview with Sebastian Junger. The scarcity  of books coverage in the Tribune is an embarrassment for a serious daily, and will remain so unless it’s expanded from its Saturday ghetto and back into the daily and, especially, Sunday pages. Too bad the Junger story was a wire grab from the LA Times, since the author was also recently in Chicago and likely would have been a great interview, for one of the Trib’s experienced war correspondents, say.

All in all, a promising start. Now let’s see how they do tomorrow.