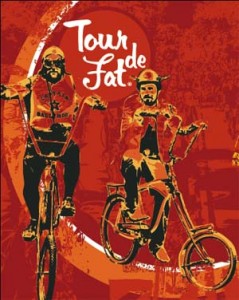 “If Tour de Fat was a drug, ” an attendee to the cycling festival says on its Facebook page, “I’d say it was the same chemical compounds released in your brain and euphoric experience that we know as love.”

Those interested in the way beer, free music and bicycle riding can stimulate that particular feeling would do well to check out the upcoming Chicago leg of the Tour de Fat, which comes to Chicago this Saturday. Centered around a costumed bike parade, the festival, which is hosted by the Colorado-based New Belgium Brewing Company, will have an emphasis upon sustainability. The Car-for-Bike program allows one pre-chosen Chicago citizen to trade in their polluting car for an eleven-speed handcrafted bicycle for one year. Performing acts this year are appropriately eclectic, including vaudeville comedy act The Daredevil Chicken Club, psychedelic blue-grass band The Dovekins, and  self-described “circus punk marching band” Mucca Pazza. Seventies rock mainstay Free Energy headlines the stage. (Michael Gillis)

The Tour de Fat is in Chicago on July 16. Registration for the bike parade begins at 9am, with the parade itself being at 10am at Palmer Square, North Kedzie Avenue and West Palmer Square. Performances continue at Palmer Square from 11am to 4pm.