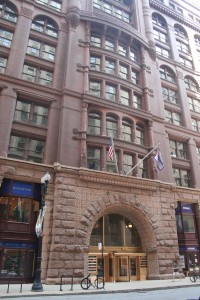 The Frank Lloyd Wright Preservation Trust is honoring its namesake’s position in the rich heritage of Chicago’s architectural history with the grand opening of the new Shop Wright gift store on July 21 in the Rookery, one of Chicago’s oldest and most historically significant buildings. Wright remodeled the lobby of the Rookery in 1905 and it was then restored to his designs at the end of the twentieth century. Heidi Farina, director of multi-channel retailing at the Preservation Trust, explains that the Shop Wright opening has always been the next step after the central offices of the Trust were relocated to the Rookery in late 2010. “It allows us to reach a new, different type of audience,” she says, “not only the tourists but the business community of Chicago.” The grand opening, which the public can attend, will feature “champagne and shopping” from 5pm-7pm together with appetizers, three prize giveaways and a ten-percent discount to the public and twenty-percent to members of the Trust.  Alongside the boozing and browsing, the Trust is offering rare tours to the Rookery Vault storage, which usually has no public access and features catalogued architectural items from recent renovations, including ornamental ironwork and elevator grilles. Farina says that the gift store will contain many new items that incorporate the Rookery’s design styles with floral, geometric patterns and elements taken from the elevators, as well as bird styles that pay homage to the heritage of the Rookery’s name. These will slot in beside the rich catalogue of Shop Wright’s furniture, books, accessories, jewelry and art inspired by Wright’s design work. Together with the new store, tours of the iconic Rookery are being expanded to five days a week beginning at noon every day, Monday through Friday. (Ben Small)

The Go Wright grand opening is July 21 at the Rookery, 209 South LaSalle, 5pm-7pm. RSVP at gowright.org/rsvp-rookery.html.