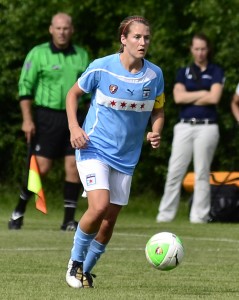 “If Americans don’t fall in love with soccer after this, well, maybe they never will,” said Jim Litke, the sports columnist for the Associated Press, after the US women’s soccer team defeated Brazil in a dramatic comeback in the quarterfinal of the 2011 FIFA Women’s World Cup earlier this month. (They lost the final in a hard-fought nail biter.) The fact is, women’s soccer is a transient phenomenon for most sports fans in the United States. Every four years a squad of twenty-one of America’s best players give it their all, excite the crowds and typically walk away having performed very well. They’ve never finished the tournament in less than third place in its twenty-year history and on two occasions, the team walked away champions. Unlike their male counterparts, who have to play third fiddle to superior play in Europe and Latin America, women in America are arguably the best at soccer in the world. Yet a short time after the tournament ends, the women fade back into obscurity for the next four years as the American fair-weather love affair with soccer continues. But now a newish professional team aims to turn this occasional flirtation into a long-term commitment for Chicago fans.

The Chicago Red Stars are Chicago’s premier women’s soccer team and, although they have had a tumultuous four-year existence since being founded in 2007, they head into the championship finale of this year’s Women’s Premier Soccer League (WPSL) as very strong contenders after winning the Midwestern Conference. Elise Weber, the Red Stars captain and defensive linchpin, believes the success of American women in soccer has much to do with their determined fitness and physical ability. “I think you can be as technical as you want to be but, in the end, if you can’t play for ninety minutes regularly, like in the World Cup, then it doesn’t matter how technical you are,” says Weber. “Fitness is just huge for the women’s game.” 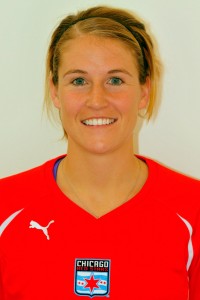 The Red Stars originally played their games at Toyota Park, the home of the Chicago Fire MLS team, when they were part of the Women’s Professional Soccer league (WPS), the top league in the US. Weber, however, explains that the team had to drop out of the league after two years due to financial difficulty. Now the team plies its trade at the Benedictine University Sports Complex in the western suburb of Lisle. “I think there’s still support which is great,” says the Chicago native Weber, “but it is harder to come by support when you don’t have a stadium for all of your games.” She explains that sustaining a team in the top league is difficult, that other teams went through a similar rise and fall after the league began in 2009, including her first professional team, St. Louis Athletica. “I think it’s the nature of starting a women’s league,” Weber says. “It’s hard, at first, to get a lot of fans and support for the games.”

The Red Stars were regardless able to head into the WPSL 2011 season with a strong team. “We had a little bump in the road at the very beginning,” says Weber. “We lost our first game but since then we’ve grown so much as a team and pretty much dominated.” Next year, with the right investment, the Red Stars hope to return to the WPS. For now, they look ahead to the coming weekend’s championship, which sees the Red Stars host games between Orange County Waves, Tampa Bay Hellenic and Boston Aztec in Lisle. Cubs fans be warned, however—watching your local team succeed may be a bit of a culture shock. (Ben Small)

The semi-finals at the Village of Lisle-Benedictine University Sports Complex, 5700 College Road, Lisle are scheduled for 1pm and 3pm on Saturday, July 30, and the final takes place at 1pm on Sunday. Tickets for all the weekend’s action cost a mere $12, or $8 for each day separately, and are available at RedStarsGear.com.