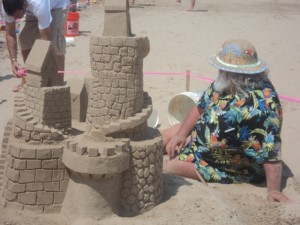 The sun beats ferociously. An ice cream cart jingles. Old men play volleyball shirtless in the distance. Amidst these simple, monotonous joys of Chicago in August is a tent for Edgewater’s first “Sandcastle Open” along with ten teams of adults and children who have been building structures out of sand since nine this morning. Some of the competitors are actually trying, spraying mixtures of glue and water to hold their spires in place. Others, less so: co-sponsor of the event Alderman Harry Osterman’s team erected a half-hearted generic sandcastle, mounted a blue campaign poster for him on one of its towers, and disappeared. The image conjured is one of four wide-shouldered men in suits descending on the beach from a secret service van, filling a mold with sand, and then disappearing again, after a few shaken hands.

As the sweat-drenched competitors toil over their tiny castles, one man lies back comfortably against a mound of pillow-shaped sand. This is Big Wave Dave, the professional sandcastle builder recruited by the Edgewater Community Council for the event. Occasionally, he will stir from his relaxed posture to carve another faux-stone into the impressive edifice he has helped construct, but he has no inclination to rush. “We already won. We’re getting paid to play in sand,” says Dave, who briefly coached the competitors.

Mostly he leaves the work to his stepdaughter, Sara. “He’s the personality, I’m the talent,” Sara once said, according to Dave. That much seems apparent from his disarmingly casual manner. He passes off witticisms and a good-natured Texan accent in a way perfectly in line with his profession. Asked how he set out building the sand labyrinth of winding stairs and parapets, he acts a low-key Michelangelo: “Just took what the sand gave me and carved away what didn’t look like a sandcastle,” he says. Explaining how one becomes a professional sand sculptor, he casually replies, “someone pays you.”

With his white hair, sun-reddened face, and heavyset build, Dave has the appearance of an off-season Santa Claus, a conclusion he apparently came to himself some time ago: On the subject of how he makes his living when he isn’t sculpting, he taps the kitschy Santa drawn in the middle of his hat.

“Where do you think Santa goes when he isn’t delivering presents?” he asks.

Meanwhile, a dark gray blanket of clouds slides closer from the east. Dave seems unimpressed, but the competition is cut short in the early afternoon. As the competitors retreat, rain pours down. Fragments of glue-caked castles break off in the wind and crash down onto the beach. The winning castle—a replica of the original Edgewater Beach Hotel—remains standing after the storm, largely intact. (Mike Gillis)