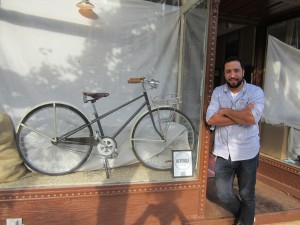 Chicago just lost one of its coolest bike shops, but we’re gaining one that may be even cooler. Last week Dutch Bike Co. abruptly closed its Chicago location, only three months after relocating from Lincoln Park to Wicker Park. Founded in Seattle, the company opened its only satellite store three years ago at 651 West Armitage in a gallery-like storefront. They offered beautiful, practical European-style city bikes by brands like WorkCycles and Linus, most costing over $1,000.

This summer the shop moved to 2010 West Pierce, around the corner from Penny’s Noodles, in search of lower rent and higher foot traffic, says owner Dave Schmidt, speaking from Seattle. But even in bike-crazy Wicker Park, sales were not what he’d hoped for. It probably didn’t help matters that Wicker Park mainstay Rapid Transit Cycleshop, 1900 West North, and Copenhagen Cyclery, another Euro-style store at 1375 North Milwaukee, were only a stone’s throw away. “The last few years have been hard on retail, and even in a big city there’s still a pretty small niche market of people spending that kind of money on a bike,” says Schmidt. He decided to negotiate an exit from his lease before cold weather set in, hence the sudden shop closure. “Chicago winters can be pretty brutal for bike stores,” he explains. “It’s pretty hard to turn a profit in January.”

Schmidt shipped his remaining stock back to Seattle. Head mechanic Chris Williams says he and manager Vince Spina are looking into opening a mobile bike repair business or a repair-only shop in the near future. 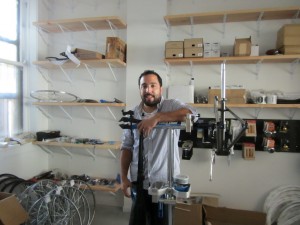 In happier news, Heritage Bicycles General Store is gearing up to open in Lakeview at 2959 North Lincoln, offering locally made city bikes and an in-house café–a first for Chicago. Owner Michael Salvatore is currently renovating the space, a former flower shop, and hopes to launch in November, pending city permits.

Salvatore is a co-owner of New York City’s Bowery Lane Bicycles, which builds old-timey single-speed cruiser bikes in a thirty-percent-solar-powered factory within the city limits. The new store will sell Bowery Lane models as well as Heritage bikes, a new line of commuter cycles that a local metal fabricator is now building in Humboldt Park. “Ninety-nine percent of bikes sold in this country are made in Taiwan or China,” Salvatore says. “But there are so many talented craftspeople in this country, I don’t see any reason we have to buy bikes from overseas.”

Examples of both brands are currently on display in the shop windows. The Chicago-made model, named “Daisy” after the cow blamed for starting the Great Fire, features a skirt-friendly “mixte” frame, twenty-seven inch wheels, a single-speed coaster brake hub, upright bars, fenders, chain guard and a comfy saddle. It retails for $695. In the future Salvatore hopes to roll out diamond-frame city bikes as well as cargo bikes with a large box in front for hauling groceries and children.

Heritage will offer repairs for all kinds of bicycles, and Salvatore plans to hire mechanics that have graduated from the youth-apprentice program at West Town Bikes, a bike education center in Humboldt Park. The students will also have an opportunity to learn barista skills at the coffee counter, which will offer Stumptown beans, house-made sodas and pastries from a local bakery.

While bicycle-shop cafés are a common business model in towns like Portland, Oregon, and Minneapolis, Heritage will be a novelty in Chicago. The vintage space, with a long, communal table fashioned from reclaimed wood and a condiment bar made out of an old White Star stove, should be a cozy place to relax with a hot drink and swap road stories while you get a wheel straightened. “The café is a way to sustain business during the winter months and get people in the door,” says Salvatore. “And bike culture goes hand-in-hand with coffee culture. There are people who are snobs about both.”