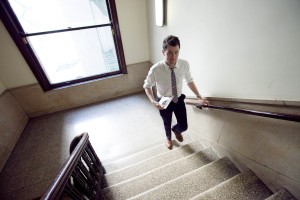 Even before he took office, Mayor Rahm Emanuel knew he wanted a social media director—a position Richard M. Daley did not have. Appointed on Emanuel’s inaugural day, Kevin Hauswirth was not hired to earn votes for Emanuel during the election. Hauswirth, formerly an instructor of communications and advertising director for Roosevelt University, was tasked with the job of supplying Emanuel with a constant digital pulse—a live feed, so to speak—on the city. Rather than just tweet updates and YouTube press conferences, Emanuel wanted to hear what voters had to say over the Internet as well.

Hauswirth, who works on the same floor of the mayor’s building as Emanuel, coordinates the more obvious elements of the mayor’s social media—his Twitter feed, @ChicagosMayor and the Chicago Mayor’s Office Facebook page—but also finds new ways to integrate social media into government.

Take a recent town-hall meeting, which was livestreamed at locations across the city. It was a first for many participants—not just the digital experience and the opportunity to interact with the mayor, but also to have a conversation with fellow Chicagoans they likely wouldn’t have otherwise encountered. “[There was] a South Sider talking to a North Sider talking to a West Sider—all at the same time,” says Hauswirth. 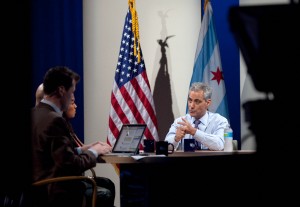 The town hall, Hauswirth says, also allowed those less comfortable with social media or without access to high-speed Internet, to participate in the event in a way that felt familiar. People headed to the meeting at a local community center, where in the past they may have participated in a ward meeting, voicing an opinion that a representative would promise to (maybe, eventually) get to City Hall. This time, though, the mayor heard and responded to questions, right there—over the live cam.

New York City may be able to brag about being the only American city to have a chief digital officer (Rachel Sterne), but that’s only because Emanuel has hired a trifecta of officers, each working under a subset of the digital world in an effort to make government more efficient and transparent : He also has chief technology officer (John Tolva) and chief data officer (Brett Goldstein). Hauswirth says as far as he knows, Chicago is the only city with someone specifically hired to focus solely on social media.

He says Chicago is especially suited to the medium. “The diversity of Chicago and diversity of neighborhoods make it really prime for social media,” he says. He’s constructed a Google Map of the mayor’s various stops around the city, allowing citizens to see where Emanuel has been—and holding him more accountable for stopping in areas that have historically been politically neglected, like the South and West Sides of the city. The site also takes recommendations for future visits. 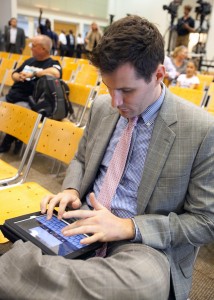 Tweeting on an iPad at the budget town hall. Photo/Brooke Collins

For more realtime access, those with smartphones can follow Emanuel’s realtime whereabouts (well, public ones) on Foursquare—the mayor is checked into locations throughout the day.

All the social media and technology, Hauswirth says, “feeds out of Emanuel’s objective of bringing more objectivity and transparency [to government.]” Hauswirth has been tasked not only with making what Emanuel is up to more accessible, but also with creating an array of platforms through which constituents can speak out—and be heard—themselves.

Rather than using Twitter feeds and YouTube videos to gain support, Hauswirth says the point of all this technology is to make the governing process more accessible and visible. “A lot of the examples are about social meeting for politics, and we’re using social media for governing,” he says.

That was the idea behind chicagobudget.org, the Emanuel administration’s novel idea to crowd-source ideas on budget cuts. More than 3,000 members signed up, submitting 2,588 of their own ideas for how to cut the budget, and casting 62,000 votes for or against other contributors’ posts. Community-moderated, Hauswirth says good ideas rose to the top, while inane or belligerent ones sunk to the bottom. (Only blatantly offensive comments or those using expletives were deleted by the mayor’s office.)

“Anecdotally,” says Hauswirth, “some folks were surprised that we were having this conversation. They weren’t accustomed to such an open and transparent dialogue.” Emanuel called up a couple of the website’s most active contributors to chat with them directly about their ideas.

When the mayor announced the budget, Hauswirth helped to livestream and record the conference for both live and after-the-fact viewing, and created an infographic designed to visually break down the changes. 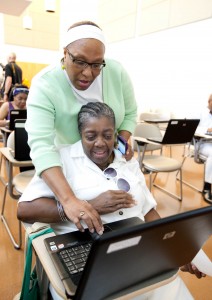 Constituents learn how to join the conversation on Facebook./ Photo: Brooke Colins

Ideas from the website contributed to a budget that includes some apparent no-brainers—centralizing garbage pickup instead of leaving it to the dysfunctional and costly aldermanic system, making heavier cars take the brunt of responsibility for filling another 160,000 potholes in the upcoming year through a higher registration fee, and eliminating the 1,400 police vacancies that were on the payroll but went unfilled.

The revolutionary change that took the Internet into the twenty-first century was Web 2.0, or the concept of giving each individual the ability to contribute to the online conversation themselves, rather than just consume media. But most politicians haven’t gotten there yet—most just send out more pleas for support and brag about their latest accomplishments, filling a too-crowded social network with more noise that goes unheard. “I always say that the best social media strategy is to start by listening,” says Hauswirth. Maybe this online conversation will mean more things get accomplished IRL (“In Real Life”) too.