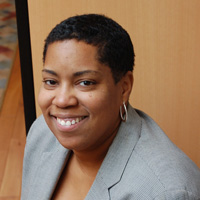 Malcolm Harlan and Akili Lee were never supposed to meet. Their paths were never supposed to cross. Malcolm, a grammar school student at the time, was supposed to be “one of those inner city black kids” who was either going to be someone’s charity case or a kid that too often found himself unnecessarily laying facedown on the concrete with a member of the CPD holding a gun to his head because he fit “their” version of a description, while Akili, a web application developer, was supposed to be on the fast track to being one of Fortune magazine’s “40 Under 40” business minds reshaping the way we digitally communicate and integrate with one another.

But someone—Dr. Nichole Pinkard—had a vision that it was necessary for these two, and others like them, to meet. To be a part of one another’s lives. To change each other’s lives. Pinkard believes that computer programming, digital media and technologically driven art can not only tell stories but change lives, like those of Lee and Harlan. Early participants in the program, Lee and Harlan are still part of Pinkard’s Digital Youth Network (DYN)—Lee as the Director of Digital Strategy and Development, and Harlan as one of the program’s Junior Mentors. For the last six years, DYN has used technology to give young people visions of themselves. Visions unseen in them until now.

As the founder of DYN and co-founder of the YOUMedia learning and energy center housed inside of the Harold Washington Library, the Stanford and Northwestern alum has found a unique way to introduce and indoctrinate new media into the lives of some kids who otherwise wouldn’t have access.

From her office inside of DePaul University, where she recently took the post of Associate Professor in the School of Cinema and Interactive Media (after a joint venture with the University of Chicago’s Urban Education Institute), Pinkard talked about how her mission went from changing the lives of urban youth in Chicago one Macbook Pro at a time to using digital media and technology to help kids take ownership of the stories they will tell throughout their lives.

Explain from the beginning why you felt it necessary to create DYN.
That goes back to me growing up in Kansas City, Kansas where I took a programming class because my basketball coach when I was in eighth grade was the computer science teacher. So I took the class—trying to get in good with the basketball coach—and  loved  it, and from eighth grade on I took programming classes. So when I went to college [Stanford], I majored in computer science. And that was only possible because I had access to [this] outside of my home. Nobody in my house was doing anything with [computers]. But looking around I began to ask, “Why aren’t there more people like me?” and at the same time realizing that what I was into really wasn’t that valued in our communities and that those opportunities I had really don’t exist.

So by the time you got to the University of Chicago’s Urban Education Institute, you kind of had an idea or model in mind of what you wanted to do?
When I got to the U of C we were working with the school mainly around teachers using technology. But to continue to use the technology I wanted to and felt that we needed to use, we [at the U of C] had to do a one-on-one laptop program because the school we were using for space didn’t have any stairs. And once the decision was made to do the 1:1 with the kids, we came to the conclusion that we can’t expect teachers to teach kids how to do all of this stuff, so we had to come up with a space outside of the school and the school day to develop kids to do digital literacy. Our line of thinking became: “How can we do this in a way that’s different and doesn’t feel like school?”

And from that line of thinking you learned…
That any type of technology or literacy is only meaningful if you feed its utility in a way that is meaningful to you. Kids aren’t going to buy into… let’s be honest, kids sometimes don’t buy reading and writing as necessary. So we were like, “Let’s take it outside of the ‘school contextual’ and let’s do this in ways that surround kids everyday environment. Let’s have them create music videos and everything else, but also let’s do more than one program where that’s all they’ll learn. And because we really don’t know what kid’s interests are we said, “Let’s give five programs, five different types of media they can use and allow them to select the ones they wanted to use, the ones they really resonated with.”

And finding instructors like Akili Lee became essential.
I say a lot of the part of the design of what the program does is about who Akili is and what he does. Bringing in the cultural aspects, incorporating hip-hop and stuff like that. We had to bring in real artists too. The same way that I never learned to play basketball from someone who hadn’t played, I never think about teaching kids how to use technology and digital media with people who don’t know how to create it. So we knew we had to go outside of traditional teachers to make that work.

How organic is the program now that it has grown and expanded?
It’s still organic in some spaces. I mean, somethings we know how to do and we do them, and then there are others where we, for lack of a better term, ‘keep it moving.’ We can’t stay stagnant, so we’re always doing something different. Like right now we are doing a youth-created media magazine. I get bored if we’re just doing the “same ol’-same ol’ thing.” Technology is changing. When we first started we didn’t have to think of social media that much. It was nice, but it wasn’t a main focus. But now if you are not doing something with or involving social media you are not where you need to be. We are constantly maturing. We are very close to spinning off DYN as a 501C3 so that we can serve more kids with hope of always keeping a piece of what we do here at DePaul where we can continue to be creative.

What is your ultimate goal for students that come through the program? Like Malcolm, a kid who if you ask him will tell you that the program not only changed but possibly saved his life?
First and foremost is for them to know themselves. To know how to learn. To understand how to represent themselves in multiple and different ways. To be literate in more than one medium. To understand that not only do you have to give back but you have to stay connected in helping and teaching others. When they look back and say [to themselves] that they learned a lot because someone took their time to help [them], my hope is that that creates a cycle. For me, that’s the most important thing that I hope that they do. And probably more important than that: Do they own their stories and can they participate in the conversation using a variety of different media? I’d like every student that’s been a part of DYN to know how to communicate and own their own identity through the use of media.