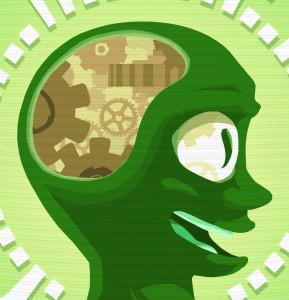 I realized I had become a cyborg—part woman, part machine—one mild evening in April, standing frozen in place on the corner of Clark and Belmont, both hands still fishing mindlessly through the empty pockets of my jeans. My guts turned to liquid, then seemed to evaporate. I had left my Blackberry in a taxi, which had already disappeared into the slow procession of traffic. Calm down. I’ll call the cab company. I reached back into my empty pocket. Oh. Yeah.

When I began work on this article, I thought about going for a week without using technology.

But the experiment wasn’t feasible. My job, an office nine-to-fiver, requires that I sleuth out trivia on Google. With my grandmother’s health problems, I couldn’t possibly tell my family that I wasn’t going to answer my cell phone for a week. How would I know where to be, and when, without helpful trills from my Blackberry’s calendar application? If I left my GPS at home, how was I going to find my way to Bridgeport for an art fair I was scheduled to attend? And seven days worth of messages would flood my Gmail account, and what if they were urgent, time-sensitive or accompanied by delightful pictures of funny cats? A week’s worth of Facebook feed would be lost: I would miss out on marriage announcements and recklessly documented breakups, not to mention Halloween party invitations. I needed technology because the world around me demanded it.

And, as much as I hated to admit it, the idea of leaving my phone behind for a few days—or, worse, neglecting my email—made me kind of queasy.

There’s no question that many of us flirt with addiction to technology. Scientists have shown that when a phone trills, the brain releases a little squirt of dopamine, a natural rewarding chemical involved in learning and addiction. Some scientists who study addiction believe that social customs may help people curb addictive behaviors. People around us make faces if we stagger raucously drunk down the street. Drinking at most offices is unthinkable. But when a new drug is introduced to a naïve population, these customs have not yet developed. In the same way, our society has not developed etiquette to police our use of technology. I’ll cop to chatting on the phone as I order coffee and checking my messages mid-conversation. It feels rude. It feels wrong. I’m not giving the people I am with my full attention. I half-expect to encounter sneers and derision, which would prompt me to blush and put my phone away. But, right now, that social censure does not exist. Increasingly, I wonder if it should.

And unchecked use of technology can hurt the psyche. Research shows that being constantly “plugged in,” subject to our devices’ demands, taxes people psychologically. With half an ear always open for our smart phone’s trill, we live with a heightened sense of urgency and stress. But that stress can also be a pleasure, perhaps akin to the pleasures of gambling. A flashing light on my phone could be an email offering me a compliment or even a job—or discounted Vicodin or promises to enhance my flagging member. It could be a party invitation or a note from an old friend. When I see that flashing light, I feel a tiny thrill of uncertainty and anticipation. The intoxication of possibility. When my phone offers only a Nigerian phishing scam, a tiny bud of disappointment blooms. I wonder if this constant drama is good for me.

Social networking sites present a different sort of psychological trouble. Many of us document our daily victories and struggles on sites like Facebook and Google+, online spaces where public image and personal interaction mingle uneasily. We deliberately craft public identities as we inventory our “likes,” report our moods and activities, tag images that flatter us, and link to articles that interest us or make us look smart. But our hunger for genuine connection undermines us. Moments of authenticity—posts typed out thoughtlessly or in moments of emotion—can reveal our petty meanness and insecurities despite ourselves. We inevitably undermine the image that we hope to convey, even as that image shapes and stifles our interactions.

In her recent book “Alone Together: Why We Expect More from Technology and Less from Each Other,” MIT researcher Sherry Turkle, who will be speaking at the Chicago Humanities Festival, notes that, paradoxically, the social networking sites that connect us leave us feeling lonely, alienated and unsure, driving us to seek further connection through technology. She argues that “in our culture of simulation, the notion of authenticity is for us what sex was for the Victorians—threat and obsession, taboo and fascination.” We struggle to capture flattering snapshots of ourselves, even as a need for connection impels us to be genuine. 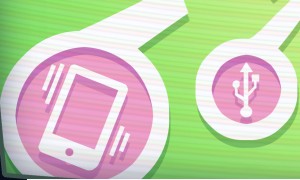 Despite its problems, social networking, like smart phones, personal computers and the Internet, ultimately enhances our native abilities. We cannot maintain our current lifestyles without these enhancements. When they are taken from us, even in service of a job well done or a good night’s sleep, we can feel lost. Turkle says that for some, “technology has become like a phantom limb, it is so much a part of them.” When our phones are lost, we reflexively look to the abilities that they confer as if those abilities are our own, groping uselessly in our pockets for a lost part of ourselves.

Standing on the street corner at Clark and Belmont, I wondered: What if my Blackberry was hooked up to my brain, instead of my fingers? I pictured myself done up like Arnold Schwarzenegger from the “Terminator” films, metal skull half exposed along with one glowing, electronic eye. We’re not so far from making this a reality. Doctors working on the BrainGate project have implanted tiny chips into the brains of people with motor impairments. With the chips in place, people can drive computer cursors across screens or move robotic arms with their thoughts. At Duke University, similar research allows monkeys not only to mentally control robotic limbs, but also to “feel” the textures of the objects the limb touches through electrical signals sent directly to the brain.

These thought-controlled prostheses promise to enhance the lives of people who suffer from paralysis. At the same time, they nudge precariously at notions of what it means to be human, confusing where the body ends and the machine begins. If I can control a robotic arm as easily and precisely as I control my own flesh-and-blood arm, if I can feel what it touches and respond, does that make it a part of me? If not, then must we also imagine the body itself as a technology, controlled by our thoughts, carrying out our will in the world according to our neural commands, and reporting back sensory information to the brain? We have a relationship with our bodies, just as we have a relationship with technology. If the body helps constitute the self, what is happening to our selves as technology becomes more closely integrated with our minds? Our interactions with these devices are still mediated through the body—I control my smart phone with my fingers, not my thoughts. But if we can’t yet call ourselves cyborgs, I suspect that we are close to a tipping point.

Since its inception, technology has allowed our species to adapt to our environment with our own power. We thumb our collective noses at its slower cousin, evolution, which also ramps up our abilities in challenging and changing environments. Evolution might have made us faster if we hadn’t invented the wheel. This would have happened on a neigh-inconceivable timescale, but if speed were necessary for survival, it would have happened, or we would have perished. Through the use of tools, we become more than what we were.

But there are ways in which the mind and the machine don’t mesh well, and these dissonances, such as smart-phone bearers’ skyrocketing stress, and the paradoxical alienation of social networking, can be damaging. Our minds struggle with their new powers, like the body rejecting a transplanted organ. But technology is not going to go away. It is too good at what it does. And we have come to need it to keep the status quo. We have created tools. Now we are learning to use them in a way we can live with. The only choice is to adapt.