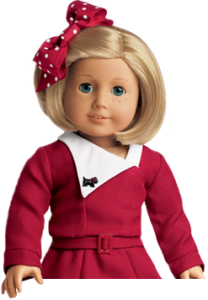 Here is my holiday advice for the Occupy Chicago protesters. On Black Friday, hike up Michigan Avenue and block the entrance to American Girl Place at Water Tower. Such a bold move would really get the media’s attention. And more importantly, you’d be doing me a personal favor.

On the Sunday before Thanksgiving, my two daughters and I wander into the store. “It’s a wonderland,” says the seven-year-old. She clutches the Kit Kittredge doll Santa brought her last year. My thirteen-year-old shoots her the stink eye. The store is crowded with excited girls of all ages, many smartly dressed in stockings and bows. Most are accompanied by mothers who share a look a friend calls “North Shore constipated.”

On the first floor we look over the dioramas that showcase the historical dolls. Each doll comes with an ethnic hook, a back story (available in the book store), and a pocketful of affirmative adjectives (courageous, adventurous, caring, inspiring, resourceful, upbeat, etc. etc. ad nauseam). Julie Albright, for example, is a “fun-loving” child of the seventies who lives in San Francisco with her divorced mother. Julie’s got a groovy bedroom and listens to the Brady Bunch Christmas album on her “deJay Stars and Stripes” record player. Across from Kaya’s tepee (she’s an eighteenth-century Nez Perce Indian) is Molly McIntire’s kitchen (she’s a homefront patriot during WWII). On a table in Rebecca Rubin’s house (she’s a Russian-Jewish girl living in turn-of-the-century New York City) sits a loaf of hallah. Kit Kittredge is growing up during the Great Depression. She and her back story cost $100.

We ride the escalator to the second floor and encounter glass cases that contain dozens of vacant-eyed dolls identical but for slight variations of eye color, skin tone and hair type. Each wears a number. Find the doll that shares your child’s physical characteristics (Is her hair curly or straight? Does she have blue eyes? Does she wear orthodontic head gear?), accessorize her accordingly (Does your daughter enjoy soccer? Horseback riding? Music?) and buy daughter and doll matching outfits (the Coconut pajamas are $60). Voila! You’ve created a doll that is the mirror image of your daughter. Or is your daughter the mirror image of a doll? It’s a “Twilight Zone” episode waiting to happen.

“Which do you think is prettiest?” I ask my oldest.

“They’re not pretty at all,” she says. “I think they’re creepy.” This is revisionist. Not so long ago she too had an American Girl doll.

I turn to the seven-year-old. “Which one looks most like you?” She points to Doll #62.

“That one has freckles,” scowls her sister. “You don’t have freckles.”

“You have two. That doesn’t count.”

The seven-year-old is nonplussed.

“Can we go now?” pleads the thirteen-year-old.

Not before checking out the Doll Hair Salon. Why not pay to have Kit’s hair styled ($10-$20) and her ears pierced ($14)? Or maybe I can buy her a spa treatment to “keep her feeling relaxed.” A facial scrub and a “pampering set” (featuring a “faux face mask”) cost only $12, bikini wax and eyebrow thread not included. Next to the salon is the Doll Hospital (maybe Kit has TB), and farther down the hall is the American Girl Café. Had I been a better parent, I might have arranged brunch ($19 a person, not including doll), or maybe even tea ($18). Fortunately, I’m not a better parent. We head back down the escalator.

“What do you want Santa Claus to bring you this year?” I ask the seven-year-old as we exit her wonderland.