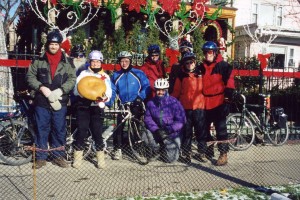 Christmas is a great time to be in Chicago, even if you’re not a Christian. As a largely nonobservant Jewish person, I make a point of staying in town during the holiday because I always have a blast. It’s the best of both worlds: I get to enjoy the spirit of brotherhood and good cheer that prevails, as well as taking the day off of work, but there’s no pressure to gather with relatives or exchange gifts. For me, Christmas is a chance to spend quality time with members of my family of choice—my longtime Chicago friends.

While religion isn’t a big part of my life nowadays, I always enjoy observing one of the great Jewish-American rituals: Chinese food and a movie on Christmas Eve. Each year a handful of my Jewish, Buddhist and atheist friends, as well as a few Christian “strays” who aren’t spending the holiday with relatives, join me for the annual Christmas Eve Bike Ride to Chinatown. This year it leaves from Daley Plaza at 5:30pm. All are welcome; details are online at tinyurl.com/xmaseveride.

Afterward we often take in a flick at a Loop theater and/or go out for more drinks, usually at Delilah’s (2771 North Lincoln, (773)472-2771), the legendary Lincoln Park punk rock and bourbon bar. It’s always buzzing on Christmas Eve, when Chicago expats return home from the coasts and meet up with old pals to reminisce over Old Crow and PBR before opening presents with their families the next morning.

On Christmas Day, I like to get up at a decent hour and do the Chicago Cycling Club’s annual Bagel Ride, cycling a few miles for brunch at a delicatessen (The ride departs at 10am from the Robert Crown Community Center, 1701 Main Street in Evanston and rides to the Bagel restaurant in Skokie).

Although the weather was gloomy, last Christmas was a particularly fun-filled day for me. Recovering from the previous night’s karaoke session at the Blue Frog in Streeterville (22 East Hubbard, (312)527-1200), I overslept the start of the Bagel Ride. But a friend and I caught the Red Line up to Howard Street with our bikes and then rode a few miles northwest to meet up with the group at The Bagel deli in Skokie (50 Old Orchard Center, (847)677-0100). There we enjoyed hot coffee, blintzes and a lox, egg and onion scramble—plus the company of the friendly crew of cyclists.

Next my friend and I pedaled a few miles west in a sleet-filled headwind to Glenview to visit some Israeli friends and to take their kids tobogganing on the steep, kick-ass sledding hill at nearby Flick Park (3600 Glenview Road). After warming up with spice cake and cider, we backtracked to the Old Orchard Mall to catch a matinee of the less-than-heartwarming thriller “Black Swan.”

Following that, we rode the CTA’s Skokie Swift Line back to Howard Street and pedaled to Sher-A-Punjab (2510 West Devon, (773)973-4000), my go-to joint for Indian buffet. There we refueled with scrumptious mutter paneer, lamb curry, fresh baked naan and sizzling tandoori chicken.

Cruising southeast on Lincoln Avenue, we topped off our day of secular Christmas fun with a nightcap, meeting up with Jewish friends at a German pub, the Huettenbar (4721 North Lincoln, (773)561-2507) for goblets of Kostritzer Schwarzbier dark lager. “Hutten” means cottage or shack, and the tavern’s soft lighting and rustic rafters make you feel like you’re in a cozy Alpine cabin, creating a sense of “Gemutlichkeit”—warmth, comfort and belonging.

Full of delicious ethnic chow and pleasantly (but not dangerously) buzzed, we cycled home in the now-crystalline winter night. We also felt gratitude to all the folks who put in a hard day’s work on December 25th, making it possible for us to enjoy this delightful non-Christian Christmas.