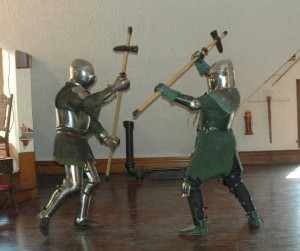 Who hasn’t heard the tales of Arthurian knights or watched “Lord of the Rings” and had a fleeting desire to learn how to wield a blade?  The Chicago Swordplay Guild has taken it upon itself to preserve the history and culture of centuries-old Italian sword fighting by teaching it to others.

The guild offers eleven-week courses on either the Medieval Longsword or the Renaissance Rapier that teach students the historical background and how to use the weapon, with dagger combat and grappling thrown in. “From day one, it’s not just a matter of it being a martial art,” says Gregory Mele, co-founder and curriculum director of the CSG (chicagoswordplayguild.com). “We ground it in the history of the tradition.”

The foundation of the CSG began in 1992 in the library stacks at the University of Illinois at Urbana when Mele came upon “The Works of George Silver,” written in 1898 by Captain Cyril Matthey. The book hadn’t been checked out in forty-five years. “These martial arts were extinct and had been for a long time; there was no one who you could go to,” Mele says. Silver’s original work laid out the way the sword and shield were used. It was the proof Mele needed that this was, indeed, how sword fighting was taught in 1599. 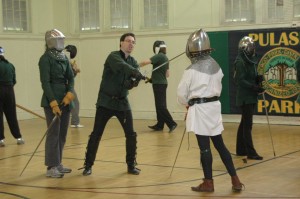 Mele combined his previous experience in modern fencing, Aikido, Tai Chi and medieval reenactments with the lessons in Silver’s book to lay the basis for the CSG. He continued tracking down old books for seven years, until he met co-founder Mark Rector. In 1999, they began offering the first of the CSG classes at the Pulaski Park Auditorium.

Traditional sword fighting is not the same as what’s depicted in cinema—but it’s certainly not more boring. “In the movies, the hero and villain square off and bang their swords together for an extended amount of time,” says Mele. In a real fight “many people are surprised by how fast the swords move, how relatively light the swords seem, and how fast the fight can be over—which makes for good martial arts, not good movies.”

“What we do is more like what you would see by going into a martial arts dojo,” Mele says. There are many similarities between the European martial arts and many Asian martial arts, including the mental and physical demands required. “There is a definite sense of camaraderie,” Mele says. “There is something very intimate about swinging weapons at each other.”

The CSG works to procure swords that are as similar to those used in the fourteenth through seventeenth centuries as possible. Most of the swords weigh two or three pounds, with the largest weighing seven pounds. Students use a combination of wooden, blunt steel and sharp steel swords, depending on their skill level. “If you’ve never used a sharp sword, it’s amazing how effective they are,” Mele says.

While new students only need a willingness to learn and comfortable training clothes, Mele notes that many who advance eventually obtain their own gear. For those who choose to pursue armored combat, this includes made-to-order medieval plate armor, which generally weighs about fifty pounds. “You can move quite well in it. It’s not clunky,” Mele says. “It weighs a little less than what a modern marine carries on their back.”

Students who show respect, willingness to learn, and interest may be invited to join the guild, where they progress to learn the one-handed sword, armored combat and gain more in-depth experience. The invitation-only format is designed to ensure safety—these are sharp swords.

“There is something poetic about the idea of knights and swords,” Mele says. “Sword fighting has been part of our culture for several thousand years.”