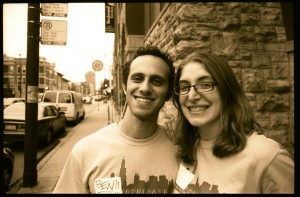 When people think of learning, they usually think of a teacher and some students—maybe in a classroom, possibly in an art studio, a computer lab or the outdoors. And sadly, after primary education, people usually can’t also help thinking of those massive tuition checks—or student debt. But Sarah Press and Ben Paul, friends from grade-school and the co-founders of CommuniTeach don’t like that there is a price tag on learning.

Press and Paul founded CommuniTeach (CommuniTeach.com), a website for people who want to freely learn and teach those in their community. Founded in 2010, the website serves people in Pittsburgh, Chicago and Boston, but they want to expand. The company is built around their personal learning philosophy of peers sharing knowledge. “The world is better when people come together to freely share their skills together,” Press says.

So when users make a profile, they designate skills that they can teach and skills that they want to learn. After the profile is created, a person can sign up for LearnIts being taught by other users in their area or create a LearnIt themselves and teach others their skill.

“One thing I’ve definitely learned is that people reliably and consistently underestimate what they have to offer to others,” Paul says. He tells them over and over that almost everyone has a skill that they can teach. For instance, even just speaking a native language is a skill. If you can speak English well, make a LearnIt. Paul says his roommate would probably come to learn from you. Or if you know how to properly cook eggs, Paul himself would like to learn that skill.

To help people figure out skills that they can teach, Paul and Press created a quirky quiz that users can take to pinpoint their teachable skills. Through informal questions, like “What inherently nerdy qualities do you have?” and “A bit of alcohol is good for the soul. Got any cool alcohol-related skills?” their quiz helps people realize that they can find the skills that they can teach others by looking at what they do in their everyday routine.

LearnIts come in two forms: the one-on-one and the group session. A one-on-one LearnIt is about an hour, and can take place anywhere that is good for both people. The group session is usually about two hours with allotted time for socializing and chatting.

Press and Paul have kept the program free, part of their mission to create relationships that are built on a more equal, peer-to-peer approach, rather than transaction-based learning relationships. They want people to use the site because they want to connect with and support each other, and of course learn some new and interesting things.

The idea for CommuniTeach evolved from a tutoring program that Press created at the University of North Carolina. When she was a student, her roommate was an early-to-bed, early-to-rise person, and Press was definitely not. After a late night, Press would end up sleeping on the couches in the common rooms in order to avoid disturbing her roommate. Most mornings the staff would find her and wake her in time for her to get to class.

Press became friends with the staff and wanted to give back to them. So she set up a free tutoring program for their kids. The children would be matched with students at UNC based on what they needed to learn and what the students could teach.

But Press realized she didn’t like the binary notion of those who teach and those who learn—she wanted everyone to become both a teacher and a learner. It was then that CommuniTeach was born. Through allowing and encouraging everyone to be both a student and a teacher, Press and Paul have found that they are able to build communities and make it easier to cross that divide and become friends with another student or teacher—something that can be intimidating in a typical learning environment.

For example, Paul took a class, not to learn a language, but rather on how to teach a foreign language. The teacher took the group around the city and to a mall, pointing to different items and saying the word in Spanish. Paul had so much fun learning how to teach a language that he actually picked up some Spanish too. But, he says, more significant than the skills he learned was the friend he made. He went out to lunch with the teacher and they continue to get together as friends.