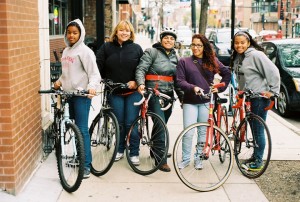 Chicago is blessed with five nonprofit bicycle education centers where locals can learn to ride safely or turn a wrench, spread across the city from Lakeside Velo Works in the South Chicago neighborhood to the Recyclery in Rogers Park. These community bike shops strive to be inclusive, but when most of the other participants are guys, a female who’s new to cycling or mechanics might feel out of her element. Fortunately, West Town Bikes in Humboldt Park offers a couple of cool programs just for the ladies.

West Town is located between the giant flag arches on Division Street’s Paseo Boricua (Puerto Rican Way). Since 2004 the nonprofit has run bike safety and mechanics programs for thousands of underserved young people, mostly taught off-site at schools and community centers, plus maintenance and repair classes for adults. Ciclo Urbano (Urban Bike), a full-service shop at the front of the space, helps fund these endeavors through sales of refurbished rides and repair work.

Women and Trans’ Night, an open shop session strictly for females and transgendered people, launched a few years ago as a space where one could “wield a wrench in a non-patriarchal environment,” according to West Town’s website. “Women who came to Tinker Town Tuesdays [one of the center’s co-ed open shop sessions] used to be a little intimidated by the macho fixed-gear bike boys who were popping up there,” explains instructor Kim Werst.

Unlike at Tinker Town, most people who show up for Women and Trans’ Night are relatively inexperienced at bike repair, but seasoned female mechanics are on-hand to help diagnose problems and teach newbies how to clean a chain, adjust a derailleur or straighten a wheel. “It’s more like a walk-in clinic for bikes rather than a DIY garage,” Werst says. A donation of $10 per hour spent at the shop is suggested, and spare parts are available for sale.

This testosterone-free session has a different feel from Tinker Town, Werst says. “It’s more relaxed and more goofy, and there’s a lot of girl talk.” Free box wine is provided, there are always plenty of homemade snacks on hand, and music from Patsy Cline to Nicki Minaj plays on the sound system.

Although brute strength can be an advantage in bike mechanics, Werst and the other female instructors, including Ciclo Urbano manager Mia Moore, Lyndsi Barboza, Colleen Hughes, Katie Kolon, Molly Medhurst, and Esther Newman, know tricks of the trade that can help level the playing field for petite women. They teach attendees that you can use a long-handled tool for additional torque, wrapping the handle in a towel to protect your hands, or gently tap on a wrench with a rubber mallet for extra oomph. Bike Aid anti-seize fluid helps loosen rusted-over parts like tight brakes and stuck seat posts. And when all else fails there’s always teamwork. “It’s fun when six people surround a bike and work together, trying to get it out the door by 10pm,” Werst says.

While Women and Trans’ Night can be crowded during the summer, winter is a great time to stop by and learn new skills. Every few months the shop holds a women’s clothes swap where you can trade bike clothing and other garments. “I once took home an awesome gold lame dress,” Werst says. The next swap is Wednesday, January 25.

For younger ladies, West Town hosts Girls Bike Club, a drop-in program that focuses less on mechanics and more on the social aspects of cycling. “There was a noticeable lack of girls participating in our general Bike Club [an after-school session where kids hang out and work on bikes],” explains West Town’s Program Manager Liz Clarkson. Last summer she brainstormed with teenage apprentices on ways to get more girls involved with cycling, resulting in a weekly program that draws young women ages thirteen to twenty-two.

While Clarkson says parents in the neighborhood usually encourage their sons to ride bikes, the parents generally insist on driving their daughters places or making them ride the CTA, which costs money the girls might not have. “Biking is empowering because it allows girls to take the initiative for their own transportation at a time when they don’t have much control over their lives,” she says.

So far the club’s activities have included two-wheeled field trips to Oak Street Beach, the Harold Washington Library, and a craft store on the Near South Side where the girls talked with the owner about necessary job skills. Some of the girls and their adult mentors also joined one of the monthly Women Who Bike brunch rides organized by Dottie Brackett, an attorney who writes the blog Let’s Go Ride a Bike. “That was an awesome opportunity for them to meet professional women who are also into bikes,” Clarkson says.

The girls screen-printed clothing and made jewelry out of bicycle chains to raise funds for a field trip to the Youth Bike Summit
last weekend in New York City, where they gave a talk about the club. Some of the members also formed a dance troupe called FIYA (Fabulous Intelligent Young Adults), which performed at the Hideout’s Bike Fall festival, and the club hopes to stage a bicycle fashion show this spring. Clarkson wants to get more of the girls involved with mechanics this winter. “It’s been a low priority so far, but we figure there’ll be plenty of time to be in the workshop in February when it’s awful outside,” she says.

Last week, as the girls and their adult mentors gathered at the center for a bike ride to the ZooLights festival in Lincoln Park in thirty-degree weather , they shared their thoughts on why Girls Bike Club is important in their lives, and their favorite memories from the fall.

“I’m one of the founding mothers of the club,” said Shacora Hawkins, fifteen, one of last summer’s apprentices. “We wanted to show the ladies that it’s OK to be cute and still ride your bike.” As a result of her involvement with West Town, she currently serves on 26th Ward Alderman Roberto Maldonado’s traffic and public safety committee, providing input on where bike lanes should be installed in the ward.

Hawkins’ mother, West Town office manager and Girls Bike Club mentor Coralee Montes, said the club plays a key role for the girls as a safe place to relax and discuss problems they’re having in their personal lives. “It’s fabulous because it gets them out of the street and puts them in a space where they can be responsible and productive,” she said.

“By getting more girls on bicycles we are challenging the status quo of transportation biking being mostly led by males,” added mentor Zorayda Ortíz. “We’re not idly standing by and letting our young women fall behind.”

JoJo Araud, seventeen, said one of her favorite memories from the fall was performing with the FIYA dance troupe outside the Hideout on a blustery October day. “We had a tent we used as our dressing room and it was so windy we had to use bricks and bikes to keep it from blowing away.”

Ladijah Hollingsworth, sixteen, arrived at West Town and showed her friends a glittery evening dress she planned to wear to Lane Tech High School’s winter ball. She said last month she and three other girls from the club rode in the Afterglow cyclocross race in Humboldt Park’s namesake green space. It was a muddy, slushy course but all four competed in tutus. “It added a little feminine flair to the whole racing thing.”