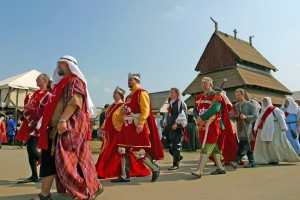 “I’m just checking Twitter for updates on the tournament,” a Medieval maiden says. This maiden is a member of the Society for Creative Anachronism (SCA), a group dedicated to researching and recreating the arts, skills and traditions of pre-seventeenth-century Europe “as it ought to have been.” In other words, they enjoy the luxuries of indoor plumbing and easy access to the Internet through smart phones hidden in corsets.

At their Twelfth Night event at the Irish American Heritage Center, Katherine von Scholsserwald (Kathryn Westburg in real life) has a whole peasant’s house laid out in one of the rooms. She uses planks to delineate the animals’ sleeping area, the cooking fire, the eating area and the bed. She has bowls made of horn and wood, spoons made of ivory and the few metal belongings a peasant would have had—metal was very expensive. She has drawings of what those houses would look like in Yorkshire circa 1200. She even has leeches, which she is going to show to attendees later in the day at her medieval medicine talk.

Von Scholsserwald, a retired TV producer, has been in the society since 1979, when it only had about four kingdoms. Now with nineteen kingdoms worldwide, the SCA boasts more than 30,000 members. Chicago is part of Midrealm, or the Middle Kingdom. Each kingdom is ruled by a king and queen, who win a tournament to wear the crown. The ladder of power descends from them, with highnesses in waiting, barons, baronesses, seneschals and so on.

Since going to any event means dressing up, and first-timers might not have their own period clothes, members offer clothes for them to borrow. The costumes vary widely. People dress up in Turkish style, Elizabethan era, Elizabethan peasant era, 1200s, 1300s, Spanish and French attire—as long as it is pre-seventeenth century, it will do.

Event steward Mistress Juliana Peri da Novellara (Julia Needlman) works, in real life, as a custom dressmaker in Chicago. By night she makes costumes for the SCA, and they’ve awarded her a Laurel Award for mastery of the art of dressmaking.

What excites her is figuring out the how and why things are made. Once, in a bathroom at an SCA event, she heard a woman saying that when she went to Europe, she couldn’t find a bow in a painting before 1495. So Novellara started wondering why this was. She looked through her books and found that the woman was right. There were ties, not bows. She figured out that the ties were slipknots, and they used slipknots because a bow would not stay tied in silk chord, but a slipknot would.

“My real clothing got so much better because my SCA studies taught me so many interesting things,” she says.

After twenty-three years in the SCA, Novellara says her favorite thing—even more than the clothes—is the people. She loves the welcoming spirit and the community of the SCA.

“It’s all here. It’s a social-club learning-experience place. How nice that is, to feel like you belong. It’s belonging for everybody.” 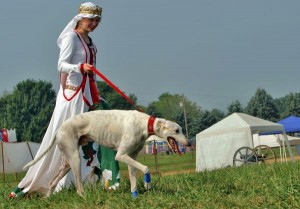 Mistress Gianetta Andreini da Vicenza (Jen Small) says the trust runs so deep in the SCA tribe that no matter where she travels to attend an event, any member will open their home to her, even though they may have met her only once. And she returns the favor; da Vicenza is hosting the prince and princess for Twelfth Night.

“People I have not met, but I just happen to know they do this medieval stuff like I do, will open up their home, let me stay there, feed me breakfast. The coolest thing is this community feeling of trust, which I don’t think is in the general population. ”

While eating Chinese food made from thirteenth-century recipes from Shanghai, da Vicenza describes the group as “4H for Medieval Enthusiasts.”

“It’s not like a Renaissance Fair for outsiders to consume, and it’s not like Civil War reenactments, in which every aspect needs to be as accurate as possible. Everyone has their projects: cooking, lace-making, singing, costuming, fighting, jewelry making, equestrian. They come and show off their projects and then everyone has a meal together, like 4H.”

Even though they strive to be as medieval as possible, no one will be scorned for pulling out a cell phone or talking like a twenty-first century person.

“There’s also a lot of tolerance. You look around and some people are dressed up, some people are super ‘caz’, some people look like they stepped out of a painting, and all time periods and places. There’s an Aztec dude, but then you’ve got Roman guys and Elizabethan ladies hanging out together, and it all works.”