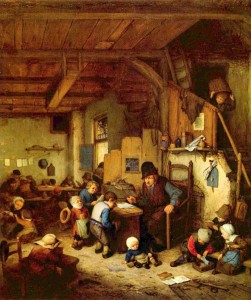 Everyone agrees that teachers are central to the learning experience. And everyone—teachers, administrators, union officials, school-board members and state legislators—will agree that we should have the best teachers available for our children. But the reality is that the system currently in place to prepare, and more importantly, to credential teachers is gamed against older students.

If you are a returning student, someone with some knowledge and experience in the world—experience that might be important in the classroom—there are institutional roadblocks in place that make it almost impossible to get a teaching certificate.

Ten years ago, I returned to school at forty-three years old to become a teacher. I succeeded, and have been teaching since the fall of 2005. I am not writing this to settle scores, or to whine, “They didn’t let me in.” They did let me in. And I love teaching.

But I discovered, as a returning student, that I faced obstacles other, younger students did not face.  Even before I reached student teaching I felt pushback from some (but far from all) professors and administrators, a lack of patience with older students, an unstated, or half-hidden, question “Why are you here?” that lay beneath even the most mundane interactions.

The idea that writing was not working out as a full-time career became clearer throughout the summer and fall of 2001. I had been laid off from a writing job at a dot-com in January 2001 and my earnings as a freelance writer steadily fell throughout the year as every newspaper I wrote for cut back their freelance budget or, in one case, stopped publishing altogether.

Teaching English seemed like an ideal second career. After all, I had twenty years of experience writing and editing. I knew from the inside how to write and, more importantly, why having strong writing skills was important.

I tested the waters. I signed up as a substitute teacher at several local public and private schools, and I began to tutor high school students one-on-one to prepare them for the SATs and ACTs. I found I enjoyed it.

So, in March of 2002, I applied to the program at UIC. Six months later, I was getting my masters in education at UIC.

In some ways it was like returning to a familiar place. I had always enjoyed school, especially college. Suddenly, I was surrounded by college students and by students who had gone straight from college to a graduate school. But many of them were there because graduate school allowed them to delay making choices in life, and they had no idea what they wanted to be when they grew up. I didn’t know, either, when I was their age.

From the moment I began flipping through the course schedule to register, I could see how the program was tilted against older students.  Some classes were held in the evening. But other, important ones, were scheduled during late mornings or early afternoons. Most frustrating were those classes scheduled to begin at 3pm or 4pm, times that were almost convenient, but at times that only students in dream jobs, with very flexible bosses, could make. (And if you had a boss like that, why would you consider changing careers?)

I was lucky. As a writer, I had a very nontraditional schedule. And, I must add, a very indulgent wife who worked full-time and paid the bills. But I knew many returning students with full-time jobs, who would have made good teachers, but couldn’t manage to fit their classes into their schedules.

One guy I knew was working-class, in his early thirties, built like a fighter. He worked, I think, in a warehouse or some small factory. He had blown off high school, as many guys do, but had discovered poetry—he loved slam poetry—and then reading. By his early thirties, he was very well read, very passionate about the importance of reading. He would have been just the kind of teacher who could reach and teach a squirrelly classroom squirming with teenage boys who were reading below grade level and proud of it. But he just couldn’t swing it. Every semester he had trouble fitting his schooling around his work schedule. He didn’t want to take on a lot of debt. He preferred to pay his tuition as he went. He avoided student loans, and instead dropped down to part-time status, which in many education programs is considered the first step to dropping out. Eventually he did drop out, but only because he could no longer find required courses being offered at times he could take them.

If you are changing careers, the unstated assumption some make is that you must have made some terrible mistake in your previous career, or had some awful addiction problem (drugs, alcohol, gambling) that had prevented you from continuing in your chosen career.  I still remember the dead-eye look my counselor gave me, and quiet “uh-uh” she said, when I told her that even though I had worked in newspapers and publishing for almost twenty years, I didn’t see a stable future in those fields.  Her face fell when I told her I wanted to become an English teacher and teach writing. “There are so many students trying to become English teachers,” she said quietly. “Have you considered math? We really need math teachers.”

I could teach math, I said, adding I was actually good at it in high school, and had taken calculus in college. Her face brightened. But I love writing and literature. She gave me the sad face again. “Okay,” she said under her breath, and signed my registration materials.

But the real barrier for returning students, the wall that keeps many older students, with families and jobs, from entering the field is student teaching. Student teaching is ten-to-twelve weeks of unpaid labor in a school in which the student experiences, in real time, in a real classroom, what it is like to be a teacher.  Student teachers teach classes, give assignments, grade them and, most importantly, experience what it is like to stand day after day in front of a classroom of students of widely varying abilities and interests, and keep their attention.

Student teaching is an attempt to give students a first taste of what this life, the life of a teacher, is like. How well it goes depends on lots and lots of variables: how good the mentor teacher is, how good the education program is, how prepared the student is, how good a fit there is between the student teacher and his or her teacher, school and students.

For student teaching to work, the way it is currently done, the prospective teacher must be available all day, every day, from 7am to 4pm. And have ample time in the evening and the weekends to prepare and grade. There is no time in that schedule for full-time work. If you need money coming in for family and rent and food, you cannot be a student teacher.

It is, for all practical purposes, an unpaid internship, an apprentice program without room and board. The teacher I worked with when I was a student teacher jokingly referred to me as her slave. And in many ways I was her slave, or at least a slave to the system.

This slavery works—kind of—for college students. Much of what college students do is unpaid. I never got paid for stories I wrote for the college paper. And I never received anything but some free albums for all the hours I put in at the college radio station, writing and performing on a radio comedy show.

But once you step into the work world, working for free seems like slavery. And if you have a family to support and rent to make, you need a steady income. And without that income, it becomes hard to be a student teacher, and, ultimately, to get that piece of paper that will help you get a teaching job.

I was friends with a single mother in the education program who worked as a waitress. She was another returning student with a passion for English and life experiences that would have been valuable in the classroom. She had her first child when she was in high school. With her mother’s help she had finished high school, but in her twenties she couldn’t juggle being a single mom and college. Now that she was in her early thirties and her children were more independent, she wanted to get her degree. She did all of her coursework but was stopped at the gate marked “student teaching.” She was already, in her words, “up to my butt in student loans,” and did not want to go deeper in debt. She also did not want to give up her waitressing job in case teaching didn’t work out. She was literally paralyzed with doubt. She could not figure out how to do her student teaching without going bankrupt. She did not finish the program.

One week I put lots and lots of extra time polishing up a feature story for another paper. The story morphed into one of those nightmare articles involving lots of editing and rewriting. In the end, the story was killed and all I got for all my work was a weak little “Sorry” on the phone from the editor, a reprimand from the chairman of the English department for using the office phone for non-teaching business—and a reminder of why I was trying to change careers.

Worse still, I was not prepared for my classes, and it showed. The students were rowdy, hard to manage; my lesson plans were sketchy, my in-class activities did not lead to any new learning. I learned more than I wanted to that day about what it takes to be a fully prepared teacher.

A teacher friend of mine calls student teaching a necessary evil. But like a lot of necessary evils, it is more evil than necessary. It is a system that favors younger students, who know little about life and how the world works outside the school walls, and locks out older, more experienced prospective teachers.

Paying student teachers would limit their numbers and slow down the (currently nonexistent) hiring process. But the current system prematurely weeds out many older students who have just the kind of experience, knowledge and talent that could enrich a classroom. I use my twenty years of experience in newspapers and the corporate world every day when I teach.

Every time I read about the need for better teachers in the classroom, I think about all the returning older students who were prevented from becoming teachers by a system rife with unaccommodating schedules and professors and administrators who were biased against older students, or who were stopped, just one semester short of the finish line, by a long unpaid apprenticeship they could not afford to experience.