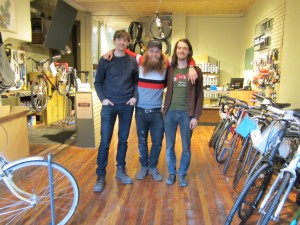 “Bikers of Chicago unite! You have nothing to lube but your chains!”
—Suggested manifesto for Comrade Cycles

First there was Atomix Café, with its giant mural of cosmonaut Yuri Gagarin, then Revolution Brewing, with a red star logo and tap handles shaped like upraised fists. By opening Chicago’s newest communist-themed enterprise, the three worker-owners behind Comrade Cycles hope to make their Marx on the local bike scene.

The new shop is located in, appropriately, Ukrainian Village, a stone’s throw from Atomix and other sternly named businesses like Bleeding Heart Bakery and Permanent Records. Its logo features Soviet-style artwork, portraying the three founders as heroic proletarians in overalls. But the comrades behind Comrade aren’t just cashing in on Communist kitsch. They chose a name that reflects their egalitarian business model, a revolutionary one for this city.

Although they’re young, the co-owners have labored at a who’s who of local for-profit and nonprofit bike shops. Jesse Hautau, twenty-six with a Viking’s beard, has worked at Rapid Transit Cycle Shop, managed Working Bikes and taught mechanics to underserved youth through the Recyclery and West Town Bikes. Mustachioed Bailey Newbrey, twenty-five, has wrenched at stores in Kenosha, Wisconsin and Zion, Illinois, as well as Rapid Transit, Johnny Sprockets and Blackstone Bicycle Works. Clean-cut Steve Parkes, thirty-five, has volunteered at Working Bikes and the Recyclery, and also owns Newleaf Natural Grocery in Rogers Park.

As we hang out in the small storefront, sipping coffee while the Yeah Yeah Yeahs blast in the background, Hautau says that while several local bicycle stores treat their employees fairly, traditional bike shops are often exploitative, with absentee owners paying skilled workers near-minimum wage. “A lot of people work as mechanics simply because they love bikes and they love helping people,” explains Newbrey.

“We wanted to create a democratically run business where we are the workers and the owners,” Hautau says, adding that future hires will be able to work their way up to ownership as well. The founders took inspiration from cooperatively owned shops like Citybikes in Portland, Oregon, and the Hub Bike Co-op in Minneapolis, but Comrade is currently registered as a for-profit business, since Illinois does not yet recognize worker-owned co-ops. “As the U.S. economy has gone into dire straits and the gap between the rich and poor gets bigger, a worker-owner cooperative is a more sound business model for workers and communities,” Parkes says.

While the reputation bike-shop employees have for being grouchy snobs is only just below that of record store clerks, the comrades believe their more equitable business structure will also make this a nicer place to get your derailleurs adjusted or shop for a new ride. “Many people have written about the relationship between the mechanic and the customer being a negative one,” Hautau says. “Since we have more invested in the business, I think you’re more likely to have a good experience here. Personally, I really enjoy helping keep people on the road.”

The shop’s focus will be on everyday transportation cycling, but the owners are also bike-touring enthusiasts and cyclocross racers, so they plan to fill those niches as well. While Newbrey is excited about offering nifty commuter gear like generator-powered lights and low-maintenance, weatherproof internally geared hubs, he says, “We’re also going to have to wait and see what the neighborhood needs.” For starters, Comrade is selling hybrids and city bicycles by Electra and Torker, plus Surly touring and cyclocross bikes and fixies by All City. They’re also stocking meat-and-potatoes accessories like Chrome messenger bags, SKS fenders, Planet Bike lights, Kryptonite locks, Bell helmets and Continental tires.

With their decades of combined wrenching experience, the comrades say repair work and bike builds will be the shop’s bread and butter. And since Hautau is also a frame builder, operating out of Bridgeport’s Bubbly Bicycle Works welding shop, Comrade also may be able to repair your steel Schwinn Traveler that got cracked last time a taxicab doored you. Eventually they hope to offer a line of custom cyclocross frames.

While the shop’s location, on a retail-rich stretch of Chicago Avenue, seems like an ideal one, Comrade is also located within a mile radius of four other bike stores: Rapid Transit, Copenhagen Cyclery, Upgrade Cycle Works and Ciclo Urbano. Has the area reached bike-shop saturation? “Other cities I’ve been to like Portland, Seattle and Philly have an even higher density of bike shops,” says Hautau. “Biking is growing and growing in Chicago, and having more shops only makes it more visible as a transportation option.” As if to prove his point, a young professional wanders in off the street as he’s talking and asks about getting a tune-up, even though the store isn’t officially open yet.

Last Saturday Comrade hosted a bingo fundraiser for the Cycle Messenger World Championships, which takes place August 3-5 outside Soldier Field. The store’s grand opening is this Thursday, March 1, from 11am to 8pm. They’ll have pastries from Bleeding Heart on hand, plus a yet-to-be-named custom blend of coffee created especially for the bike shop by Chicago’s Resistance Coffee, a left-leaning roasting cooperative.

So how is launching a new bicycle store like staging a revolution? “I don’t know that it is,” responds Hautau. “At the end of the day we’re just regular old capitalists. On the other hand, any kind of biking that takes place is a good thing, whether it’s people making deliveries by bike, commuting, racing or riding for fitness. All those things make this a healthier city. Opening a bike shop may not be a revolutionary act but it is turning the wheels of change for the better.”

About this column: Chicago’s flat grid is a checkerboard where the players plot their moves across the plane. One of the best things about living in this town is the multitude of options for getting around without owning an automobile: walking, cycling, CTA, Metra, cabs, car sharing, water taxis and more. With gas prices on the rise and Rahm promising major improvements to ped, bike and transit infrastructure in the near future, things should only get better. This column, which takes its name from a song by the Hideout’s old house band Mr. Rudy Day, will explore the many facets of Chicago’s green transportation scene. We’ll be bringing you news on the latest controversies, events and local movers and shakers, plus travelogues and tips for getting the most out of your car-free or car-light lifestyle. It’s going to be a great ride.

The Green Line: Upcoming meetings, rides and other events you need to know about

Streets for Cycling at UIC, West Side A planner from the Chicago Department of Transportation will present on ideas for improving cycling in the UIC community area, followed by a brainstorming session. Thursday, March 1, 833 South Wood, 11:30am-12:30pm; free.

Tour of Jefferson Park Learn about the history of this leafy Northwest Side neighborhood on this guided bike tour by architecture buff Lee Diamond. Saturday, March 10, 4822 North Long, (773)255-6347, chicagovelo.com, 11am-3pm; $9.