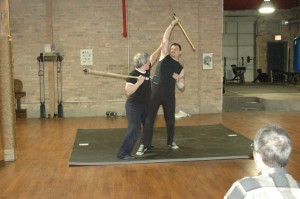 Forteza Fitness has an unassuming entrance set at the back of a small lot, but the recently opened center for physical fitness and traditional European martial arts is not something to be overlooked. The school, founded by Gregory Mele and Keith Jennings, has brought together various forms of unique martial arts to create a school that integrates history with physical training in everything from the use of swords to parasols and canes.

Tony Wolf, a martial arts instructor and fight choreographer for stage and film—he was Cultural Fighting Styles Designer for Peter Jackson’s “Lord of the Rings” trilogy—is currently teaching one of the newest additions to the Chicago martial arts scene: Bartitsu. The discipline has its beginnings in late Victorian London and is a combination of bare-knuckle boxing, Savate, jiu-jitsu and cane-fighting. It is commonly referred to as the “lost fighting art of Sherlock Holmes” due to a reference of the method during the fictional account of Holmes’ showdown with his archenemy Professor Moriarty, but Bartitsu was not a fictional creation. E.W. Barton-Wright developed the self-defense method and taught it at his school, until it closed down for unknown reasons in 1902.

“Mixed martial arts is big now, but Barton-Wright was doing that 110 years ago in London,” says Wolf, adding that even women were encouraged to participate at the Victorian club. “Bartitsu was radically ahead of its time.” 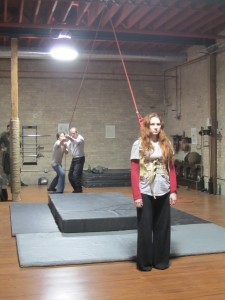 The revival of the Victorian discipline began on an intellectual level in 2002 with The Bartitsu Society, which began as an international email group contributing research and working to translate various texts. “Then five or six years ago, people wanted to revive it on a practical level,” says Wolf. “This is my first time teaching it as an ongoing course.”

Bartitsu was given a nice popularity boost in 2009 with Guy Ritchie’s “Sherlock Holmes,” which Wolf says helped bring Bartitsu “from an esoteric interest to something with a pop-culture call.”

“I’m a fight choreographer myself,” Wolf says, noting that he is very aware of the compromises that have to be made in cinema. When asked about the fight choreography by Richard Ryan for the films, he says“We were blown away with the attention to detail and historical accuracy included.”

The modern revival borrows from the recorded training methods of Barton-Wright and his colleagues, many of which were recorded in magazine articles, photographs and interviews during the turn of the twentieth century. Forteza Fitness, which is based on Barton-Wright’s School, also includes various antique exercise and training equipment, from medicine balls to Indian clubs to rowing machines, all more than a hundred years old and all regularly used during the courses. The brick walls, wooden floors with black mats and exposed ceilings do much to add to the impression of Victorian culture, offering a nice contrast to the often white-walled, modern training facilities elsewhere. They are also currently working on finishing a library and lounge on the second floor to further facilitate the combination of training, education and camaraderie at the studio.

“We are half academic curiosity and half regular martial arts training,” Wolf says of Forteza, adding that while Bartitsu could be taught as self-defense, he doesn’t teach it as such. “I have a burning interest in where the Barton-Wright School would have ended up [had it not shut down]…Where would they have taken it?” 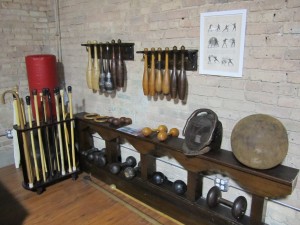 While the programs on Victorian combat and others on the use of longswords, daggers and rapiers may seem to suggest a school heavily focused on the past, Forteza also offers courses in modern knife defense and the MBC Self-defense System, physical training and modern nutritional counseling. Asylum Stunts, a group of stunt professionals (both Screen Actors Guild and non-SAG) for film, commercials and motion capture, also uses the space a few times a week. The group practices mini-trampoline-assisted explosion reactions (explosion not required), rigged pulls in which they are airborne and throwing one another. They master the art of falling correctly (although it looks just as painful and realistic as the real thing). One demonstration from Asylum highlighted the way in which one choreographed fight, with the same points of contact, can be altered by the fighters to appear vastly different by switching from sweeping gestures to concise, short movements or the inclusion of a weapon—they use prop weaponry during the fight, subbing with more realistic items for film close-ups.

While Asylum Stunts may be practicing on thick padded mats on one side of the room, members of The Chicago Swordplay Guild are likely teaching a course on the use of renaissance rapier on the other. The various different avenues of study could easily seem chaotic in the open space, but the in-depth and devoted lessons paired with a congenial attitude of all involved give an impression of collaboration and cohesion that pulls everything together.