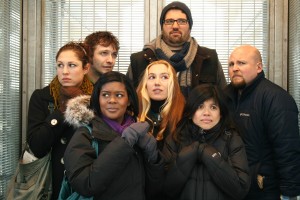 Driving cuts you off from the outside world, but walking, biking and especially public transit encourage interaction with strangers, which can lead to some unforgettable encounters. The performance piece “EL Stories,” based on real tales from CTA commuters recorded by Waltzing Mechanics theater company, capitalizes on this.

“The Chicago ‘L’ is a shared, communal space that hundreds of thousands of people come together and inhabit every day,” says cast member Eleni Pappageorge. “When you bring that many people from that many places into one space a lot can happen. Some of the smallest, most mundane events on the train can make beautiful stories, but you wouldn’t notice them with your iPod on.”

“EL Stories” is the fourth installment of a series, directed by Zack Florent, following “Red Line,” “Brown Line” and “Holiday Train” editions. For their debut the cast collected transit tales mostly from family, friends and colleagues, and for the next two productions cast members paired up and explored areas around Brown and Orange Line stops, buttonholing locals who looked willing to talk about their CTA adventures.

The current show, with a dozen or so tales set all over town, features stories recorded from audience members after previous performances mixed with vignettes gleaned from Chicago’s No Pants Subway Ride, a sort of half-naked commuter flashmob. The set is simply the three-dimensional outline of an ‘L’ car built from plumbers pipe, with wooden chairs taking the place of plastic benches. Scenes are punctuated by prerecorded CTA sounds: randomly selected station names and the unmistakable announcement “[Ding dong] Doors closing.”

I recently came along for the ride and felt transported. The skits adapted from the stories range from side-splitting to stomach-churning to uplifting to terrifying, like the one titled “The Mountain.” As a young couple rides the Brown Line home from the Chicago Half Marathon, a homeless man comes storming through the train cars ranting at passengers, then zones in on the female runner. “I’m going to marry you and take you up on a mountain,” he declares. “Then I’m going to kill you and throw you down the mountain into a lake filled with alligators.” She smiles and calmly tells him she works for a health insurance company. When he reaches into his pocket, the other passengers gasp, assuming he’s going to stab her. Instead he pulls out his Medicaid card.

In “All This French,” a northbound Red Line car is silent until four raucous French women board at Grand Avenue, jabbering loudly en français. One of them exclaims, “Les poissons sont très sexy!” (The fish are very sexy!) and the quartet erupts in laughter. At first the narrator is annoyed. But another man on the train pretends he can understand the conversation and starts chuckling along, and soon the entire train has joined the laugh-in.

“April 4, 1968,” the oldest story, is also the most thought-provoking one. Soon after King’s assassination, Chicago’s West Side is burning. As a white teenager leaves her Loop office job, coworkers warn her to be cautious around black people. When she boards a crowded Brown Line train, the only open seat is next to an elderly African-American lady. The girl hesitates to sit down, but the senior pats the seat and says, “It’s OK honey, everyone’s afraid today.” Recalling the incident, the narrator says, “I can’t tell you what I wore yesterday, but I can remember every detail of that day.”

Near the end of each performance, the company asks an audience member to provide a story to be acted out as it’s told, a technique called “playback theater.” The night I attended, a young man volunteered a tale about seeing a pretty young woman weeping on the O’Hare Line and trying to console her by handing her a pink rubber ball. The girl just started sobbing louder and got off at the next stop. The cast acted out the story word-for-word, with one actor crouching down to portray the plaything.

After the finale, the cast invites the audience to record their own transit tales in the lobby. I attended the show with Danny Resner, with whom I recently set the world’s record for riding the entire ‘L’ system (nine hours, thirty minutes and fifty-nine seconds, in case you’re wondering) and a pantsless actress recorded our travelogue of the trip. If our ‘L’ story is deemed interesting enough, you may be able to see it acted out with a new cast when the show reboots on June 2.

A few days later on the phone, I asked Pappageorge, a car-free commuter who rides the #36 Broadway bus to her downtown day job, if she herself has seen any memorable incidents on the ‘L’. “I had one lovely experience,” she says. One evening on the Brown Line’s Paulina platform she heard loud, tuneless whistling coming from a beefy, older, rough-looking man. A clean-cut college boy approached him and asked, “Was that you whistling? That was a very loud, intense, beautiful whistle.” “I whistled a lot in ‘Nam,” the man replied. “It kept me sane and strong at night when a lot of stuff was going down.” This odd couple had a long, interesting conversation on the train until the boy got off at his stop. The older guy chuckled to himself, “Man, good people. Good people.”

So why should someone who’s a CTA enthusiast but not a theater fan buy a ticket for “EL Stories”? “All CTA commuters can relate to this production,” Pappageorge says. “Everyone’s got their own story of being on the train when some crazy, sad, funny or weird thing happened. When they see this show they’ll feel like they’re a part of the transit riding community.”

The Green Line: Upcoming meetings, rides and other events you need to know about