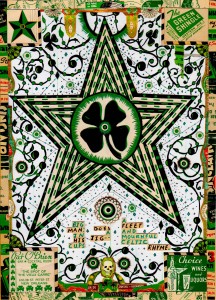 Almost every year in Chicago, it’s the same story on St. Patrick’s Day–a bunch of drunken, green-wearing slap-dicks spilling out of bars all over the city and projectile-vomiting foamy green puke on everything in sight.

There is an impression that the Irish are a bunch of happy-go-lucky dipshits with fake brogues and cheery dispositions. Let us dispense with this myth right now. There is no darker heart than that of the Irish, Boyo.

We gave the world Whitey Bulger, The Westies, Michael Collins and Vincent “Mad Dog” Coll, as well as Owney Madden and Legs Diamond–not a bunch to fuck around and try to ‘high-five’ with. They were all poor kids who had to beat, steal and kill their way to a small piece of the world, and they knew well that the “luck of the Irish” was a myth and the cruelest of jokes.

You don’t want the luck of the Irish. Poverty, famine and the oppression of the British Crown are some of the components of this “luck.” Still, from time to time, our boys managed to get their licks in.

Vincent Coll was an enforcer for both Dutch Schultz and Owney Madden, and both were scared shitless of him. He was the blackest of the “black Irish,” with dark eyes that never blinked. Madden, who owned the Cotton Club and the gambling and policy (numbers racket) in Harlem, once asked Coll what it was like to be able to kill a man without so much as a second thought.

Coll looked at him with those unblinking eyes and said “Boyo, it’s like anythin’ really. A fella must love what he does in order to do it well, and I love my work, and I’d do it even if no one ever tossed me a quid.” It was then that Owney’s fear of Coll began in earnest and, over the next few years, he tried many times to have Coll murdered. It wasn’t Madden, but Dutch Schultz’s gang that finally got Mad Dog Coll… in a phone booth at 23rd and 8th in New York City, but not before Mr. Coll dispatched at least fifty people off of this mortal coil.

The Irish have been conquered, raped and pillaged by the Spaniards, the English and the Vikings. Some “luck.” They still managed to take the language imposed upon them by their conquerors and use it better than they did. The Irish gave us James Joyce, his secretary Samuel Beckett, Brendan Behan and Yeats . We are the best storytellers on the planet. We endured a famine so atrocious almost a quarter of our countrymen perished while the English raided our surviving potato crops. Nothing really grows on our boggy pile of rocks (in the North) except grass and potatoes and some scraggy trees. Our grass is so rich with minerals, we raise the finest thoroughbreds in the world. Book-making is legal in Ireland and damned near everybody is on the dole. The best thing though, is that artists pay no taxes. The place is a knot of contradictions.

We are a combative bunch. We love our mothers and fear God. We revere the water and the fairy tales about Selkies and Jenny Linds. We believe in luck and are eternal optimists in games of chance. My father burned at least ten bucks a day on Lotto tickets and, being a child of the Irish Sweepstakes, always believed he was going to win the big one some day. Three days before he died of skin cancer in 1998, he had me running down to the pharmacy for scratch-offs from the daily game.

We’re full of shit. We’re the biggest braggarts in the world. Ours is the sin of Pride. To this end we produce politicians, especially in my city. Daley, Burke, Hanrahan, Danaher, Touhy, McGann, Dunne, O’Malley, Durbin, Mell, Finley; these are just a few of the names of politicians who hold or recently held office in Chicago, and I could go on. They ain’t Swedes. They are also damn near half of the police force and when I was a kid, they were some brutal motherfuckers. Some of you are probably old enough to remember the warm embrace the hippies got here in 1968; the tender mercies extended to them in Grant Park while the whole world watched. In 1996 I ran into a copper I knew at the ’96 Democratic Convention. He was wearing a T-shirt that read:

The Irish have a ferocious sense of boundaries. Reach for mine? I’ll cut your hand off. It was either Shakespeare or a Chicago Pol that said, “Kiss only the hand you cannot sever.”

Still, somehow we have been burdened with this jolly-asshole reputation.

There is a marvelous, overlooked movie from 1981, “True Confessions.” It stars Robert De Niro and Robert Duvall, as well as a host of brilliant Irish American actors like the late Ed Flanders and Kenneth McMillan, Burgess Meredith and Cyril Cusack, and the great Charles Durning, in what I think is his best screen role, which is saying a lot. The movie is based on the great John Gregory Dunne’s novel of the same name and in it, Durning plays Jack Amsterdam, an avaricious, psychotic, dying gangster who is in cahoots with the Catholic Church. He is the worst kind of hypocrite; a murderer and pimp and corrupter of other men. He is also the worst kind of Irish; sentimental and blustery with cheap not-so-charitable boosterism and racist to the core with a murderous temper.

There is a point in this film, at Durning’s daughter’s wedding, where this awful man finds a moment of grace. The great Durning is standing around glad-handing and shit-talking and all of a sudden, the band starts to play a slow and mournful Irish song. And Durning, who had to go at least 300 pounds at the time and was about five foot nine, starts to dance a traditional Irish jig and he is letter-perfect. Not just “good for a big man”; hell, good for any man. One moment he’s Jabba the Hut, the next as fleet and graceful as a Celtic rhyme. It is a marvelous moment in American movies; a rare moment of beauty from a bad man.

This is the way with us Irish. We contain great beauty; that which history has not been able to take from us, and we wield it with the best and worst intentions. Get in the way of our dance in this life, Boyo, and we’ll knock your dick loose.

3 Comments
Inline Feedbacks
View all comments
“whatever happened to the girl in me” ike reilly | Bark: A Blog of Literature, Culture, and Art

[…] saturday i was doing my level best to avoid all the drunk, fake-irish fucks that were running amok in chicago.  i can’t pretend to understand why the temporary […]

Pretty sure you mean Yeats, rather than Keats! (I’m guessing this is the work of a misguided editor?)

ebj743: Thanks for the catch. We’d like to say that, if Tony says Keats was Irish, we would not argue the point, but the fact is that his non-Irish editors missed it. (BJH)