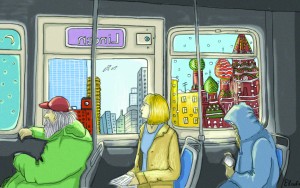 “You don’t know how lonely it gets, waitin’ for El cars…”
Nelson Algren, “The Man with the Golden Arm.”

A woman sitting next to me is painting her nails bright red, spreading a strong smell of nail polish. A girl in a pink sports suit a couple of seats away is listening to rap music, energetically shaking her head and occasionally yelling some words from a song out loud. People read books and newspapers, talk on the phone, knit, pray, ask for money, drink, eat, chatter in English, Spanish, Russian, French, Chinese, Hindi, Urdu, German, Polish. Every morning I take an elevated train, Purple Line Express, from Evanston to downtown, every evening I return home on Purple or Red.

When I lived in Moscow I traveled by subway a lot. It is pompously and elaborately decorated, large, magnificent, overpowering. It feels like a palace after the revolution, the proletarian masses trampling over colorful mosaics, bustling past the delicate bas-reliefs. Chicago’s elevated train, or simply L, is ascetic in comparison, as functional as scaffolding. L’s decorations are the things you can see from the windows. Its wagons sometimes come so close to the windows of the buildings nearby that you can look into rooms as well as balconies, seeing barbecues and beds, lamps on long wooden stems and large TVs. Once I saw a man staring out of the open window, an old, bold man in his pajamas. I looked at him and he looked back at me. It lasted for just a second, then I was gone, and he stayed there, smoking his cigarette, waiting for the next train to come.

I like to sit in the first cabin, and eventually I start to recognize some of my fellow passengers. One middle-aged man with shoulder-length blond hair gets into the train on Fullerton and exits at Merchandise Mart. He wears jeans, looks like a retired rock-star, and has a habit of loudly stamping his foot in time with the music he is listening to on his iPod. “Tap-tap-tap-tap,”—the noise is annoying and I start staring at the guy’s forehead with focused intensity, but he just smiles vaguely and never stops. Maybe he thinks I look at him with such passion because I like him. There is also an older woman who looks like a university professor, with her frazzled gray hair and tweed jacket. She always eats her breakfast on the train: coffee from a thermos and a blueberry scone. In Russia people rarely eat in the subway, but they often drink. During the evening rush hours the trains fill with men coming back from work; almost every one carries a bottle of beer in his hand, taking a sip from time to time.

I am waiting for my train at the Howard station, when I hear a strange noise. I look to the right, and see an older man with white hair who is banging his head against a metal post. “Bang, bang, bang,”—his head is beating the post methodically, in a strange, monotonous rhythm. No one takes any notice of him. Soon the train comes and I get in, looking back at the old man and wondering if he is mad or just unhappy. Chicago reminds me of Moscow in the way people ignore each other. Once I was taking a train in Moscow, when a person in a banana costume entered our train car. No one even looked in his direction, each person deeply immersed in a book, beer or thoughts. This indifference can be scary. Once in the subway in St. Petersburg a man was beaten up by skinheads. Throughout the beating the people turned their heads to look away, as though nothing at all were happening.

I am a compulsive reader, and I always carry a book with me to read on the train. When there are no books, I read the advertising spread all over the walls of the wagon. “Are symptoms of schizophrenia interfering with your life?” asks one, making me wonder what those symptoms are and whether I should start worrying. “Tired of bedbugs?” inquires another, picturing giant orange monsters crawling out of a mattress. I feel that I start scratching my hands involuntarily. Others question whether I may be suffering from a foot ulcer, acne, diarrhea or migraines. They offer me cash loans, cooking courses, legal immigration services and even cheap funerals.

Like many of my compatriots, I grew up reading classic Russian literature; voluminous novels exploring the darker sides of human psychology by Dostoyevsky, Sologub and Gogol. On the Chicago L the very essence of human misery fits into one-sentence advertising slogans.

I take the L every day because I have to get from point “a” to point “b.” But I have come to enjoy the feeling of loneliness in the crowd that it gives me. I am an isolated witness of its daily drama and mundane routine, standing apart but somehow connected internally. People drink and eat, talk, yawn, paint their nails and beg for money. They  brush their hair and pray to their gods. Traveling slowly along the rails, sometimes with delays, the trains are always moving forward, coming inevitably to the stop where you have to get off.