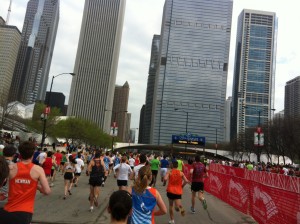 Reaching its 40, 000 registrant capacity nearly a month before race day, the Bank of America Shamrock Shuffle 8K (now in its 33rd year) is clearly a huge draw for Chicago-area runners. Often viewed as the kickoff to Chicago’s running season, the Shuffle has seen a wide range of weather on event day, from snow to sleet to rain. But the 34,000-plus runners that finished this year enjoyed one of the most picturesque running days imaginable, with temperatures starting in the forties and ending in the low sixties.

Additionally, the decision to break the large crowd into two separate waves (with the first starting at 8:30am and the second at 9:15am) proved to be a wise one, alleviating some of the clustering at the starting line (and throughout the course) that typically results from such a large field.

The result was a more open field on an exceptional course; much of it follows small sections of the Chicago Marathon course, and at times there are enough cheering supporters that you can feel like maybe you are running a marathon. The relatively flat course finishes on a tough turn up the hill (we can call it that in Chicago, right?) at Roosevelt and Michigan that doesn’t quite break your heart but at least cracks it a little. But this well-placed challenge (also used in the marathon) ultimately serves to make the finish sweeter.

Getting to and from the race is a serious undertaking; those who can walk or take public transportation likely have no complaints, but anyone driving should reconsider, as traffic is pretty slow-moving given the mass of people walking in the area mixed with the street closures for the course. Getting to and from the impressive expo at Navy Pier (this has to be the biggest expo for a race this size) is a similar story. (Zach Freeman)

Course: 5. Basically like getting a taste of the marathon course (cheering fans and all)!
Organization (bag check, etc.): 5. Packet pick-up is automated and straightforward as is the bag check. Refreshments along the course and after the finish line were handled perfectly.
Goody Bag (includes shirt): 4. Nice design on the shirt (I did hear a few questions about the choice of red for the color, though) and a great mix of treats and coupons in the bag.
Weather: 5. Absolutely perfect running weather (future Shufflers should hope to be this lucky!)
Overall: 4.75. Recommended Race. This is a popular, enjoyable, well-run race that any Chicago runner should try out at least once.