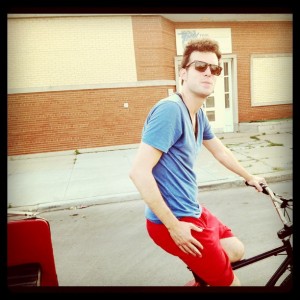 There’s a weight beneath your knees, an unimaginably heavy force that you’re trying to push down. The sun is beating on the back of your neck. You’re standing and your shirt is plastered to your skin in sweat. You have two rubber bars for grips. Cars pelt by, passing on the left without so much as a word or honk. And what makes this nightmare real is that, with great effort, you can move this force. The force can only be moved by a pair of pedals. The weight is your fare, a man and a woman, wailing encouragement and laughing hysterically.

People talk about the adventure, the freedom, the exercise, the outdoors—I just wanted a job. I graduated last spring with a degree in fiction writing, which is about as promising as it sounds. I could have begged my way into a dismal job market, but I opted instead to take up pedicabbing—bike rickshawing.

If you were out of doors last summer chances are you’ve seen one—little side-masted carts that come in all colors and sizes, sitting outside of Wrigley Field, the NKOTBSB concert you “took your girlfriend to,” Nordstrom, Lollapalooza.

Despite the Hong Kong, high-waisted empire associations, it’s really not so menial—because you’re the one who chose to sweat it. “I’m so glad you’re doing this,” I had a passenger tell me on her way to a dinner on Rush Street. “And not a horse. Those poor creatures have no choice, no idea what they’ve been put up to.”

You might picture a ride in a bike-drawn hansom, with vinyl cover and patent-leather seats. The cabbie wearing a silk top hat and slacks, lighting two little lanterns when night falls. Actually the definition is so vague that anything people sit on pulled by a bike could be deemed “a pedicab.” Some of the independent cabbers harness their mountain bike to a steel frame with a couch sitting on it. You see all manner of interpretation: soundsystems, Christmas lights—one idiot had chains and whips. As for the outfit, it’s a good idea to wear as little as legal; shirtless, with shorts short enough to showcase your quads; twin-engines glistening defiantly in the August sun. But I never went shirtless because who wants to ride behind a hairy, sweaty back for fifteen minutes?

I had friends who had been cabbing for years and their stories of three-wheeled glory were too alluring to ignore. They didn’t lie—I just didn’t know what to expect. There are some things you have to endure: the occasional ass-pinch, the soused Cubs fan who uses you as a roving soapbox and the ones who get where they’re going only to “discover” they have no cash. But then there are also the good times: getting paid in beer, cigarettes and kisses, being offered regular discounts at businesses. I was even invited up to a bachelorette party and quite a few residences on ordinary nights. I must be in twenty-seven Facebook albums without a tag. The real trick is to turn these down and insist on the one thing that pays rent.

You have to make conversation, even if it is a bit breathless, to make tips. Because the token thrill of being ferried about town by human labor in an open bike sometimes just isn’t enough. Usually, people love it. Every ride, within a few seconds of getting moving, they’ll say something like “Oh, this is so nice.” Or, “I’m so glad we didn’t take a cab.”

The first few days I came home feeling pleasantly close to death. My heart felt as though it might give out—like burned rubber—hours after. But it kept dragging me back. I’ll spare you the pity stories—again, you do it because you choose to! About two weeks into my career (for lack of a better word) was the ninety-nine-degree day in July—the hottest in Chicago for six years. The heat advisory explained it this way, “Stay indoors,” which I took as “It’s probably a good idea to ride a bike towing a few hundred pounds.” I rolled up to the rental garage already saturated in sweat. My boss was there working with a trainee on the maneuverability course. “Look out,” he said, stepping back a little to let me pass. “This guy’s going out today and I don’t know why.”

Stopping for a gallon jug of water at CVS wasn’t a matter of preference, as much as it was survival. It was one of those rare days that was so balmy no one wanted to watch baseball, much less sit on a sun-warmed leather seat as they were being carted off from the game. I had one fare between pregame and the seventh inning for a total of fifteen dollars. I sat near the rear gate of the stadium collapsed in the seat of my own cab—dehydrated despair—when a young, not unattractive woman emerged from the rooftop seats wanting a ride to 11th and Michigan. “Look Lady,” I wanted to tell her in a Humphrey Bogart voice, but she said, “I’ll give you two hundred dollars,” before I could get it out, putting the two bills in my hand.

I could not have known how long Clark Street was before that day. Yea, were it not for that gallon jug of water underneath my seat, I might not have been able to see the length of that historic byway. As the jug was under the passenger’s seat, it forced a strange relationship between us wherein my passenger would ask at each stoplight, “Would you like some water, cabbie,” and breathless, I would squeal, “Yes, yes please,” as she poured it down my throat. For most of the ride she lounged about, making idle talk about how nice it was to be outside. “I love pedicabs. I think this is the only way people should travel,” she said. “I wish I had one all the time.” I considered it. Being a chauffeur would mean a salary—what does it matter who you deal with then?

We exchanged as many words as I could manage. She turned out to be the co-owner of a famous breakfast chain in Chicago. We rolled along, past the Century Shopping Centre, the Lincoln Park Zoo, the Chicago History Museum, the summer throngs of beach-goers and children pausing to gawk every now and then. The street was narrow enough in most places that she had some shade from nearby buildings while I toiled away, looking back only for the occasional guzzle. I knew when I had pedaled half the distance I was going to be able to do it. There comes a time in his life when a man questions the content of his character and looking inwards decides either he is heroic in quality—capable of carving great things out of nature—or a worthless worm, crawling the earth in search of a rock. I was mostly on the fence at this point.

When we got to about the Rainforest Cafe my fare decided she didn’t want to go to 11th and Michigan anymore, she wanted to pick up her date for dinner. Feeling the raw ache in my bones, I wizened up—there was no way I was taking this fare—especially not without the additional fifty she handed me then and there, about a dollar for every five pounds this particular gentleman had in muscle. The last image I have of this trip is standing, barely pounding pedals in a laughably low gear, the sun on my back as I impelled these two up the Columbus Drive bridge. (Here you stop me: “The Columbus Drive Bridge is not a hill! How can you say ‘up’ the Columbus Drive Bridge,” and I commend you for having an exquisite knowledge of this city’s roads. By all appearances, the bridge is flat. However, if one stands on Illinois Street, say outside of Lucky Strike Lanes, it is possible to perceive a small but steady incline that becomes considerably steeper when you’re tugging four hundred pounds of human flesh.) And though I occupied a lane of traffic where there should never be bikes, not a car honked, all passed silently on the left—either out of pity or frustration.

That was my last fare of the day. Seven-and-a-half miles all told. I pushed my cab into Grant Park, underneath the tree with the most generous shade and reposed in the back, feet propped up on the bike seat, until I could find the vitality to haul the thing back to the garage. I fell in and out of consciousness watching the branches reel in a slight breeze; the water jug snuggled to my side, when I heard a voice from behind, “A little hot for that today, isn’t it?” A middle-aged man in shirtsleeves was passing by, probably on lunch break, a wry smile curling like I was about to become the subject of a joke. “I just came from Wrigley Field,” I said. The irony faded from his expression, “Oh my God!” I began spouting off the details in as much as I could manage, but he had already walked away.

You learn quickly in this industry the importance of being choosy. A rider may pay well, but are they worth the time and effort? You can’t be refilled with gasoline. You go until you can’t. Then you wake up the next morning, a sunburned cripple, and do it over again. Or not. The beauty is you can choose. People ask if I’ll do it again this year.  Guess it depends whether I’m salaried. Then, it’s hard to tell if that woman was being serious. Surely, anyone who can drop $250 on a one-way ride could be. But then who insists on being carted about town by human labor—“I wish I had one all the time”?