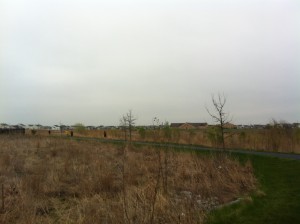 For an inaugural race (and the self-proclaimed first 10K to be held in the city of Plainfield) the Fast Cat got a lot of things right, perhaps because it was organized by (and for) a group that knows running well: the Plainfield North High School Boys Track and Field team.

First off, the race options went beyond the typical 5K and 10K to include a 10K relay (called the 2X5K relay) where two team members split the 10K and each run a leg of it. Though this probably led to the slightly disappointing decision of having the 10K course be simply a double loop of the 5K course, it also made for an interesting spin on the 10K (and a more involved run for participants that may not want to invest in a full 10K).

Starting and finishing at the spacious entryway to the Plainfield North High School, the course included sections of residential suburbia and well-manicured, paved running trails, all the while delivering on the promise of a “flat course.” The weather was slightly chillier than expected (more in line with a typical March morning than we’ve grown accustomed to this year) but the friendly community vibe from the runners and organizers alike helped to warm things up; aside from the official water station (passed around miles two and five) at one point there was even a local resident handing out bottles of Gatorade outside her house.

Rather than being chip-timed, speeds were calculated by hand, which caused a delay in reporting the results, but free pizza and beverages, along with a lengthy raffle with impressive prizes, kept the 400 or so participants hanging around to await the announcements. Above all, the declaration that the money raised from this race amounted to more than the track team had raised in the last three years combined was gratifying. Race organizers predicted that participation would double for next year’s event, and based on the success of this first running, that seems like a valid conjecture. (Zach Freeman)

Course: 4. Well-marked route through quiet suburban neighborhoods and cultured running paths. Minus one point for the 10K course being a double loop of the 5K course.
Organization (bag check, etc.): 3. Quick and easy packet pick-up, though they briefly ran out of some shirt sizes before the race (they had them ready to go afterwards). Recording times by hand delayed results.
Goodie Bag (includes shirt): 4. Quality black shirt with excellent logo design. Surprisingly nice bag for such a small race: fancy koozie, free sandwich coupon and other discounts and flyers.
Weather: 3. A little on the chilly side (low forties) but not too windy.
Overall: 3.5. Recommended Race. Great sponsors and a friendly, flat, well-marked course combined with impressive freebies, prizes and raffles made this inaugural event a success.