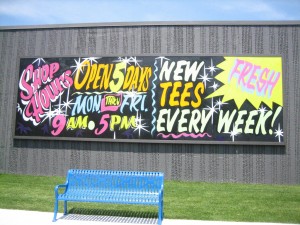 Chicago’s Madison Street, named for one of the chief authors of the United States Constitution, runs through some of the most expensive real estate in town as well as some of the most underserved neighborhoods. As the city’s north-south bifurcating street, it forms the Mason-Dixon Line between the North Side and the South Side. Over the years I’ve hiked the entire length of several Chicago thoroughfares in search of fascinating sights and interesting people, so it was only a matter of time until I walked Madison, a relatively short street at eight miles, but one that’s dense with landmarks.

On a warm spring morning I start my walk in Millennium Park, where Madison T-bones into Michigan Avenue, 100 East Sunshine gleams off the Bean as I gaze past the historic high-rises of the Michigan Avenue cliff into the Madison Street canyon, then step off the curb and stride toward Jeweler’s Row. After passing the State Street intersection, Chicago’s Ground Zero, I cross the river by the grandiose Civic Opera House. Soon I come to Claes Oldenburg’s “Batcolumn,” 600 West, a 101-foot-tall Louisville Slugger made of gray steel latticework, symbolizing Chicago’s “ambition and vigor.” 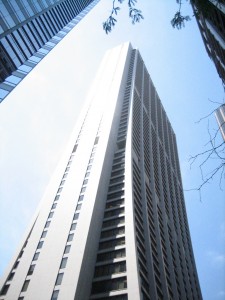 Crossing the Kennedy Expressway, 730 West. I’m in the trendy West Loop and fancy condo buildings with balconies are plentiful. I admire gleaming stainless-steel pots and pans in the window of Herzog Restaurant Fixtures, 1034 West Madison, a holdover from this area’s origins as a restaurant supply district. The Beer Bistro, 1061 West, features a beautiful mahogany back bar and looks like a nice place to hoist a few pints of craft brew.

Inside Johnny’s IceHouse, 1350 West, a year-round hockey facility, teens are practicing their slapshots. After snapping a photo of the classic neon sign at the Palace Grill diner, 1408 West, in business since 1938, a few blocks later I come to the United Center, but the Michael Jordan statue is fenced off. Instead I check out “Badge of Honor,” a newer sculpture featuring rough-and-ready Blackhawks players. “Each player represents the pride, the passion and the emotion of the different eras,” a plaque declares.

West of the stadium, as I enter the Garfield Park community, the surroundings grow more desolate, with boarded-up buildings and weed-strewn vacant lots. It’s an enduring legacy of the civil unrest that erupted after the 1968 Dr. Martin Luther King, Jr. assassination, when over a hundred buildings burned, and Mayor Richard J. Daley gave his infamous orders to shoot-to-kill arsonists and shoot-to-maim looters. I detour a block south to a house at 2337 West Monroe, where a year later the Chicago Police gunned down young community organizer and Black Panther Fred Hampton as he slept. His photo hangs in a second-story window.

Just west, I stop for a corned beef on rye at Moon’s, 16 South Western, a no-frills sandwich shop that’s been around since 1933. Continuing on Madison, under a railroad viaduct, I encounter a woman who’s doubled over, either vomiting or stretching, and ask if she’s okay. She lifts her head to show a haggard face. “Yes,” she says calmly. “Why, thank you so much,” but as I walk away she yells after me. There’s a huge mural of Hampton by Dasic Fernandez on the side of a building at 2746 West, across from Wallace’s Catfish Corner, 2800 West, which hosts summertime blues concerts in its parking lot. 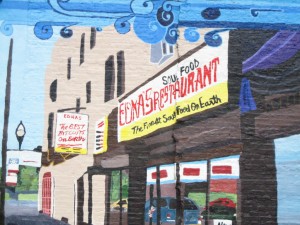 A few blocks later I come to Ruby’s, formerly Edna’s, 3175 West, a soul food restaurant where King held meetings during his 1966 campaign for fair housing in Chicago. At a nearby housing complex named for the civil rights leader, 3222 West, Geraldine McCullough’s Afrocentric bronze sculpture “Our King” depicts him as a Benin chieftain. I soon arrive at Garfield Park where the gold dome of the field house peeks out through the trees and a man has set up an ad hoc barbershop on the grass, running an extension cord from across the street to broadcast R&B.

Near Pulaski Street, there’s a bustling retail strip sometimes called the “Downtown of the West Side” where stores sell sneakers, athletic wear and other hip-hop gear. I ask owner “Big Mike” Taylor, hanging outside GQ Sports, 3919 West, why this district is so popular. “It’s all in the area,” he explains. “It’s convenient for people. Instead of going all the way out to the big malls they can shop in their community.”

Out of the Past Records, 4407 West, offers stacks and stacks of used blues, jazz, soul, disco, house and rap LPs, CDs, cassettes and even 8-track tapes. Owner Charlie Joe Henderson opened at this address in 1986 after a fire destroyed a previous location. He has vivid memories of the ’68 riots. “The day King got killed people were just milling around the street, not buying anything,” he says. “The white business owners shut down their stores and left. Later that night the whole West Side was on fire.” He recalls seeing a policeman stationed on the corner with a shotgun, trembling.

In the Austin neighborhood I see lots of people relaxing in chairs on the sidewalk in the afternoon sun, although the concrete is strewn with broken glass. When I pass by the Peace Corner Youth Center, 5022 West, assistant director Duane Wilson invites me inside and explains that the center was established to provide young people with a safe haven from gangs, drugs, crime and violence. Here they can get help with their homework, take computer classes and attend life-skills workshops and job-training programs. 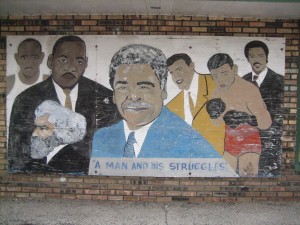 As I continue down the street with my shaved head and shades, a little boy eating an ice-cream cone in a doorway asks, “Are you a white person?” as if he doesn’t have much experience with them. At Central, 5600 West, I turn around and gaze eastward and see that, almost seven miles away, the Sears Tower is still clearly visible. A mural on the wall of Illinois Vehicle Insurance, 5801 West, titled “A Man and His Struggle” features folksy portraits of Frederick Douglass, King, Muhammad Ali, Harold Washington and Jesse Jackson.

Crossing Austin Avenue, 6000 West, I leave the low-income, African-American Austin community and enter wealthier, mostly white Oak Park. Prairie School-inspired obelisks in Madison’s median pay tribute to Frank Lloyd Wright, who along with Ernest Hemingway was one of this suburb’s most famous residents. The novelist dismissed this as a town of “wide lawns and narrow minds.” But my pilgrimage, from the glittering Loop to the struggling West Side, has been a mind-expanding journey indeed.

Beer and Bikes Tour This ride starts at “Brew Camp” for a lesson on the brewing process and tasting tips, then hits a few beer-centric checkpoints over a ten-mile route, ending with a tasting at 4 Paws Brewing. Saturday, April 7, 2039 West Belle Plaine, goteampete.com, 10am-3pm; $20.