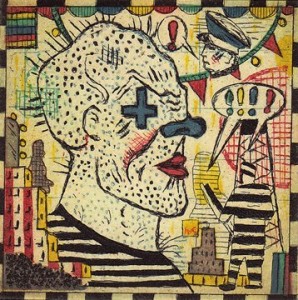 “There is nothing one man will not do to another.”–Carolyn Forché, “The Visitor”


There are men who are walking proof of evolution. Those whose knuckles hover, just barely, over the ground. The guys heavy of brow that radiate “Cro-Magnon.” Men with short legs and long-muscled bodies like primates, like apes.

There are men who possess a genius contained in their physicality. W.C. Fields comes to mind, light on his feet, a fleet and brilliant physical comic, despite (or because of) his size. Almost certainly Marcel Marceau, Roberto Benigni, Muhammad Ali, and Crazy Frank Gleason—no relation to Jackie.

Frankie was a leg-breaker, an enforcer, a man who’d forgotten more about dispensing pain than you will ever know. He worked for bookies, bar owners, disgruntled husbands, wives, lovers; anyone who needed their fellow man tuned up and taught a lesson. Anyone who had a few hundred bucks.

There were ominous stories: “Frankie t’rew a guy off a ten-story building to see if he would bounce.”

“Frankie walked a guy into a propeller in Mexico.” La-la-la-la-la.

We knew some of these to be bullshit.

Then there were the stories that were true: “Frankie broke Ricky’s arm from the elbow–BACK.”

I knew that story to be true because I watched it happen. Ricky owed a bookie and when Frankie went to collect, Ricky decided to condescend to him, telling him he’d go get the currency, if Frankie could spell the word “currency” for him. I believe Frank’s last words to Ricky were, “Can you spell broken fuckin’ arm, asshole?”

Frankie ended the lesson with a vicious kick in the ribs.

Frank was illiterate. When he cashed his checks at the bars, he just made an ‘X’ on the back. Nobody didn’t cash Frankie’s checks.

When he wasn’t doing his fellow man grievous bodily harm, Frank worked muscle jobs. Construction labor, concert security and, once in a while, moving trucks and landscaping jobs. He wasn’t allowed to drive so very often he rode a three-wheeler bike around. He drank a lot and did whatever drugs were offered him.

Frank’s biography is weird and patchy. He grew up around Villa Park and was in and out of juvie and foster homes his whole youth. He would say his mother gave him up for adoption because she was poor, but others said she abandoned him. But Frank kept finding his mother, trying to re-establish something of a relationship. I once did a portrait of him wearing a white tux and a fedora (“Like Sinatra”) and this forever cemented our friendship. This made me feel better, because there have only ever been two things on this planet that genuinely scared me—and Frankie was both of them.

When I tended bar at Brennan’s, Frankie would come in and have a beer or two and then fall asleep with his head on his folded arms on the bar. Me and a guy named Donnie Wright would flip coins to see who had to wake his ass up. When one woke Frank, he would come up swinging. He knocked one of our doormen out one night.

There was a bar owner named Jimmy in Villa Park who ran the bookmaking around town. Frankie did his collections. If a guy hadn’t squared his Monday night football debts by Wednesday, he got a visit from Frank. Often Jimmy would send someone to drive Frankie and “make sure he don’t get stupid and go too far.” One time, I was the driver. I was perplexed as to what Jimmy thought I could do to stop Frankie. I soon found out. Nothing.

We had been dispatched to a house in Oak Brook Terrace. The guy was a big-deal car dealer who was also a degenerate gambler, putting money on football, basketball, ponies, how far you could piss. You name it, he bet on it.

He owed Jimmy three grand. Because he was wealthy, he thought he could shine Jimmy on and roll his debt into his next week’s wagers. The presence of Frank should have told him he enjoyed no such grace, but he had to be a hard-on. He told Frankie to go around the side of the house and wash himself with the hose because he smelled.

Frank grabbed him by his hair and kneed him in the face. The guy’s nose went like a cherry tomato, then Frankie dragged him across his own living room and found a bathroom, where he commenced stuffing the guy’s head down the commode. I was guessing that this was the point Jimmy would have wanted me to make sure Frankie didn’t “go too far.” In fact, we were way past that point. I touched Frank’s back and said, “Hey calm down, Frank” to which he told me to fuck off and that this asshole was going to pay or drown. When Frank lifted his head out of the water, he promised immediate payment in no uncertain terms. He had shit himself and was bleeding out of his ears. I wanted to throw up, but instead I just walked outside.

After the guy paid, Frankie grabbed him by the hair again and said, “When you lose, you pay, asshole. Those are the rules.”

Frank then suggested he go around to the side of the house and clean the shit off of himself with the garden hose. I couldn’t help it. I laughed my ass off when he said that.

I lost touch with Frank after that. I never worked for Jimmy again and have tried hard to forget that day. On rare occasions, though, I ran into Frank. It seemed like he’d shrunk. He’d had two strokes, which left him even slower of speech. He never did move down to Florida to live with his mother.

But back when Frankie was flush and I drew him, he insisted I take fifty bucks I badly needed. It is still one of the nicest things anyone has ever done for me.

I found his obit the other day. A friend on Facebook ran it down for me. It damn near only said he was born and forty-nine years later, he died. Newsprint had rendered him into one of the unknowable. Well, I knew him and oddly enough, I liked him. He wasn’t a good man but I believe he wasn’t a bad man. He was a tragedy. He never stood a chance and was never blessed. He’d spoken his own epitaph a long time ago.