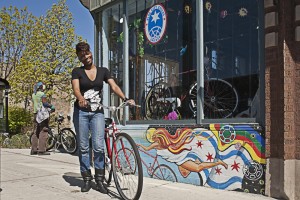 All Chicagoans should have a chance to reap the benefits of urban cycling: cheap, convenient transportation, improved physical and mental health and good times with friends and family. The proliferation of nonprofit bicycle shops and youth education programs, along with the rising popularity of fixies among inner-city teens, is starting to broaden the demographics of cycling here. But the local bike scene still doesn’t reflect our city’s ethnic and economic diversity. Eboni Senai Hawkins wants to change that. The thirty-four year old recently launched the Chicago chapter of Red Bike and Green, a nationwide group that promotes bicycling in the black community.

Raised in New York City, Hawkins first experienced transportation cycling as a teen after she won a scholarship for a study-abroad program in southeast Thailand, doing volunteer work with Laotian and Hmong refugees. “There were no phones and biking was the main way to get around,” she says. “If you wanted to talk to someone you had to bike to their house in heavy traffic.” Her interest revived when she moved to the bike-crazy Bay Area seven years ago for art school.

In Oakland, a multiethnic East Bay city with a large African-American population, she began riding with Red Bike and Green (RBG), named in honor of the tricolor Black Liberation Flag. Jenna Burton founded the group there in 2007 with the goal of creating a “relevant and sustainable” black bike culture. “She’s kind of the momma of it all,” says Hawkins. Burton drafted a “3 Point Plan” outlining the power of cycling to address some of the challenges facing African Americans: health problems caused by lack of exercise and access to nutritious food, economic hardships and exposure to air pollution due to environmental racism.

In addition to monthly cruises for families with kids, RBG organizes First Friday rides to Oakland Art Murmur, a gallery open house which takes place on a street that’s been closed to car traffic. “It’s a predominantly white art walk, very much the clash of the hipsters,” says Hawkins. “There’s that whole conversation about who’s allowed to be in public space. So riding through Art Murmur is a way for RBG to be visible and show unity within the African-American community.” The rides currently draw dozens of participants, mostly young adults in their twenties and thirties, and the group now has branches in New York City and Atlanta as well.

Hawkins moved to Chicago last year for an internship at the Museum of Contemporary Art, drawn to the city’s growing sustainability movement, but she missed the camaraderie she’d felt with other cyclists of color in Oakland. “I really wanted to bring my Bay Area community here and feel connected to them while forging connections here as well,” she says. In October she partnered with the Major Taylor Cycling Club, a mostly middle-aged group that organizes South Side road rides, launching the local RBG chapter with a two-wheeled tour of Hyde Park and Bronzeville that highlighted black-owned businesses and historical sites. 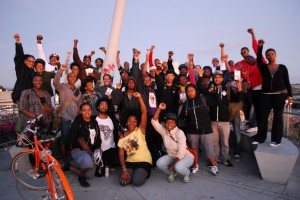 On Saturday, Hawkins is ushering in the warm-weather biking season with a leisurely, ten-mile tour of African-American landmarks on the Near South and Near West sides. This summer she plans to organize monthly rides and collaborate with other African-American bike groups like The Pioneers, a South Side club that does social rides, and she also wants to promote urban agriculture with bike tours that visit community gardens in black neighborhoods. “I feel like there’s a lot of ‘silos’ right now and I hope that RBG can be a connector between those silos,” she says.

Hawkins acknowledges that pushing pedaling in Chicago’s African American community will be more challenging than it was in Oakland, a much smaller city where cycling was already a fairly mainstream form of transportation. “The bike community here seems to be very neighborhood-driven,” she says. “From what I’ve seen of the South Side, bikes are really just for recreation and not for running short errands or getting to other places. Things are so spread out that convincing someone to choose a bike over a car is going to be really hard.”

“In the Bay Area there was such a culture around it,” she adds. “I would ride my bike to the club and no one would think anything of it. You have your toe clips and you have your heels on, you bike to the club, you lock up your bike and you go. I haven’t tried that here yet but I hope to this summer and be more of an example that way.” 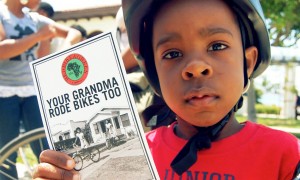 The idea behind RBG is to build the African-American bike community, but what’s the policy if other folks want to come along for the ride? “In the Bay Area, where there’s such a culture of inclusiveness, there has been a lot of misunderstanding of what the rides are and who they’re supposed to support,” she says. “In Chicago I haven’t encountered that misunderstanding. People get it. From a visual perspective, I do think it’s important for neighborhoods that are predominantly African-American to see a critical mass of African Americans on bikes. But if somebody wants to join the ride and they understand that this is a group to promote health, economic vitality and environmental awareness in the black community, and they want to support those goals, hey that’s fine.”

In fact, Hawkins also wants to organize multiethnic events in Chicago, bringing together cyclists from various backgrounds in a city that’s still heavily segregated. For example, she currently lives in the largely Puerto Rican Humboldt Park neighborhood and is interested in staging a joint ride between RBG and local bike education center West Town Bikes as a show of solidarity. “In Oakland it was so multicultural there was a need to establish an African-American identity,” she says. “Here it’s kind of the reverse. There isn’t always that multicultural element to the bike community so there’s a need to unite people through cycling.”

Chicago South Side by “L” This train excursion traces the development of several South Side neighborhoods, including Bronzeville, Chinatown and the South Loop. Saturday April 14, Chicago Architecture Foundation, 224 South Michigan, architecture.org, 9:30am; $20.

[…] is ably represented by Eboni Hawkins, founder of the local chapter of Red Bike and Green, a national organization which promotes cycling […]