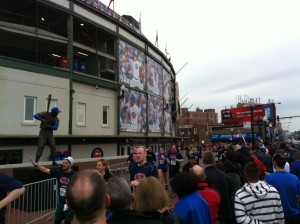 A crowd is gathering outside Wrigley Field this Saturday morning. And for once none of them are drunk. In fact, the hardest thing they’re drinking is some poorly mixed Gatorade from concentrate (more water per powdered cup next time, race organizers). It’s an overcast morning, with the temperature (and the percentage chance of rain) hovering in the mid fifties; in other words, perfect running weather for the 7th Annual Race to Wrigley 5K. Addison Street is quickly filling up with chip-timed runners being especially cognizant of their proper pace group (those just out for the fun run are corralling separately down Clark).

After a surprisingly poignant rendition of the national anthem (for a 5K), radio personality Eric Ferguson says a few words of encouragement before announcing that Samwise Gamgee himself (Sean Astin) is participating in the race as well. Astin steps up to say a few brief words about the Cubs before wishing everyone good luck and joining the pack (estimated to be over 8,000 strong).

The countdown commences and soon we’re all sprinting down Addison, which is giving off a quaint suburban vibe on this quiet morning. The only sound is the slap of running shoes on pavement (and bare feet, in the case of one runner who seems to think even Vibrams are going too far). There’s a right turn at Hermitage and a second at Irving Park. Volunteers are passing out water almost exactly at the halfway point. A quick turnaround at Wunder’s Cemetery turns runners west again before we turn on Clark for the homestretch. All these closed roadways are impressive.

The climactic run through Wrigley Field is really a run through the Wrigley Field ground-level concourse, but it’s still an exciting inclusion in the course (and it’s not like there’s an easy way to let us run onto the field from here). Exiting the stadium and turning toward the finish line puts runners in front of a surprisingly large group of supporters. It’s a pretty straightforward race with a straightforward course—the fact that this is all executed in this popular location is what makes it a memorable run. (Zach Freeman)

Course: 5. A nice almost-rectangle of blocked-off streets bordered by Addison, Hermitage, Irving Park and Clark, finishing with a brief run through the Wrigley Field concourse. Thanks are given to various aldermen before the race—clearly strings are pulled to get this course approved.
Organization (bag check, etc.): 5. Packet pick-up was a breeze at the Sports Authority near Belmont. Race day organization had an air of simplicity, which means these folks were prepared.
Goodie Bag (includes shirt): 3. Great shirt. Nice design, nice color and excellent quality. But not much else to speak of…
Weather: 5. Mid-fifties, overcast, with a slight breeze. Come on.
Overall: 4.5. Recommended Race. An iconic location, a touch of celebrity at the starting line, perfect weather and a wide, well-coordinated course.