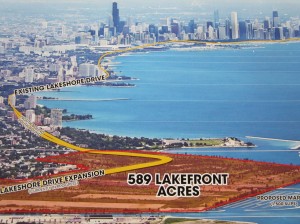 Earlier this month Mayor Emanuel held a press conference at the former U.S. Steel South Works (USX) site, a weed-strewn piece of vacant land bigger than the central Loop bulging into Lake Michigan from 79th to 92nd. He was there to herald the construction of a new $21 million, four-lane boulevard that will run two miles through the site, intended as the future main street of the proposed Chicago Lakeside Development.

Real estate developer McCaffery Interests hopes to build this upscale community with roughly 13,575 housing units, 17.5 million square feet of retail and a 1,500-boat marina on the 589-acre site over the next few decades. “This [roadway] effort is part of a push to connect a forgotten, landlocked section of the Southeast Side of Chicago to the rest of the city, increasing its economic value,” Emanuel said. “What was once an eyesore will become an economic engine.”

In a press release, McCaffrey bills the new boulevard as “Lake Shore Drive’s two-mile extension,” a phrase that raised my eyebrows since the eight-lane superhighway actually ends two miles northwest of the USX site. In reality, the roadway project simply involves relocating U.S. Route 41, a signed highway that winds 2,000 miles from Miami to the northern tip of Michigan’s Upper Peninsula. The route does include Lake Shore Drive, but south of the freeway it currently zigzags on smaller surface roads on the way to Indiana. After the boulevard opens to traffic later this year, Route 41 will be moved to the four-lane, simplifying navigation and adding capacity. 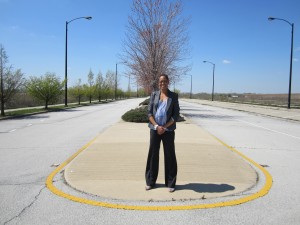 Is calling the new roadway a Lake Shore Drive extension just a marketing strategy, implying that future Lakeside residents would be able to zoom all the way up to the Loop on a high-speed freeway? “Not really, because if you follow the route from the drive and then on streets down to the site you’ll see signs for U.S. 41 the whole way,” argues Lakeside project manager Nasutsa Mabwa. But she concedes, “We’re calling it that for our project because we need it to be identified with the larger boulevard.”

McCaffery hopes the improved access will encourage retailers to open on the USX site, paving the way for the future housing development. “We’ve had interest from grocers and big box stores,” says Mabwa. “But they’ve all asked us the same question, ‘We’re ready to go, we like your project, when’s the road going in?’”

The developer is promoting Lakeside as a high-tech, environmentally friendly community with multiple transportation options. The USX site is located near several existing Metra commuter rail stops. Renderings of the future development show multiple bicycle paths and CTA bus routes and list streetcars and water taxis as other potential modes of transportation. Bike-racing enthusiasts led by luxury-pet-goods mogul Emanuele Bianchi want to build the Chicago Velo Campus, an indoor racetrack and multisport complex, as the centerpiece of the development, and last summer they erected a temporary outdoor track on the site at 8615 South Burley.

At the recent press conference, Richard Tomlinson from Lakeside’s architecture firm Skidmore, Owings & Merrill promised, “Next-generation transit and walkable neighborhoods will make it possible to live in Lakeside without having to own a car.” 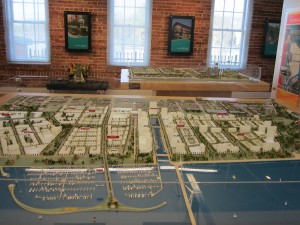 In keeping with the sustainability goals, the new boulevard will incorporate several green elements. The project includes bike lanes, permeable parking lanes to drain storm water, and a CTA bus turnaround, plus better pedestrian access to Rainbow Park, located just north of the USX site. Chicago Department of Transportation (CDOT) engineer John Sadler says it’s an interesting project to manage. “Being able to build a roadway where one doesn’t currently exist is an opportunity you don’t often get in Chicago,” he says.

Active Transportation Alliance’s Lee Crandell says the advocacy group encouraged CDOT to include the bike and pedestrian accommodations and he’s glad McCaffery is proposing a community with good access to sustainable transportation. “That speaks well of the future of the site and we’d like to see them take it as far as they can,” he says.

On the other hand, the development could bring some 20,000 new residents and thousands of additional cars to the Southeast Side, which might create pressure to actually extend the superhighway. South Shore Drive, the neighborhood street that connects the south end of LSD to the northwest corner of the USX site, is mostly a two-lane roadway. “As the development increases in density you’ll have to make sure you’re addressing all points of access,” says Mabwa. “Right now you have one lane southbound and one lane northbound, so there’s a little bit of a pinch there. That’s a future issue that has to be addressed.”

It would be difficult to add lanes to South Shore without razing dozens of existing structures, including apartment buildings and expensive lakefront homes. That might have been an option during the Urban Renewal era, when Mayor Richard J. Daley bulldozed entire neighborhoods to make room for expressways, but it wouldn’t fly nowadays. However, a McCaffery rendering appears to show South Shore transformed into a two-lane, one-way northbound street, with Exchange Avenue, the next major roadway to the west, converted to a one-way southbound. 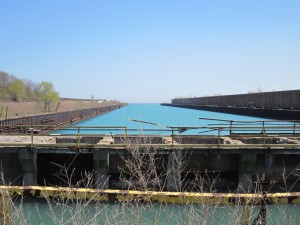 Is this a realistic scenario? “There’s a limited right-of-way on South Shore, so they’re going to have to come up with some kind of creative concept,” Mabwa says. “So relocating traffic two ways going south and two ways going north definitely has to be explored.” Sadler says he’s unaware of any plans by CDOT to modify South Shore to accommodate more cars, but he doesn’t rule out the possibility. “Any future traffic improvements on South Shore Drive will be dependent upon increased traffic demands,” he says.

Sustainable transportation advocate Michael Burton, whose Campaign for a Free and Clear Lakefront put out an only-half-joking call for completely “de-paving” LSD in the late 2000s, applauds the green aspects of the Lakeside proposal and says he’s relieved that the new four-lane boulevard won’t literally extend the superhighway to the USX site. But he cautions against changing South Shore to accommodate more motor vehicles in the future. “Urban planning that facilitates increased car traffic is fifty years behind the times,” he says. “Urban landscapes should be cherished, not raced through.”

Chainlink Bar Night Meet up with some of the 6,000-plus members of the local bike social networking site for drinks and karaoke at a River North messenger hangout. Thursday, April 19, The Blue Frog, 676 North LaSalle, thechainlink.org; 5-10pm; free.

Chicago South Side by “L” This train excursion traces the development of several South Side neighborhoods, including Bronzeville, Chinatown and the South Loop. Saturday April 21, Chicago Architecture Foundation, 224 South Michigan, architecture.org, 9:30am; $20.

Ride of Silence Organizing Meeting Help plan the Ride of Silence on May 16, an international bicycle event honoring those who have been killed or injured while biking. Wednesday, April 25, Heritage Bicycles, 2959 North Lincoln, rideofsilence.org/chicago, 6:30pm; free.