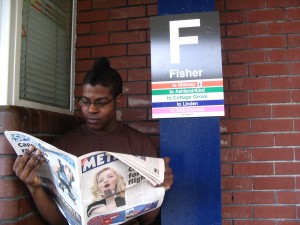 “I wouldn’t call it an obsession, ” said record-setting transit rider Adham Fisher via telephone last week. “And I wouldn’t call myself a trainspotter or a railfan because I don’t actually know about rolling stock, track gauge, infrastructure or anything like that. That isn’t what interests me about subway systems at all. I just like going around them as quickly as possible.”

Fisher, a twenty-seven year old native of Leicester, England whose day job is working at campsites during Formula 1 competitions, has made a hobby of racing around international transit systems. Following world-record-setting attempts on New York’s MTA and Toronto’s TTC earlier this month, he’s back in town this week trying to reclaim the title of fastest Chicago ‘L’ rider, and participating in a carload of other CTA-related events.

Fisher has traveled entire subway systems all over Europe, setting records in Paris, Madrid, Amsterdam and Brussels and making eleven unsuccessful attempts to get in Guinness for traversing the London Underground. In March 2011 he came to our city and set his first Stateside record, riding to all 143 CTA train stations in nine hours, thirty-six minutes, thirty-three seconds (9:36:33). Afterward CTA chief Forrest Claypool sent him an honorary station sign in recognition of his accomplishment.

The notion of a Brit holding the Chicago record didn’t sit well with Danny Resner, twenty-three, an editor at the children’s magazine Cricket who follows my transportation blog. Last winter he invited me to join him in his attempt to recapture the title, and on February 3 we shaved more than five minutes off Fisher’s time, clocking in at 9:30:59.

On April 6 the team of Scott Presslak and Kevin Olsta beat our time by almost seven minutes,
riding the whole system in nine hours, twenty-four minutes and five seconds. They accomplished this largely by using buses to travel between the termini of different color lines, minimizing backtracking. “We are truly masters of the CTA,” Olsta boasted on Facebook. “How long will our record stand? Only time will tell.”

The answer? A mere five days. On April 11, Robert Bielaski and Ben Downey took a similar approach and smashed the record by more than fifteen minutes, shrinking it to only 9:08:56. “It’s definitely a beatable number,” Bielaski emailed me. “If somebody used our strategy and got lucky at the southern end of the Green Line [where covering both the Cottage Grove and Ashland/63rd branches can eat up many precious minutes], they might be able to post a number around 8:45.”

By then Fisher was already planning his attempt to win back the Chicago crown. In Toronto he set the record, visiting sixty-nine stations in 2:46:01. But he was nineteen minutes short of getting in Guinness for covering all 468 New York subway stations, a grueling journey that took him 23:11:24. “When I reached the nineteen-hour mark it was a struggle to stay awake,” he said. “It was pure willpower that kept me going.”

Even if he fails again in Chicago, this should be a transit geek’s week to remember. On Tuesday, he donned a sports jacket made out of living sod by local artist Joe Baldwin and joined forces with Nikki Huber, winner of the Miss Earth Illinois environmentally-themed beauty pageant, decked out in an evening gown and tiara. They canvassed the busiest ‘L’ stations during rush hours, promoting Baldwin’s latest show, “Alterpolitan: An Indoor Sculpture Garden” (opens Thursday, May 3, 77 South Dearborn, noisivelvet.com, 5pm-8pm). The artist is also in talks with the CTA to produce “The Mobile Garden,” an installation of native plants on a flatbed railcar that would travel the system towed by trains. 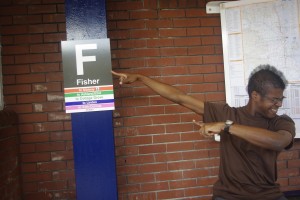 Fisher plans to make solo record attempts on Thursday and Friday. On Saturday at 11:30am he’ll be attending the one-hundredth-anniversary celebration at the Purple Line’s Linden stop in Wilmette, just down the street from the stately Baha’i Temple. Although village elders originally opposed the expansion of the rapid transit system into their suburb, on April Fool’s Day 1912, a construction crew built a tiny platform at Linden under cover of darkness, and service launched the next morning.

Following a speech by Forrest Claypool at the event, Fisher has invited all the current and former CTA champs to join him for a friendly ‘L’ riding race, leaving together from Linden but soon branching off in separate directions. Since a handful of Loop stations will be closed for weekend track reconstruction, we won’t be vying for a new record, but it will be interesting to see how the different teams fare on a level playing field. Afterwards we’ll take in a performance of “EL Stories,” featuring true tales from real-life commuters (11pm, Greenhouse Theater Center, 2257 North Lincoln, (773)404-7336, waltzingmechanics.org; $15).

When Fisher said he was excited about his CTA-packed Chicago sojourn, I confessed that while riding the entire ‘L’ was a fascinating experience, I’m not really looking forward to doing it again. “I felt slightly carsick the whole time,” I complained. “Do you actually think riding entire transit systems is a fun way to spend your day?”

“It is,” he replied. “I don’t know what the attraction is for me. I do something that ninety-nine percent of people that live in the city in question wouldn’t even consider doing. The vast majority of people hate public transit and only use it when necessary. All I know is that I did it once in London and several years later here I am on the other side of the Atlantic doing it, so it’s just one of those things.”