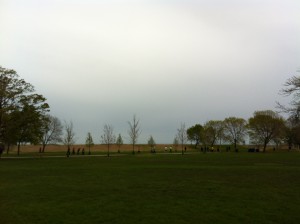 Thirty minutes before start time, with the temperature hovering in the mid-forties, the light rain that had been falling all morning has the courtesy to cut off, allowing everyone huddled under awnings and sponsor tents to take off their raincoats (and plastic bags) and do some stretching. This may be the cause of a brief backup in the gear-check line, but it also lets runners at the FirstMerit Bank Lakefront 10 Miler (previously known as the CARA Lakefront 10 Miler) to start on a dryer note, making the slightly chilly temperature feel a lot more amenable.

Starting in the middle of the street on Simonds Drive just north of Montrose Avenue, the elaborately structured ten-mile course (thankfully, not just an out and back) heads north to Foster Beach before heading back toward Montrose Beach and taking a bit of a winding path in order to incorporate Cricket Hill into the course and earn its cleverest tagline (“the hilliest course in Chicago”). The course transitions from streets to lakefront-trail pavement to park trails and even grass on Cricket Hill, providing a variety of running surfaces and plenty of turns. It’s a course that looks unnecessarily confusing on a map but plays out nicely with volunteers as guides, though some sections had runners going out next to runners coming back for a bit too long.

The rain makes a brief (not entirely unwelcome) reappearance about an hour into the run but thankfully no downpour ever kicks in. Mile markers are prominent at every mile and water stations are abundant. And the post-race party, despite the cold weather, delivers the goods (literally) with an abundance of free samples and a 312 beer. It’s well before noon but running ten miles earns you the right to drink early. Right? (Zach Freeman)

Course: 4. Points for a “lakefront” course that was much more than just out and back. Incorporating Cricket Hill into the course is also an exciting move for a Chicago run. A bit too much overlap on the course with runners running out right past runners coming back.
Organization (bag check, etc.): 4. Shirts weren’t ready for pre-race packet pick-up. Gear check was easy but some bags got left in the rain during the race.
Goodie Bag (includes shirt): 5. First long-sleeve running shirt of the season. Nice design. Lots of Clif goodies in the bag and no paper clutter since that was all moved online (very nice “virtual” goodie bag).
Weather: 3. Mid-forties and overcast was pleasurable… but the light rain put a damper on things.
Overall: 3.75. Recommended Race. Creative and well-manned course, great post-race setup and chilly but enjoyable weather. And Cricket Hill…