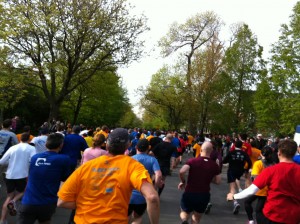 The sixteenth annual Ravenswood Run lived up to its billing as “a neighborhood 5k,” raising funds to support the work of Ravenswood Community Services and making ample use of the relatively sleepy streets of the area to provide a wide tree-lined (and car-free) course for the roughly 2,750 participants.

Starting waves were evenly spaced along Hermitage with ample room allowed for each grouping. Runners with strollers or dogs were allowed, though asked to start in the back of the pack. Despite pre-race warnings that “the course is gonna be a little cozy out there” the only real congestion happened at the starting line (heading south on Hermitage at Wilson) and dissipated quickly enough. Runners were also warned to look out for several speedbumps on the long straightaways down both Hermitage and Paulina, but flag-waving volunteers and shiny orange tape made them easy to spot. The mild weather (partly cloudy and in the high forties) brought out the occasional sidewalk spectators, adding an additional feeling of community to the proceedings.

The finish line brought runners down Wilson and through a block and a half of refreshment tables and post-race sponsor booths featuring cinnamon buns, Stewart’s Coffee and CLIF energy bars as well as product demos and a raffle, with the streamlined gear check situated at the very end. The layout allowed for a clean and directed exit (unless you wanted to turn around and head west again). Importantly, to those who appreciate green efforts, volunteers monitored trash and recycle bins to ensure everything made it in the proper bin.

The idea of a run being a neighborhood event is a good one and Ravenswood Run clearly touts the concept—the next step would be to incorporate nearby venues in the pre- and post-race proceedings, allowing for a full-on neighborhood celebration. (Zach Freeman)

Course: 5. Quiet, tree-lined streets with lots of volunteers and smiling spectators. Easy-to-spot mile markers with clocks. Lots of safety precautions taken regarding speedbumps.
Organization (gear check, etc.): 5. Water station where it should be, lots of volunteers and streamlined gear check. Easy packet pick-up at Fleet Feet (a race sponsor).
Goodie Bag (includes shirt): 4. Truly great Mizuno Quickdry Plus shirt (the bright orange color and simple logo coupled with the quality make it my favorite so far this year). Not much else in the bag.
Weather: 4. High forties and overcast—near perfect.
Overall: 4.5. Recommended Race. “A neighborhood 5k” is both what this race claims to be and what it actually is.  A fun, low-key run down residential streets.