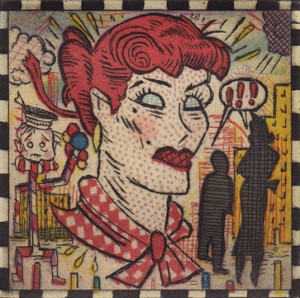 All through grade school, lunch time was ruled by the lunch ladies. They were usually the mothers of our fellow students, but once in a while, depending on the school, they hired a professional lunch lady. Her job was to break up fights, make sure kids cleaned up after themselves and head off any smoking or finger-banging sessions in the bathrooms.

They were pretty much a miserable lot who couldn’t wait to rat you out to the nuns, (who, in turn, ratted you out to your parents), all of them slapping the shit out of you each step of the way.

The mothers of fellow students made the best lunch ladies. They were a little nicer, though not always.

Mrs. Hildenburger fucking hated me and used to grab me with her big kraut hands and yell in my face about what a rotten kid I was. She had terrible breath, like she’d been gargling turds or something. She always told me she was going to call my mother and tell her what a snotty kid I was. She scared the fuck out of me. She’d jack me, even when I hadn’t done anything wrong.

She would usually busy herself with her crossword puzzles, one eye peeled for the opening salvo of the more-than-occasional food-fight. I liked throwing pudding. The Jell-O chocolate pudding was the best because that stuff splattered so beautifully. Regular Jell-O was okay, too. And oranges and soft tomatoes. I liked stuff that exploded and got four or five people at once. We called it “fragmentation food.”

In Catholic school, twice a month, there were “Hot Dog Days.” For forty cents you got a hot dog, chips and a soda. It was wildly popular. It worked so well, they decided to try a “Sloppy Joe Day” so they could chisel us for sixty cents.

Bad move. Sloppy Joe Day turned into the most ugly food fight in the history of Christ the King School.

Man, did that stuff fly. At the end of lunch, it looked like Jabba the Hutt wiped his ass with the place.

The Lunch Ladies would go mental during food fights because every kid in the room would fling shit with wild abandon. Mostly, they would hide behind desks and yell shit. They’d threaten to call all of our parents, but we knew that was bullshit. They’d have to call seventy parents. Mostly they had to wait until we ran out of shit to throw.

There was one lunch lady who was a younger woman; a lithe, pert, Suzy Creamcheese-looking gal with a perfect rack and flaming red hair.

“It’s weird though,” one kid mused, “they’re either Penthouse Pets… or outhouse pets.”

With pointy breasts that were hypnotic.

One day, she was around a corner and she heard us talking about her breasts, musing on several scenarios of filth, all of which involved the participation of her breasts.

Miss Hirst went out of her fucking mind and reported us to Mr. Mandeville, a shaved-ape from Indiana, who taught sixth grade and who also could not stop staring at Miss Hirst’s rack.

While Mr. Mandeville was giving us a “good talking to,” this kid, Steve Lorenzi, queried out loud, “Do you think she has red SNATCH hair, too?”

Mr. Mandeville stopped mid-sentence. We could tell he was thinking about it as well.

After about five seconds, he started yelling at us again—but he couldn’t keep a straight face and finally we were all laughing and he sent us back to class with the admonishment, “You assholes will all wind up in reform school.” But his heart wasn’t really in it; he was still laughing.

After school we saw Mr. Mandeville comforting Miss Hirst, assuring her that he’d knocked us around pretty good and that he was deeply offended she had been subjected to such vile curiosities.

Five months later… they were married.

I guess he just HAD to know.