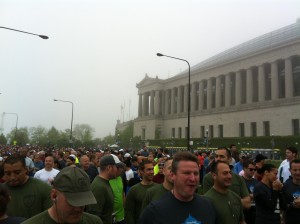 Following the distant sounds of bagpipes along the fog-engulfed lake-facing side of Soldier Field is a good race-day introduction to a race’s basecamp. The 8th Annual Run to Remember took up its traditional starting post on Museum Campus Drive directly in front of the Gold Star Families Memorial and Park where the names of officers who gave their lives in the line of duty are etched. Recently wounded officer Del Pearson was present to thank participants for their support and to help kick off the race.

Despite numbering roughly 4, 000 strong, runners and walkers weren’t necessarily organized into pace groups. The closest attempt at pace coordination was an announcement that “Anyone running five-minute miles should get in the front. And everyone else should get behind them.” This led to some bottlenecks around the start as the course transferred from Museum Campus Drive to trails leading between the Field Museum and the Shedd Aquarium. Additionally, racers took up both sides of the Lakefront Trail heading north along Lake Shore Drive, but returning along the wider Harbor Walk and circling around the aquarium was much more accommodating.

Coming out of the tunnel under Solidarity Drive proved to be a surprisingly powerful moment as the final stretch of the course was lined with names and photos of the more-than-550 fallen officers dating from 1853 to last year. The water station in the middle of the course was well-supported by cheering volunteers and supposedly offered both water AND beer (I didn’t investigate the latter). The post-race offerings were especially diverse, including everything from cookies to pizza to frozen bananas. Arranging the sponsor booths in a circle on a grassy lawn made it easy for a group gathering when winning teams and individuals were announced. (Zach Freeman)

Course: 4.
Organization (bag check, etc.): 4. Packet pickup at The Chicago Police Academy provided both a unique location and an extremely well-coordinated pickup. Pace groups at the starting line would have been helpful.
Goodie Bag (includes shirt): 5. Not only a nice-looking Nike shirt, but a well-designed zippered gear-check bag filled with goodies!
Weather: 4. Fog and a slight chill afterwards. Right at the point where a jacket is too warm and no jacket is a bit chilly.
Overall: 4.25. Recommended Race. A foggy morning run along the lakefront and through Museum Campus with a moving finale. Plus a great post-race celebration.