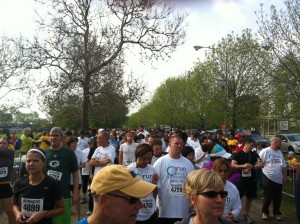 The start of the 5th annual C4 Miles four-mile race was delayed by about ten minutes because, as announcer (and K-Hits DJ) Gary Spears remarked “Some people slept in a little late this morning.” Luckily, the time was used wisely, with a trainer from Phenomenal Fitness leading the small crowd through a “three-dimensional” workout in which he repeatedly entreated runners and walkers to “Feel your booty!” After the warm-up, participants gathered at the start/finish area, placed a bit awkwardly to the south of the base-camp. For this size race (around 175 runners and maybe 200 walkers) pace-groups were almost a non-issue, with walkers simply lining up behind runners.

The course started off heading north along the gravel trail across the street from the Peggy Notebaert Nature Museum before crossing under Lake Shore Drive just before Belmont (near Barry) and following the Lakefront Trail past Belmont Harbor, looping around Waveland Park and heading south again. As anyone who’s run along the Lakefront can attest, this is a nice route, and the small amount of runners made it sometimes feel like an individualized run decked out with mile markers and water stations.

To be sure, this was a charity race done on a shoestring budget, but energetic volunteers waving flags at possible points of confusion on the course and stationed at the two water stations (one just after mile two and one serving double duty at miles one and three) helped keep energy levels high. Post-race goodies included coffee, donuts and bagels. (Zach Freeman)

Course: 3. Mostly along the Lakefront Trail. For such a small race this sometimes made it feel like an unofficial individual run along the lake, especially when bikes or other (non-racing) runners passed by.
Organization (gear check, etc.): 4. Gear check and packet pickup were incredibly easy. Ten-minute delay on starting the race.
Goodie Bag (includes shirt): 2. Fairly plain white cotton t-shirt and not much else. The yellow shirts worn by the volunteers were a little cooler.
Weather: 5. High fifties and overcast. Ideal weather.
Overall: 3.5. Recommended Race. More than most runs, the volunteers really made this race a good one. Without a large pack of official runners, directing a race along the Lakefront Trail can result in some confusion for both participants and those just out for a morning run.