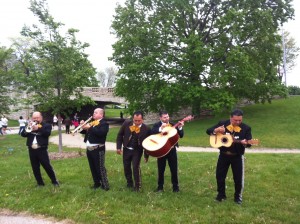 From COMIENZO to FIN, this year’s Cinco de Miler (relocated from last year’s Soldier Field location to Montrose Harbor) was a demonstration in how a well-run race can become a full-fledged event. From a five-piece mariachi band that made two appearances along the five-mile course to a grassy post-race space where a live band played and chips and salsa, burritos and churros (not to mention a free Modelo for those over twenty-one) were passed out to well-spaced waves that kept the course from ever becoming crowded, RAM Racing managed to create a race atmosphere that both encouraged competition and reminded runners to have fun.

Starting in ten separate waves on a blocked-off section of Simonds Drive and heading north along running paths all the way to Hollywood before heading south again down the Lakefront Trail, the course incorporated a few different types of terrain and avoided the trap of being an out-and-back run. For extra motivation, the finish line boasted an incredibly energetic announcer, who physically stationed himself on the course and yelled into his microphone while interacting with both the crowd and the finishers.

The weather cooperated, sticking in the low sixties and threatening (though never delivering) rain. The standard wind blowing off the lake kept the course cool without necessitating a jacket. With almost 5,000 participants, the majority enjoying an early morning beer (but not til 10:30am, as city regulations require), the post-race party was even more festive than usual, clearing up any concerns that Cinco de Mayo celebrations can only be enjoyed on the fifth of May. (Zach Freeman)