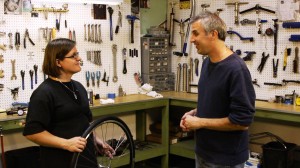 As a sustainable transportation devotee, sometimes I have to remind myself that not everyone in this country is as fanatical about biking as I am. But “Pedal America,” a new travel series on PBS created and produced by Chicagoan Ira David Levy, aims to spread the gospel of cycling to the unconverted. “I think that with a lot of bike advocacy, we tend to talk to each other, people who are already enthused,” he says over drinks at a Gold Coast café. “But if you’re going to reach the masses you need to find a way that does not come across as overly political. So I work in a little bit of advocacy in each episode but I try not to be too preachy.”

During the seven-part series, which airs on 356 public-TV stations nationwide, Levy and co-host Kati Lightholder explore bicycle-friendly cities and national parks all over the United States, checking out the best rides, events, bike infrastructure and tourist attractions. Each thirty-minute episode covers a different destination, including Austin, Texas; Napa Valley, California; Sedona, Arizona; Savannah, Georgia; Raystown Lake, Pennsylvania; Tampa-St. Petersburg, Florida and, of course, the Windy City. In the process, they showcase cycling as a cheap, healthy, fun and green way to get around a new locale. “The whole premise of the show is to educate and inspire people to ride their bikes,” he says.

Levy, forty-eight, has a passion for long training rides up the lakefront and cross-country bike touring, and in 2002 he organized a charity ride from Seattle to San Francisco to New York City to raise college funds for children who lost parents on September 11. Recently, after sixteen years of teaching journalism and media studies at Wright College on Chicago’s Northwest Side, he decided he was ready for a change. “I thought about how could I bring all my interests together, do something that I love and continue to educate people,” he says. “I was driving to school one day and it was like a lightbulb—boom—out of nowhere. I decided to produce a television show about bicycling.” 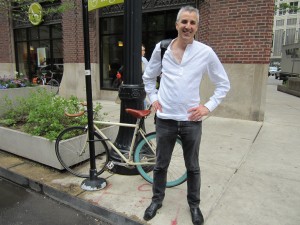 According to Levy, the Chicago episode highlights the bike-friendly features that earned our city a silver rating with the League of American Bicyclists advocacy organization, as well as visiting some of his favorite local hangouts. Starting in Hyde Park, he and Lightholder spin up the Lakefront Trail to the Museum of Contemporary Art and take in a play at the Lookingglass Theatre—both institutions are a stone’s throw from his apartment. After showing viewers how to use the bicycle-carrying racks on CTA buses, they cruise up the Wells Street bike lane to grab a bite at an Old Town eatery. “For a broad appeal you really have to focus on the travel aspect,” he says. “So we tried to pick places that are fun and interesting but also bicycle-friendly.”

Although the Chicago show was not available for preview, Levy let me watch the Sedona episode, and the gorgeous footage of mountain biking in Red Rock State Park made me yearn to be out West pedaling among the vortexes. The show also features a discussion of why many women find bicycling to be a great female bonding activity, and enough coverage of the local gallery, spa and yoga scene to keep non-cyclists engaged. I was particularly interested to hear Sedona bike coordinator Dave Singer talk about the successful battle to redesign Highway 179 as a scenic route with wide bike lanes instead of a high-speed four-lane.

In addition to travel info, most episodes feature tips on bike safety as well as a “Bike Tech 101” segment filmed at Rapid Transit Cycleshop in Wicker Park with owners Justyna Frank and Chris Stodder and manager Sam Van Dellen. “We tell you what each component of the bicycle is, what it means, how it works with the rest of the bike and how you can fix it,” Levy says. “With most people I know who are not expert cyclists, when they go into a shop people sometimes talk down to them or speak in a language that they don’t understand. So we tried to break down that barrier.”

Although the “Pedal America” series seems like a great way to expose a new demographic to the joy of cycling, I tell Levy that I was surprised to see that Subaru is the program’s lead advertiser. After all, in 2003 the Chicagoland Bicycle Federation pulled out of the Chicago Bike Show after Subaru came on as title sponsor, arguing that having SUVs parked in the exhibit space undermined the nonprofit’s mission of promoting safer streets for cyclists. “This is sort of like Jack Daniel’s being the title sponsor of a Mothers Against Drunk Driving event,” CBF director Randy Neufeld explained at the time.

“I’m proud to have Subaru as our anchor sponsor,” Levy responds. “They realize that there is a place for both cars and bicycles on the road. They’re a ‘zero-landfill’ company, and they partner with International Mountain Biking Association to secure trails in our national and state parks.” On the other hand, he acknowledges that corporations sometimes pay to associate themselves with bicycling in order to make their products seem green or healthy. Although the Chicago episode features the McDonald’s Cycle Center, a commuter facility in Millennium Park offering indoor parking for 300 bikes, showers, lockers and rentals, he says he avoided mentioning the name of the fast-food giant on air.

Sponsorship issues aside, Levy hopes that by portraying bicycle travel as a safe, enjoyable way to explore your environment with friends and family, “Pedal America” will motivate viewers to dust off their bikes, pump up the tires and hit the road. “And if we present drivers with images of cyclists and cars sharing the road, maybe we can reach some of those drivers,” he says. “Maybe someday they’ll say, ‘Oh, I think I’m going to bike to work instead of getting in my car.’ Or maybe it will just make them more tolerant when they see cyclists in the street.”

“Pedal America” debuts on WTTW Channel 11 on Saturday, May 12, at 11 am. More info at pedalamerica.tv.

Tour of the Near West Side Learn about the history of this diverse community area, including Greektown, Little Italy, University Village, the United Center and more on this guided bike tour by architecture buff Lee Diamond. Saturday, May 12, Union Park, 1501 West Randolph, (773)255-6347, chicagovelo.com, 11am-4pm; $9.

Bike-In movie at the Hideout The music venue hosts an outdoor screening of the 1964 concert  film The T.A.M.I. Show featuring James Brown, The Rolling Stones, Marvin Gaye, Jan and Dean and others. Sunday May 13, The Hideout, 1354 West Wabansia, (773)227-4433, hideoutchicago.com, 8pm; free.

Bloomingdale Trail community meeting This public-input session for the elevated greenway will focus on the access points and parks adjacent to the trail. Tuesday, May 15, Humboldt Park Fieldhouse, 1440 North Sacramento, (312)750-9820, bloomingdaletrail.org, 6pm; free.