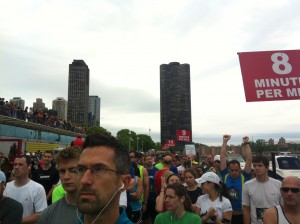 Half an hour into the fourth annual Magellan Development Group Chicago Spring Half Marathon a pleasantly cool thirty-percent chance of showers quickly transformed into a one-hundred-percent downpour that kept up for the next hour. Combined with the strong winds, this was certainly not a welcome development for the roughly 1,500 half marathoners along the out-and-back lakefront course. It’s the kind of weather that makes participants in a half marathon feel bold for pushing through while making those just out for a morning run seem like masochists. On the plus side, it’s also the kind of race weather that leads to commiseration and a sense of togetherness.

Starting in a cleanly organized chute at DuSable Harbor, the course quickly jumped onto the Lakefront Trail, passing through Museum Campus and then heading straight south, making a quick about-face right after the hill at 47th Street (probably the most notable hill on the trail). While certainly a scenic route, it was also fairly uninspired, leaning heavily on the Lakefront Trail in both directions, with runners going back spending a good deal of time running past runners going out. Two bands performed on the course through the rain (one under a bridge), giving a lively boost to the course. Water stations were well-stocked and volunteers were helpful.

The final leg of the race crossed under Lake Shore Drive, finishing on the north end of the insular and picturesque Lakeshore East Park. Both basecamp and the post-race celebration were stationed here in a format that made great use of the park’s open space and trails, with a full breakfast offered as part of the post-race picnic.

A 10K started thirty minutes after the half and followed a shorter version of the same course. (Zach Freeman)

Course: 3. Out and back along the Lakefront Trail—not very imaginative and lots of passing runners going the opposite direction. Two bands playing (even in the rain) added a touch of celebration. Nice finish line in The Park at Lakeshore East.
Organization (bag check, etc.): 3. Early packet pickup was simple, day-of looked like a hassle. Lines for gear check (both before and after the race) were much too long. This race needed many more volunteers than it had. Plenty of water stations on the trail, though.
Goodie Bag (includes shirt): 3. Really nice green running shirt and a few other goodies.
Weather: 3. Rain, wind and cold. But enough of a trudge to give runners bragging rights.
Overall: 3. Recommended Race. Weather put a damper on things but otherwise it’s a well-coordinated run on the Lakefront with a uniquely placed basecamp. Could use more volunteers.